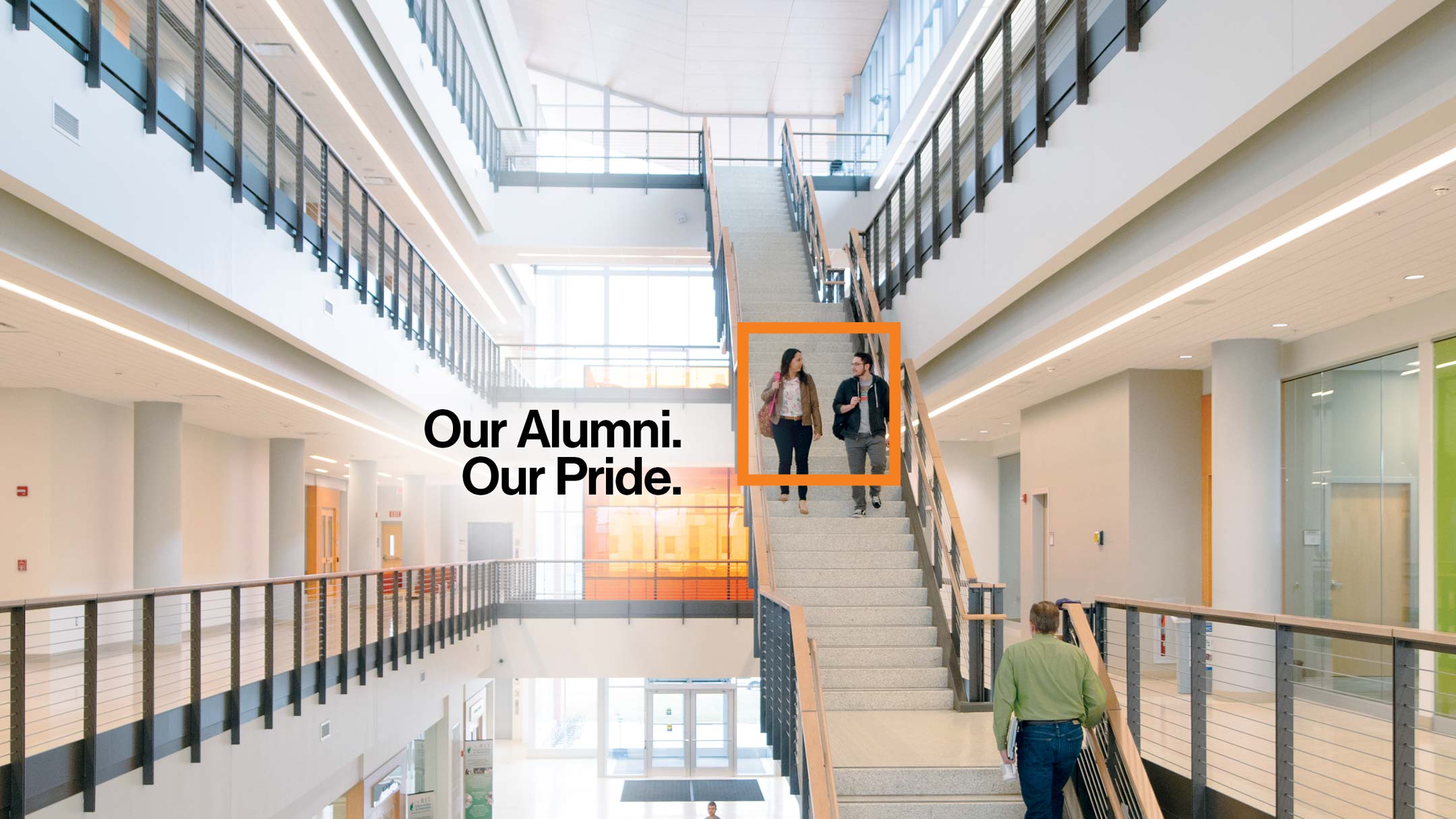 RIT Kosovo (formerly known as American University in Kosovo) will be well represented by alumni in the national and local government administration in the region.

The following RIT Kosovo (A.U.K) alumni will be among the government executives and municipality leadership. 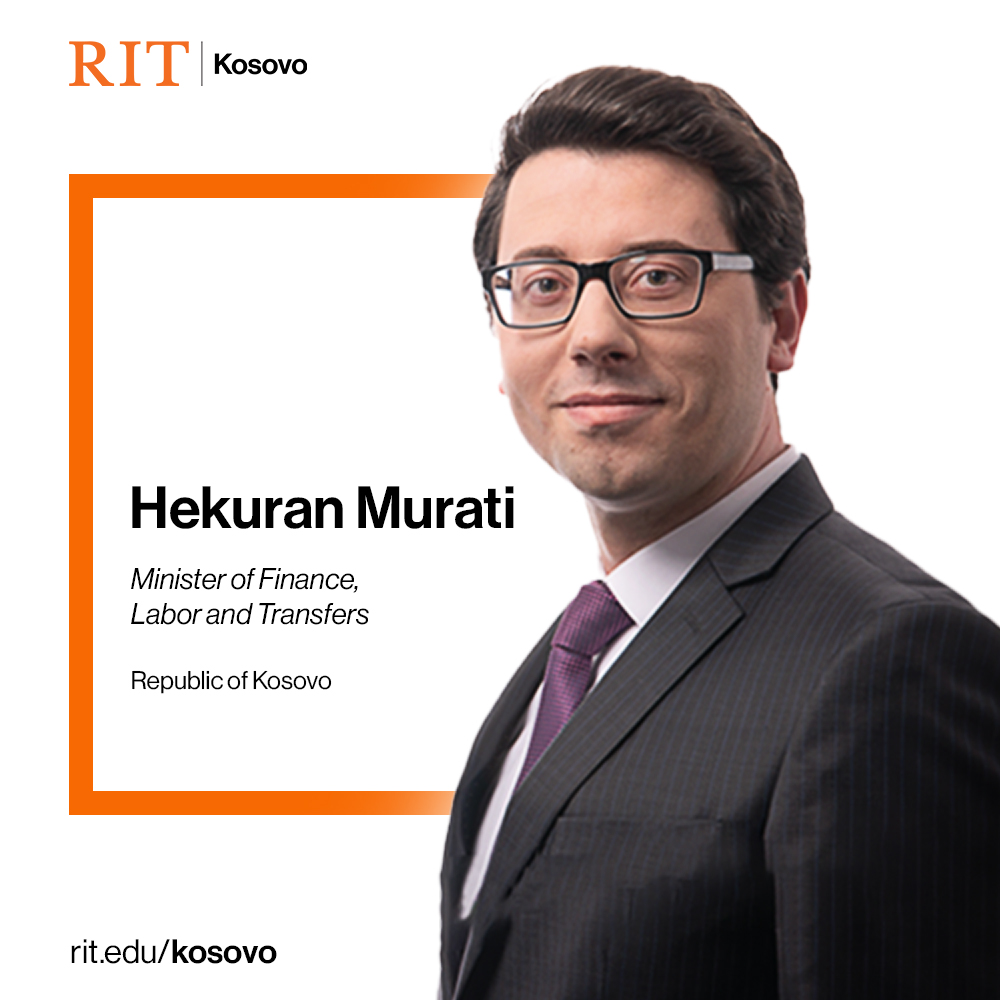 Hekuran Murati (BSc ’08)
Hekuran Murati was appointed Minister of Finance and Transfers in the Government of the Republic of Kosovo in 2021. Hekuran has built an extensive career in finance since graduating from RIT Kosovo (A.U.K) in 2008 earning a Bachelor Degree in Applied Arts and Science. He has held various positions in the past, serving as financial analyst and consultant in the Ministry of Finance, Central Bank of Kosovo and the World Bank. He also has served as a member of the parliament in the 7th legislature of the Assembly of the Republic of Kosovo in 2019 and 2020. 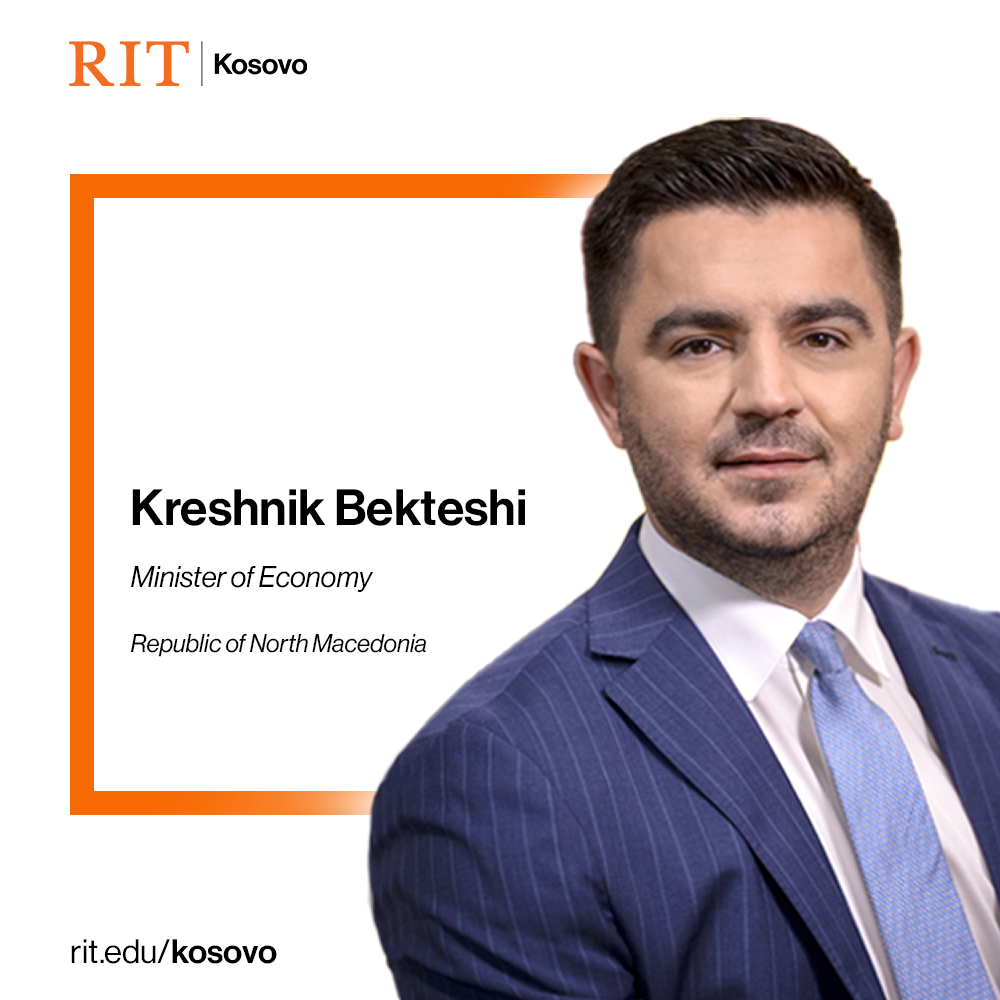 Kreshnik Bekteshi (BSc ’08)
Kreshnik Bekteshi was appointed Minister of Economy in the Government of the Republic of North Macedonia in 2017 and reappointed in 2020. In January 16, 2022 elections, Kreshnik once again retained his post. Right after graduating from RIT Kosovo (A.U.K) in 2008 with a degree in Management and Public Policy, Kreshnik was appointed the Head of the International Office of the Agency for Foreign Direct Investment and Export Promotion of the Republic of Macedonia, promoting the business climate of Macedonia by attracting foreign direct investments from EU countries in pursuing joint business cooperation. 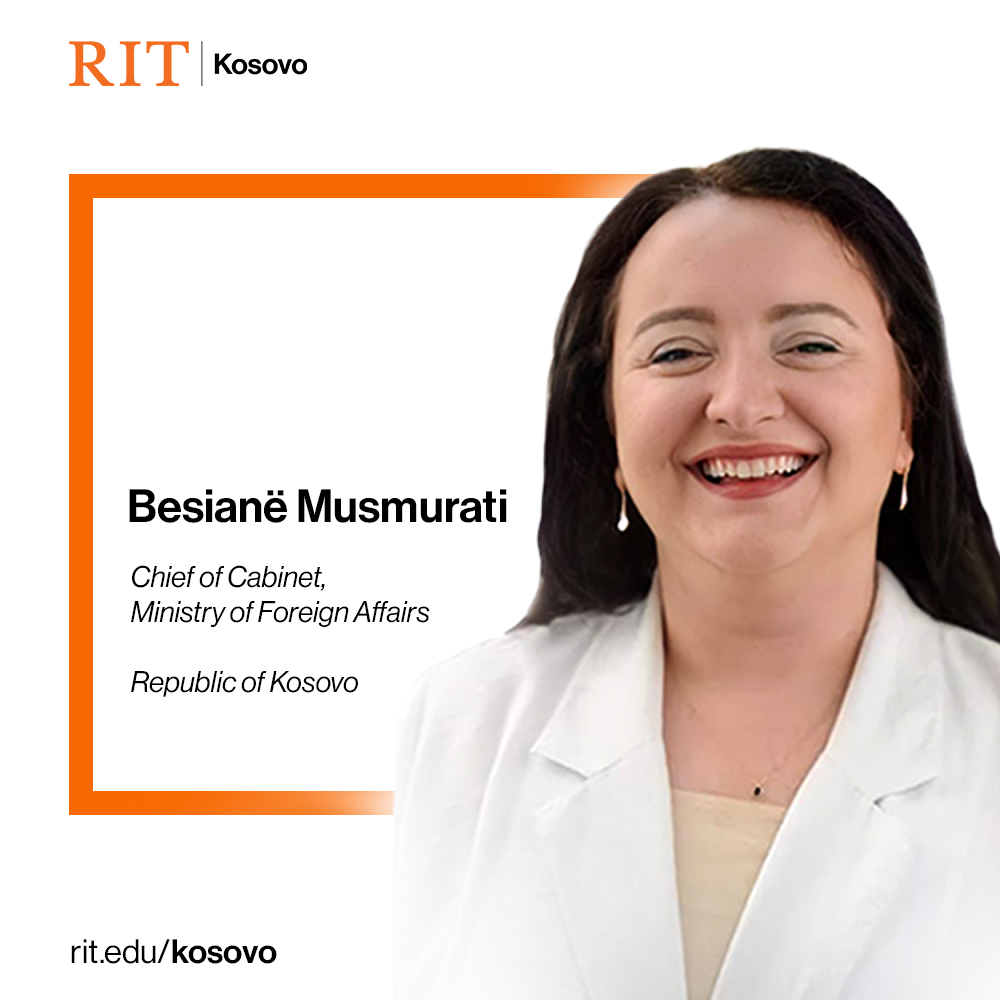 Besianë Musmurati (BSc ’12)
Besianë Musmurati was appointed as Director of Education in Prishtina, Republic of Kosovo in 2022. Besianë graduated from RIT Kosovo (A.U.K) in 2012 with concentrations in Management and Public Policy and pursued her Master studies in European Politics and Policies at the Catholic University of Leuven after winning the Young Cells Scheme scholarship funded by the EU. Since 2014, Besianë served as a diplomat in the Embassy of the Republic of Kosovo in the United States and in the Ministry of Foreign Affairs in Kosovo. 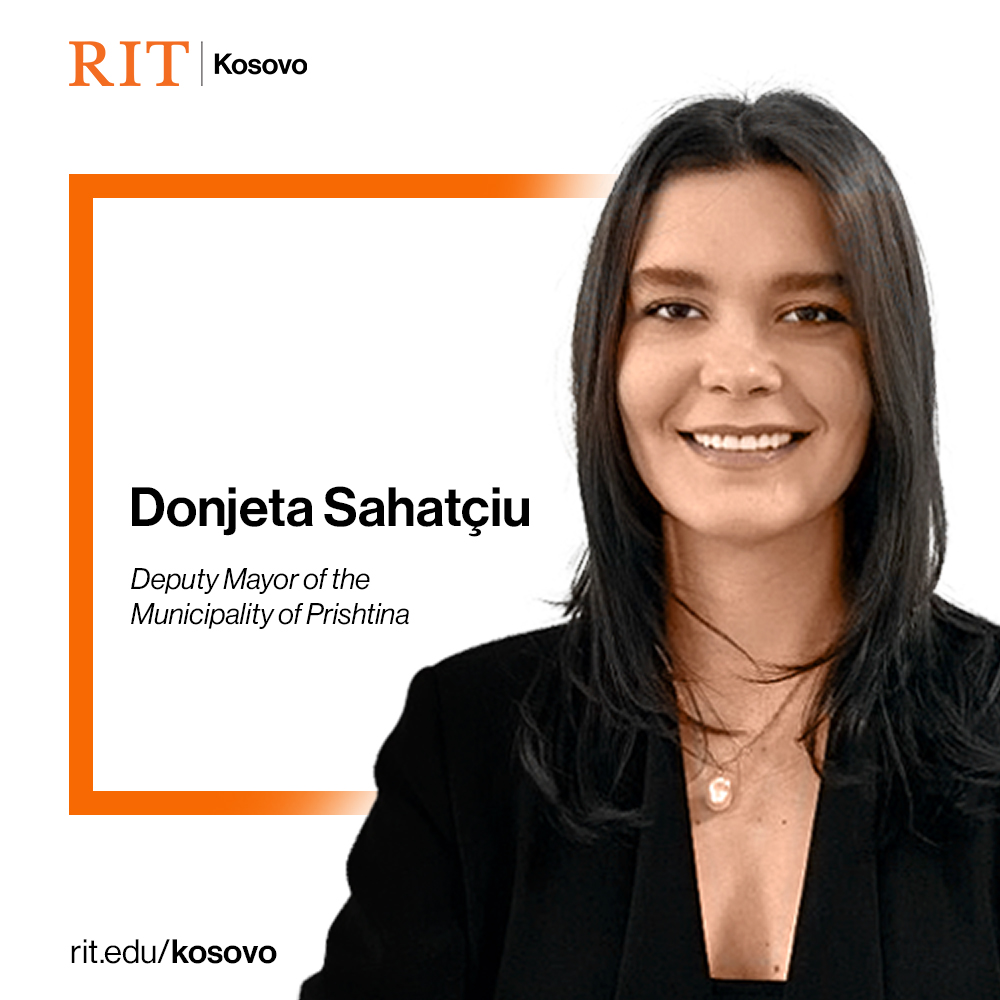 Donjeta Sahatçiu (BSc ’12)
Donjeta Sahatçiu has been appointed as the first woman deputy mayor of the Capital of Republic of Kosovo, Prishtina in February, 2022. She holds a Bachelor's Degree with concentrations in Management and Economics & Statistics from RIT Kosovo (A.U.K) and has completed her Executive MBA at the University of Sheffield. Until recently, Donjeta served as a trustee in the RIT Kosovo (A.U.K) Board of Trustees, board member of STIKK and VentureUP. Donjeta comes from the business sector leading a team of 25 design and IT professionals at Rrota, a well-established digital communications agency in Prishtina where she serves as a partner. Donjeta is also the youngest female entrepreneur in the ICT sector in Kosovo. 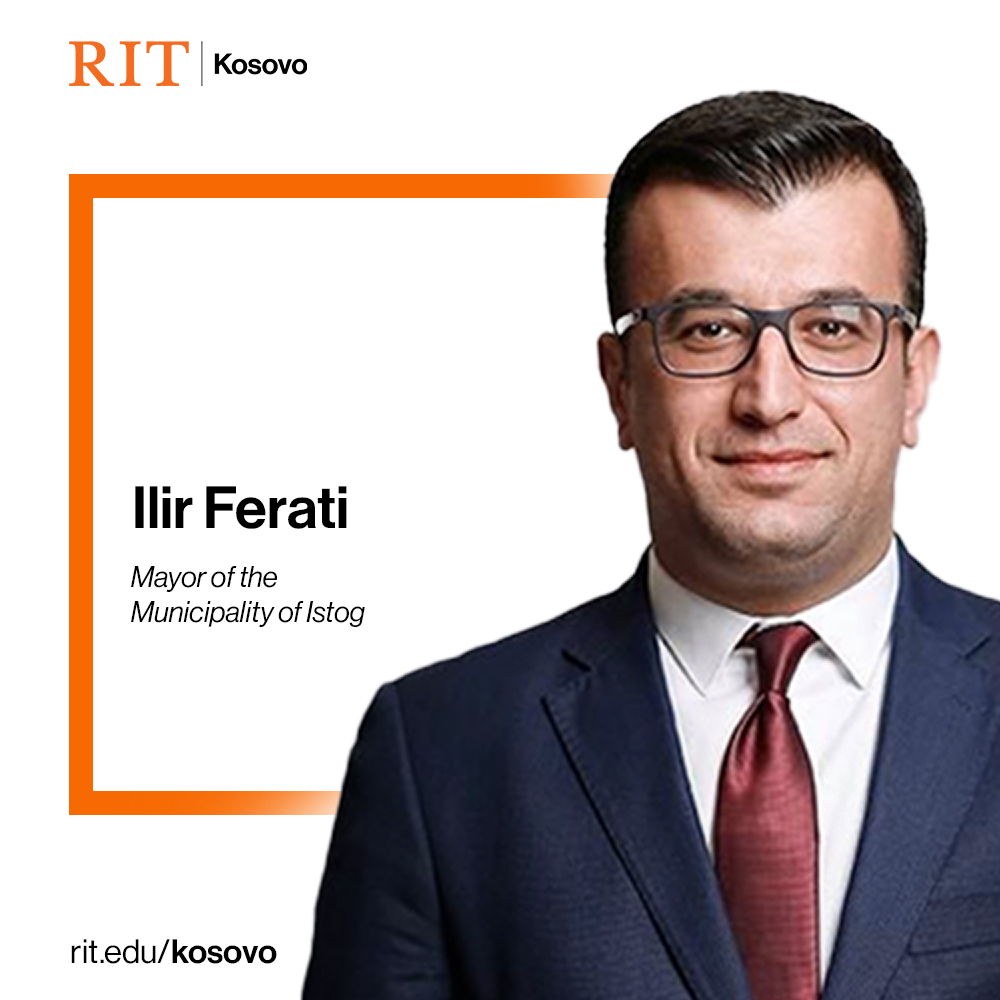 Ilir Ferati (BSc ’13)
Ilir Ferati has been inaugurated as the city mayor of Istog, Republic of Kosovo in 2021. Ilir earned his Bachelor in Applied Arts and Science, with concentrations in Management and Public Policy from RIT Kosovo (A.U.K). Right after graduation, Ilir served as a senior project officer in the Economic Development Department in the municipality of Istog. As a civil servant, Ilir was engaged in attracting investments for the development of mountain tourism in Istog as well as in providing grants and municipal support to the citizens and businesses of Istog. In 2019, he was elected as member of the parliament of the Assembly of the Republic of Kosovo.

We wish them the best of luck in these endeavors and we are extremely proud that our alumni are making a significant role in the Kosovo’s economic and social transformation.