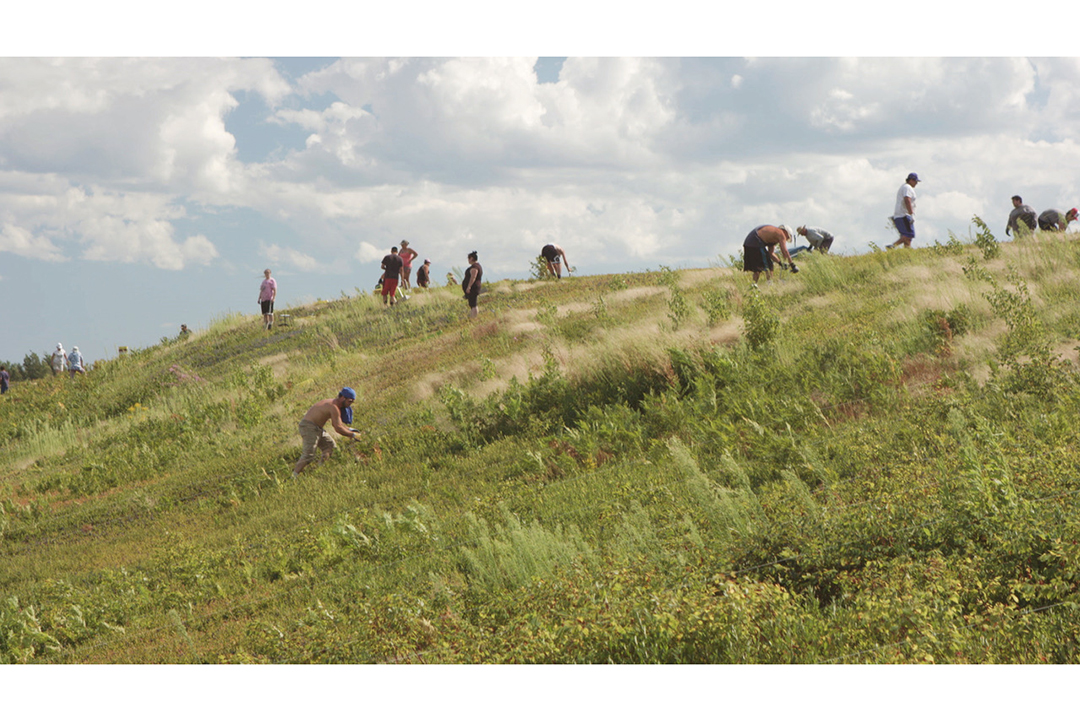 “Voices from the Barrens, Native People, Blueberries and Sovereignty” was selected for a handful of film festivals this fall.

The vitality of the creative community within RIT’s School of Film and Animation took center stage in the making of a documentary selected for five film festival screenings this fall.

“Voices from the Barrens: Native People, Blueberries and Sovereignty” featured a creative team with more than a dozen faculty and alumni from the school.

“All filmmaking is a team effort, and if you want to make films, you have to have these relationships with people,” said School of Film and Animation Professor Cat Ashworth, editor of the documentary. “Relationships are built on trust and knowledge of skill set. You built up trust and respect for their own creative and aesthetic work, so you know what you’re getting.”

“Voices from the Barrens” documents a cherished ritual of the Wabanaki People — their annual blueberry harvest. It sees the Mi’kmaq and Maliseet tribes from the maritime provinces of Canada journey across the U.S.-Canada border to join their Wabanaki brothers and sisters, the Passamaquoddy of Maine, in the tradition of hand-raking wild blueberries.

“I’m thrilled that there is a market for this,” Ashworth said.

As the film’s editor, Ashworth worked with more than 200 hours of footage, weaving together the individual stories and experiences of interview subjects into a 60-minute documentary.

The lengthy list of Film and Animation alumni who worked on “Voices from the Barrens” includes:

It was a creative process touched by RIT alumni and faculty every step of the way.

“It’s really based on being a part of a community of makers,” Ashworth said. “And the only way we’re going to ever make anything is to have all of these relationships with people who have skills.”

Ghertner’s idea for the film sprouted shortly after growing involved with advocating for farmworker rights and subsequently documenting labor and agriculture for another documentary, “After I Pick the Fruit.” A continued interest then led her on a research trip to the blueberry barrens of Maine, where she met the Indigenous people who became the subjects of “Voices from the Barrens.”

“When I was able to start filming, I reached out to my former teaching assistant, Vanessa Ward and (then) MFA student Vicky Mejia Yepes to form a small crew for the 2014 harvest,” Ghertner said. “The relationships we formed and collaborative spirit in the School of Film and Animation created an incredible field experience that year.”

Soon after, Ghertner added other alumni, Ganyer and Evans, to the production team. And when it was time for post-production, Ghertner said, “it was Cat Ashworth and our working relationship that brought the story to life.”

“We collaborated in a unique way technically, aesthetically and editorially,” Ghertner said. “I feel that the sensitivity to the experiences and life of the Wabanaki’s story in this film are aspects of the creative team’s shared experiences in the School of Film and Animation.”

Projects like “Voices from the Barrens” is one example of how the School of Film and Animation’s professional network stays connected. And the accessibility of such collaboration is among the reasons Ashworth has enjoyed her time at RIT.

“We have a supportive community,” she said. “Not only at RIT, but Rochester has a great art scene, wonderful venues for exhibition and the whole region supports filmmaking.”

Ashworth is retiring at the end of the academic year after 30 years at the university.

“I never felt like I was passing on my knowledge to my students,” Ashworth said. “I felt like we were always working together. The students’ ideas are really fresh, and I’m just collaborating with them, helping them along. That’s what I will miss the most.”

Ashworth said her RIT career has been guided by a personal philosophy of “I teach so that I can make films.”

She is an accomplished filmmaker who brings real-world experience and an understanding of the latest technology to her classroom. Between her constant engagement in film projects and teaching, Ashworth said she has often felt like she has two full-time jobs. But they combined to create enriching experiences for herself and students.

“In the end, it’s rewarding to stay connected to what you’re teaching,” she said, “and it allows you to evolve.”

To Ghertner, Ashworth’s many contributions to RIT are highlighted by her support of women filmmakers. Ashworth is a longtime organizer of the Women of SOFA (School of Film and Animation) program, an annual presentation of short films by female students at the High Falls Women’s Film Festival.

Ashworth has been creating video artworks, documentaries and educational programs for more than 40 years. She’s directed award-winning films, including 2015’s “Iroquois Creation Story,” which combines animation and dance to tell the ancient story of how the world came to be according to the Haudensaunee.

“Working with images and making films are what give me energy and life force,” she said.