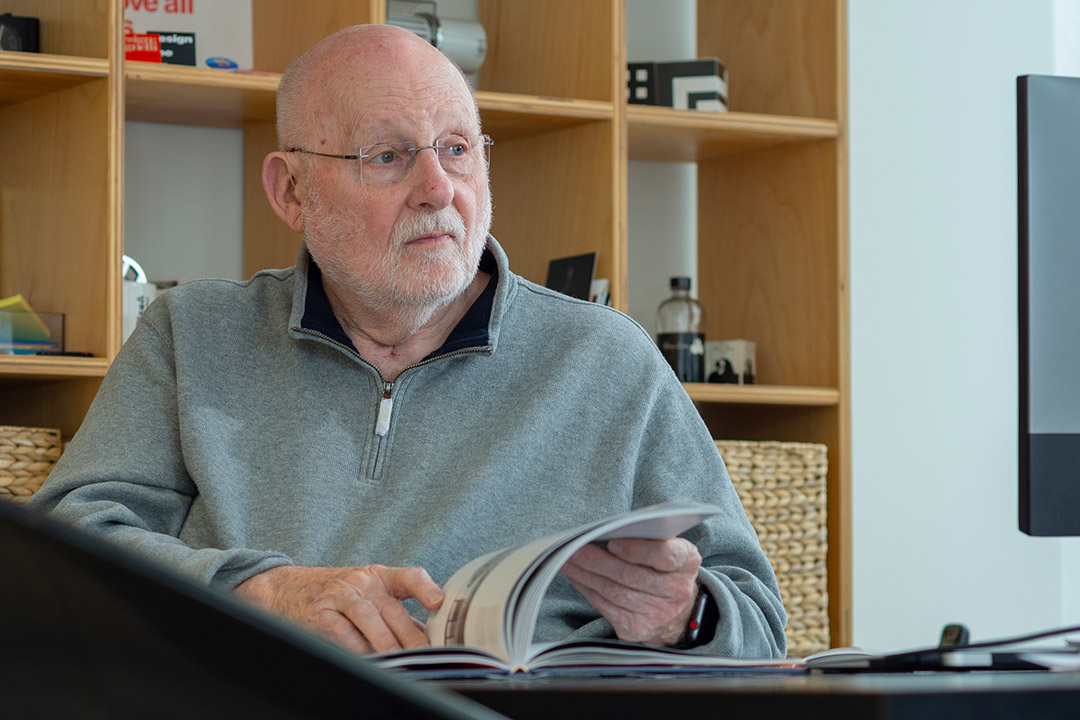 R. Roger Remington, the Vignelli Distinguished Professor of Design and longest-serving faculty member at RIT, will retire in May after almost six decades.

While he’ll soon step away from the day-to-day at the university to which he has dedicated nearly six decades, R. Roger Remington wants people to know, “I’m not going anywhere.”

The Vignelli Distinguished Professor of Design and longest-serving faculty member at RIT will retire in May after 57 years at the university.

In addition to building a nationally recognized graphic design program in RIT’s College of Art and Design, the 83-year-old Remington has transformed the university into an international archival resource for design, earning many of the industry’s most distinguished accolades along the way. 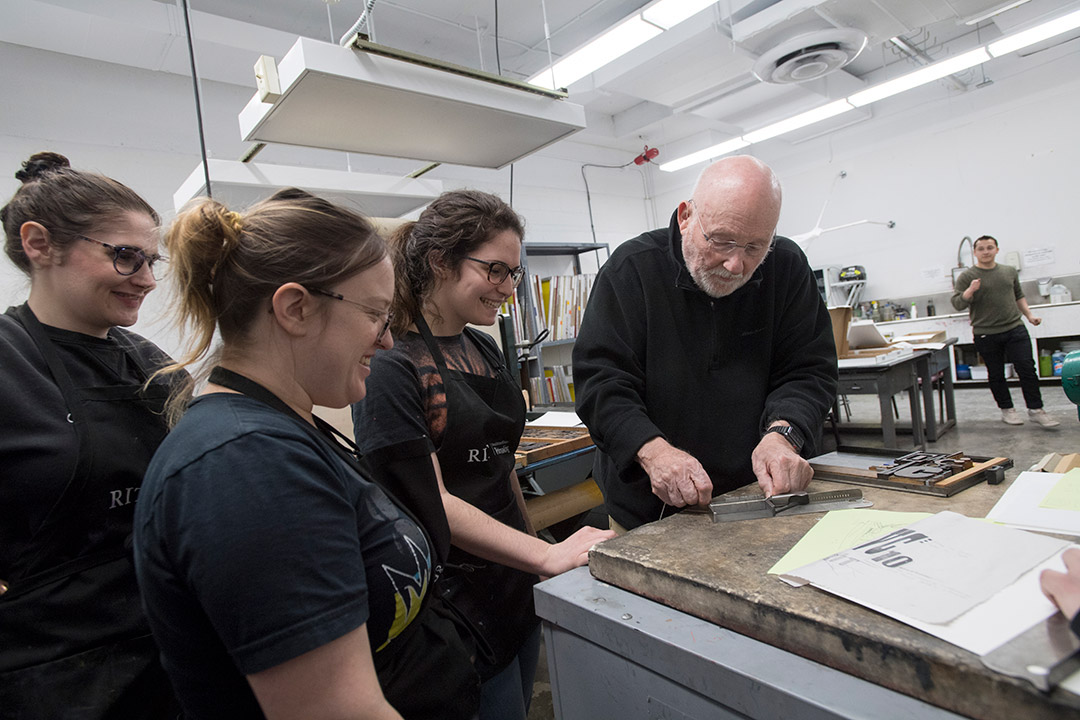 He leaves an indelible mark on the university—and the design industry at large.

“Roger has been the face of design at RIT for nearly six decades, raising the profile of the college and the university in the design world to new heights,” said Ellen Granberg, RIT provost and senior vice president for Academic Affairs. “He leaves a wonderful legacy that will benefit the university—and the design world—for years to come.”

Todd Jokl, dean of the College of Art and Design, said Remington’s impact on RIT students has been immeasurable.

“Roger Remington has been a titan in the field of design both at RIT—through his efforts that established design as a pillar at our university—and in the broader world of design, where he is known as a world-class historian, scholar, and designer, at large,” he said. “The impact Roger has had on the College of Art and Design as well as the field of design, overall, cannot be overstated.”

From student to chair

Remington, who grew up in Glens Falls, N.Y., was first introduced to RIT in the 1950s when he was an art and design student.

The head of the School of Art and Design at the time, Stanley Witmeyer, began transitioning the program from a traditional Beaux Arts academy to a modern design program. As a result, Remington recalled, he graduated from RIT in 1958 with a strong foundation in both styles. 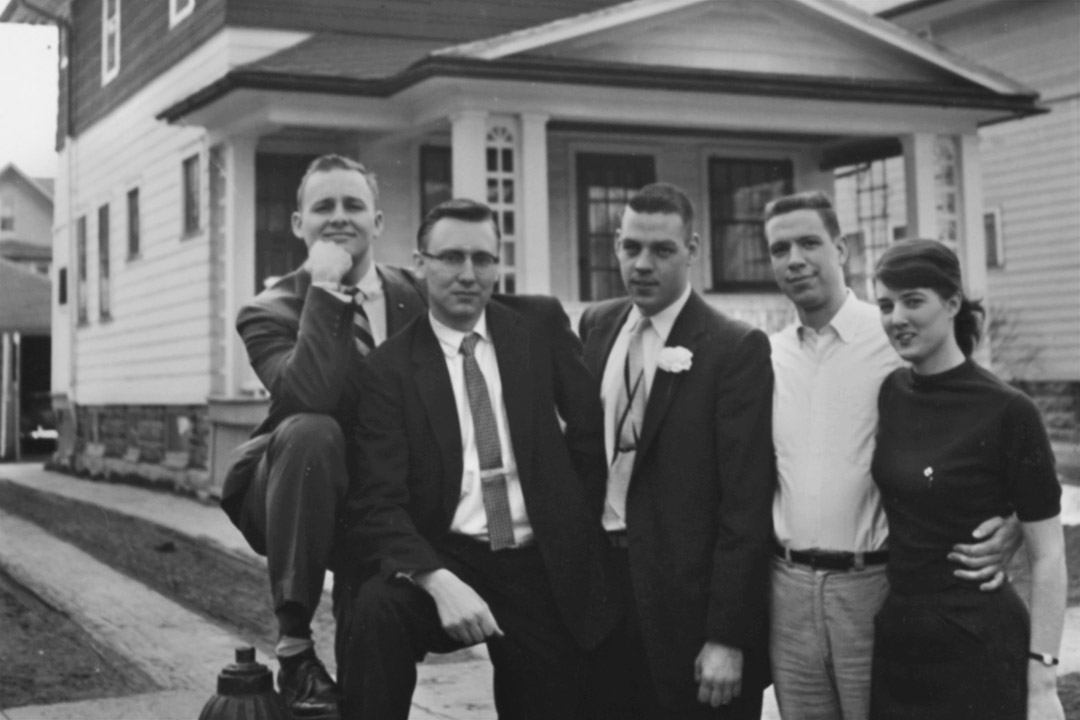 After graduating, he returned to New York state and worked in packaging design for three years before the call to teaching grew stronger. Montana State University in Bozeman needed a design teacher and Remington took the job, “sight unseen,” he recalled, becoming the only graphic designer in the school’s small art department until 1963.

“Then I got a call from Stan Witmeyer,” Remington said. “He said, ‘Would you like to come back to RIT to teach? We are building a new campus, and we would like to have you be part of our faculty.’”

Remington said those early years at RIT were “both challenging and exciting at the same time.” The transition from an intimate downtown setting to the sprawling Henrietta campus was stressful, yet exhilarating.

He had the opportunity to work on the branding program for the new school, which was used by RIT for two decades. He helped build the first graphic design department, which he chaired for seven years, while he began to make a significant impact on students in the classroom.

Remington considers himself primarily a teacher who has critical interests in design studies and graphic design practice. He received the Eisenhart Annual Award for Outstanding Teaching—RIT’s highest recognition of teaching excellence—in 1978.

Remington is renowned worldwide for his critical interests in design studies, research, writing, and graphic design practice. Since 1982, he has been engaged in the research, interpretation, and preservation of the history of graphic design. 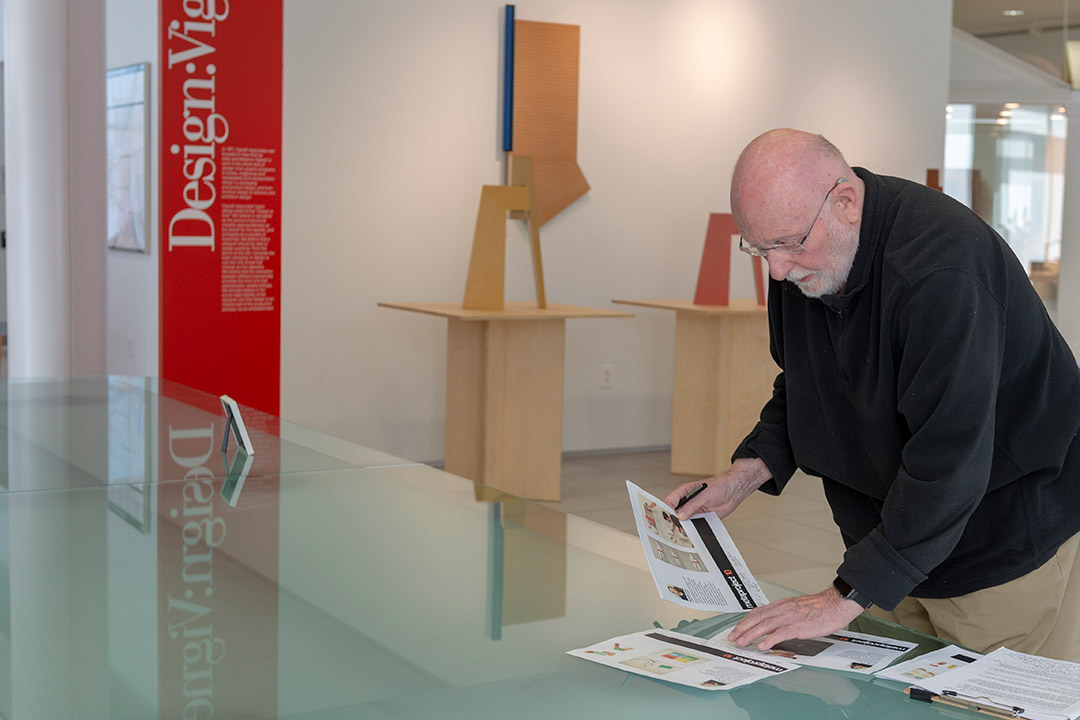 Remington has been called the soul of the Vignelli Center for Design Studies, which is celebrating its 10th anniversary this year.

The crown jewel of his archival efforts, the Vignelli Center for Design Studies, houses the archive of the late renowned designers Massimo and Lella Vignelli, whose graphic and product designs are icons of international design.

When Massimo Vignelli, whose friendship with Remington began in 1979, decided it was time to downsize his New York City business around 2005, there was only one place in the world where he wanted his archive housed. The problem was that the collection was too large to fit with the others at The Wallace Center.

Following five years of planning and substantial institutional support, the Vignelli Center for Design Studies opened on campus in 2010 in a building designed by Vignelli himself. Inside, students have access to original source materials and examples of the late couple’s finished work, which includes corporate identity campaigns for Xerox, American Airlines, and Bloomingdale’s; street signage; jewelry; glassware; and furniture. The Vignelli Center is currently marking its 10th anniversary.

At the time of the center’s dedication, Vignelli said the project would never have been built without Remington, whom the late designer called the center’s soul who made the archive a teaching instrument and a formidable legacy to RIT.

“Roger was the driving force at bringing the Vignelli archive to RIT, establishing and growing the world-class collection now housed in the Vignelli Center, and in realizing the remarkable building that now houses this astounding archive,” Jokl said. “Due in large part to Roger’s tireless work, the Vignelli Center for Design Studies now serves as an invaluable resource to our students, our faculty, and design scholars around the globe.”

Josh Owen, director of the industrial design program, said the Vignelli Center is a landmark gift to the world. Owen said the center’s archive is a uniquely valuable tool for RIT students.

“The center is like an eternal flame for design education—Roger has provided the fuel,” Owen said.

Remington said his ambition since opening the center was to make it even more valuable. He achieved that by expanding educational programming, including workshops and lecture series presented by modern-day design leaders.

“It has been my major goal to help students achieve the highest possible level of visual aesthetics in their work,” Remington said. “Developing the Cary Graphic Design Archive and the Vignelli Center for Design Studies has been a major contribution to students, to RIT, and to the profession.”

Remington has won many of the design industry’s most prestigious awards. He received the Ladislav Sutnar Prize from the University of West Bohemia in Pilsen, Czech Republic, in 2015. The Ladislav Sutnar faculty of Design and Art has awarded the prize to honor outstanding international designers, educators, artists, and institutions for their contributions to design and art.

In 2012, he was asked to join Alliance Graphique Internationale (AGI), an elite society of graphic design professionals worldwide. Widely considered the Academy Awards of the design industry, AGI only admits members who have achieved high professional standing in the field of graphic design in their native country or internationally. Nominated by Massimo Vignelli, his official induction in London came after he celebrated 50 years at RIT.

The impressive list of inductees into the New York Art Directors Club Hall of Fame throughout nearly 50 years includes such luminaries as Walt Disney, Andy Warhol, Ray Eames, and Paul Rand. Remington became a laureate for the Hall of Fame in 2008.

“I’m still going to be in Rochester… and I’d like to continue in an active role, but work on my own unique projects,” he said. “I’m not really seeing retirement as the end of my relationship to RIT at all.”

We asked readers of RIT University Magazine to send us stories about R. Roger Remington’s impact on them. Read the remarks on the Roger Remington tribute page.