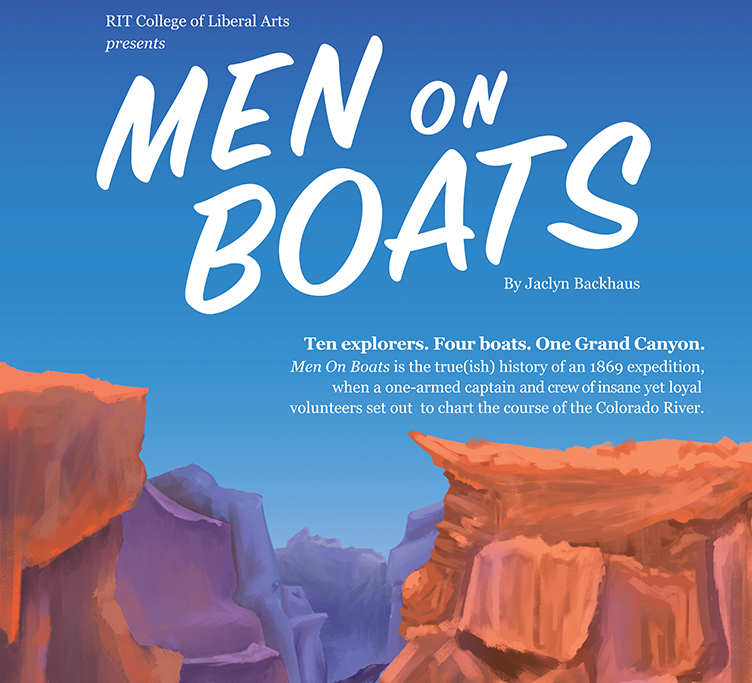 Men On Boats
by Jaclyn Backhaus
directed by Alexa Scott-Flaherty

Ten explorers. Four boats. One Grand Canyon. Men On Boats is the true(ish) history of an 1869 expedition, when a one-armed captain and crew of insane yet loyal volunteers set out to chart the course of the Colorado River. In this very modern take on a very old American adventure story, audiences and performers alike get a chance to question American history and who gets to tell the story of our shared past. Be prepared for a rollicking and rousing adventure story looking at a historical moment through a different lens.

Casting note for Men On Boats: ​
The 10 cisgender, white, male characters in both Men On Boats and the true, original 1869 expedition are being portrayed by a cast made up of racially diverse actors who are female-identifying, trans-identifying, genderfluid, and/or non-gender conforming, as intended by the playwright. The two Native characters in the play--the Ute chief, Tsauwiat, and Tsauwiat’s wife, The Bishop--are being portrayed by BIPOC-identifying actors, also as intended by the playwright. It is the strong belief of the playwright and of everyone on our team that those specific characters are played by BIPOC actors, and they are. We are committed to creating a safe and inclusive space.

We are excited to welcome you back to RIT for live performances! The safety and well-being of our students, faculty, staff, and patrons is our top priority. We appreciate your willingness to join us in keeping our community safe from COVID-19.

Our top goal is to provide you with a safe theatre-going experience. Based on current federal health and safety recommendations, and following the practices of other local and state-wide theaters, RIT & NTID Performing Arts are now requiring all patrons to show proof of full vaccination upon entry to performances. No exceptions allowed. Regardless of vaccination status, all patrons must also wear a mask while inside any RIT/NTID facility.

Currently, Webb Auditorium will be seating audiences at a reduced capacity of 50%. Upon entering the theatre space, audience members will be able to easily identify which seats are available and which are not. This physical distancing will create an additional layer of COVID-19 protection. Webb Auditorium will be cleaned and disinfected after each performance.

If you are unable to be vaccinated or wear a mask, we ask that you do not plan on attending the live performances of Men On Boats, March 25-27.

Tickets on sale Monday, February 14 at 10am from RITTickets.com, by visiting the Gene Polisseni Center Box Office from 10am-6pm Monday-Friday, or by calling 585-475-4121.