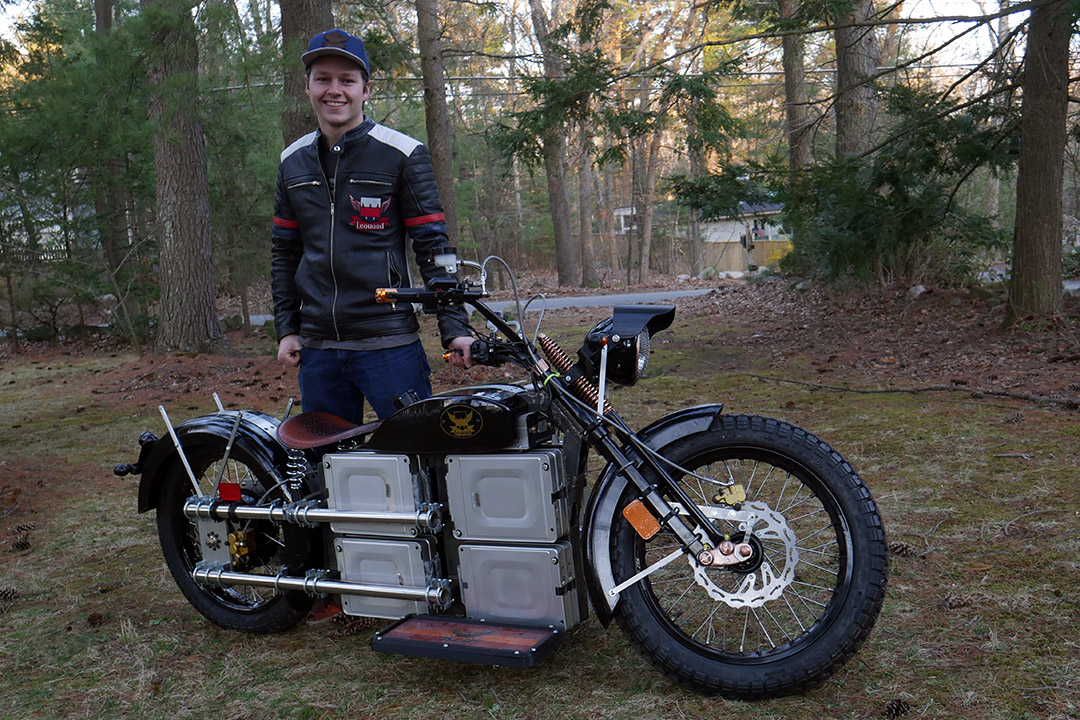 Hunter Leonard, of Wayland, Mass., used his quarantine to make progress on his startup business, building electric classic motorcycles from the ground up.

As students at Rochester Institute of Technology have successfully transitioned to temporary online learning as a result of the COVID-19 pandemic, they’ve also found ways of connecting with their peers to continue their interests with clubs, organizations and performing arts.

There are more than 300 official student clubs and organizations at RIT, and in many cases, their members have been holding online meetings, doing performances, playing games and planning ahead for the fall semester.

Prior to the crisis, members of the Electronic Gaming Society met each Wednesday night in the Davis Room to play games on their laptops or console computers. Since social distancing came in place, they’ve resumed their Wednesday night meetings online, playing games like Jackbox and Animal Crossing. And they recently began a project to reconstruct the RIT campus using Minecraft. Word spreads about their meetings from an emailed newsletter and a community engagement discussion group on Discord.

“A lot of the clubs on campus are getting very creative with the crisis they’ve been put in and adapting really well to delivering something to their members,” said EGS President Evan Misiorski, a fourth-year School of Individualized Study major from Southington, Conn.

He said fewer people have been able to connect online due, in part, to the variety of time zones members are in now. But the interest to continue remains.

“That sense of community keeps going, especially for people who are looking to turn to a community they are familiar with,” Misiorski said. “It’s helpful to see a familiar face or voice in a chat when you aren’t able to interact with them in person.”

Members of the Latin Rhythm Dance Club hold virtual meetings and instructional videos for their members. Other clubs are contemplating virtual performances.

“We were all feeling the isolation, being apart from everyone, so that first meeting was nice because we hadn’t been able to do any of this,” said Taylor Ward, secretary of the RIT Jam Club and a third-year new media interactive development major from Victor, N.Y.

“That’s the one thing most of us miss about being on campus,” she said. “The thing that gets most people motivated to do their work is doing fun things on the side. Music is an important part of our lives, and continuing and sharing it with our friends is very important.”

Skyler Herman, a first-year software engineering major from Montville, N.J., has been connecting with other members of RIT Players through weekly meetings on Facebook.

“We’ve been able to maintain some sense of normalcy by continuing to host our weekly general meetings, online of course,” he said. “We are able to successfully emulate discussion over our 2020-2021 season through Discord.”

Club members are talking about changes to their constitution and are now picking a production team for next year’s shows – The Tempest for the fall semester and Dogfight next spring. They also plan to reschedule this spring’s play, Little Shop of Horrors, for the fall. The club’s live streams average more than 100 views, which likely includes most of their 67 active members, some from as far away as California.

“It keeps a sense of community, even though we’re socially distanced,” Herman said. “It’s really important, and the fact that we’re able to still meet is really nice.”

Some students are still able to connect by visiting campus. Emma Eagen, a second-year international and global studies major from Aurora, Colo., is president of RIT’s Beekeeper Club. She’s staying in Rochester through the summer and is one of a couple of the 20 members who regularly visits the five hives kept near RIT’s tennis courts. 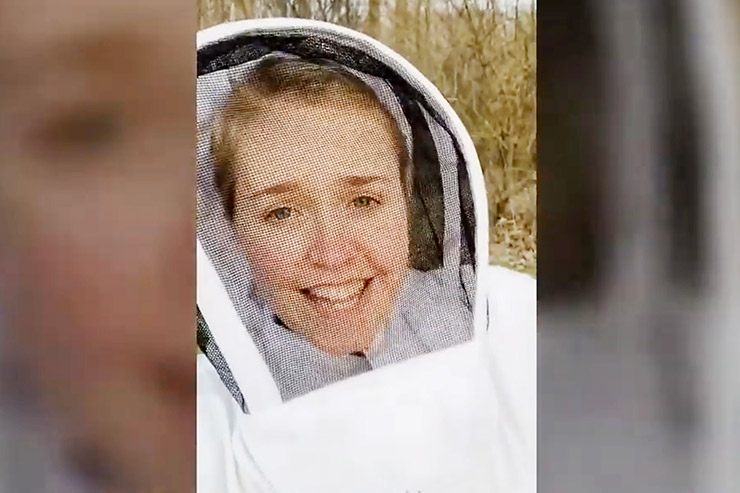 Emma Eagen, president of the RIT Beekeepers Club, continues to meet online with other club members and checks on the bee hives kept on the RIT campus.

“Whenever I do a hive inspection, I do an update for the club on social media, take pictures, talk about the general health and population of the hives and how much honey they have,” she said. “We have general discussions and stay connected. Beekeeping is what we’re all learning about and doing together. It’s a pretty big deal that we stay connected. I wouldn’t be able to do it alone.”

Recently, she helped make a video with RIT’s Center for Leadership & Civic Engagement to talk about how to make wrap from beeswax.

Like other members of the club, she’s passionate about the health of the bees. It was a passion she developed in her first year at RIT last year.

“I was looking through the club list and thought I would find the one I knew the least about and join,” Eagen said. “A couple of years later, I can talk about bees for hours.”

Engineering students have kept busy building things at home, including a gym made of ropes and pulleys, a classic electric motorcycle and a beer pong table that returns balls to the thrower.

Adesola Adedewe, a third-year electrical engineering major from Nigeria, founded Tigers Helping Tigers last fall as the Kate Gleason College of Engineering senator for Student Government as a way for engineering students to have additional educational and social opportunities outside their classwork.

“The workload is very intense and engineering students sometimes don’t have a lot of spare time to join in fun activities because they have a lot on their plates,” he said. Prior to March, the group hosted game nights and a workshop series involving students, faculty and panelists about how to achieve their dream co-op.

“We had lot of other events planned for this semester that we had to cancel,” Adedewe said. “So we were thinking of ways we can still bring the engineering students together.”

A “stay at home building challenge” was born, and members submitted a photo or video of something they made using materials in their home environments, or of a project they now finished which they started before spring break.

“We were very impressed by the submissions,” he said. “Some people put a lot of thought into it.” The submissions are posted the club’s Instagram account where members voted for their favorites.

Students have also been connecting in religious and spirituality groups. A local chapter of Glory House International held worship experiences and dorm Bible studies for students on the RIT campus earlier this year. “Then COVID-19 hit us all,” said College Pastor Ken Sayres.

Di’Monique George, associate director of the Center for Campus Life, said she’s not surprised students are continuing to connect with the friends they’ve made through their clubs and organizations.

“Although students may be going through a stressful time away from campus, the fact that they remain involved with their clubs at RIT shows that social distancing doesn’t automatically mean emotional distancing goes with it,” she said. “We’re happy RIT students have such a wide variety of clubs and organizations that allow them to continue socializing with their peers and pursuing their passions from home.”­