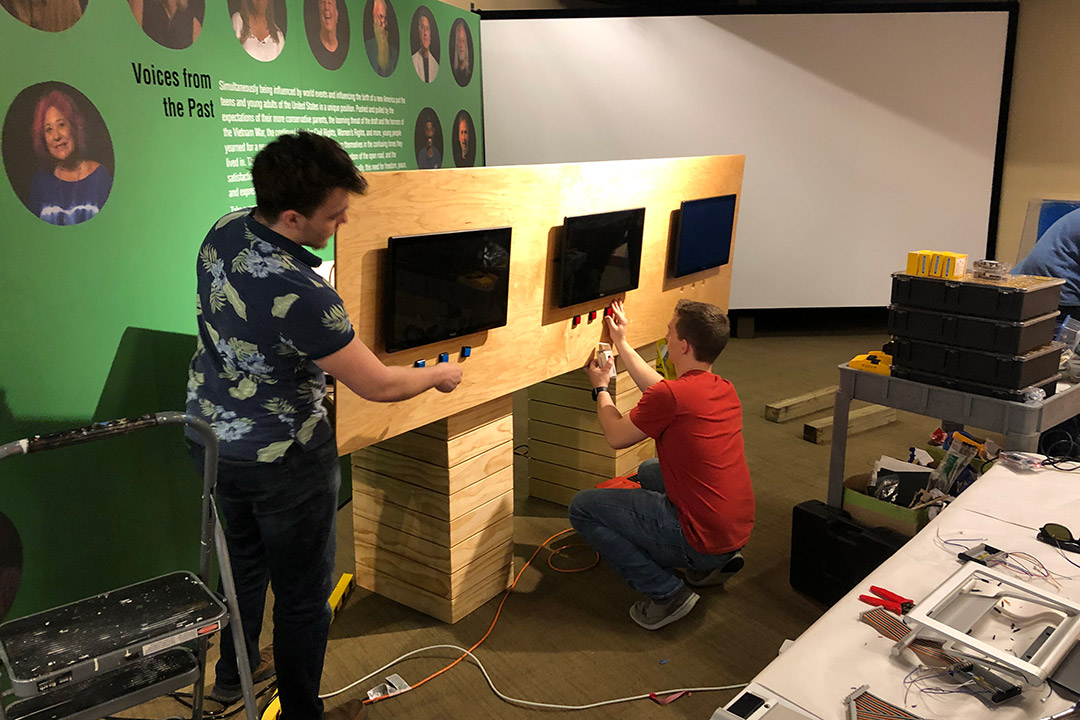 RIT is helping visitors to the Museum at Bethel Woods in Bethel, N.Y., mark the golden anniversary of 1969’s legendary Woodstock festival with a series of videos on custom wood kiosks that portray the hopes, fears and expectations of today’s youth and the Woodstock generation.

Rochester Institute of Technology is helping visitors to a museum marking the golden anniversary of arguably the greatest music festival of all time with a series of videos that portray the hopes, fears and expectations of today’s youth and the Woodstock generation.

Six recently graduated motion picture science (MPS) students from RIT’s College of Art and Design wove together the captivating videos for a museum exhibit at the Bethel Woods Center for the Arts, the nonprofit cultural center located at the National Register Historic Site of the Woodstock festival in Bethel, N.Y., about 90 miles northwest of New York City.

MAGIC Spell Studios Director David Long and Associate Professor Ricky Figueroa in RIT’s School of Film and Animation guided the team of MPS students in the creation of custom video kiosks for the multimedia exhibit, “We Are Golden: Reflections on the 50th Anniversary of the Woodstock Festival and Aspirations for a Peaceful Future.” The exhibit runs through December.

“A team from RIT’s MAGIC Center is further designing a social media experience to help all visitors to the special 50th anniversary exhibit to connect and share their reflections on this seminal event in American culture,” Long said.

The MAGIC director credited RIT Board of Trustees member Andrew R. Jacobson, who grew up next to Yasgur farm in Bethel, N.Y, with introducing the RIT team to Wade Lawrence, director and curator of the Museum at Bethel Woods. The museum will commemorate 1969’s legendary festival with a series of concerts and other activities the weekend of Aug. 16-18.

Once it began working on the project early this year, the RIT team had a few short months to pull together the compelling video content from massive amounts of historical footage. It also necessitated project members traveling to and from Bethel—a four-hour trip—multiple times.

“We were given about 100 transcripts to read through which we pulled quotes from to organize the stories and we edited the videos from there,” said Grace Annese, a 2019 MPS graduate.

Annese said the experience was especially rewarding—and challenging—given that MPS students weren’t accustomed to working with the tools and materials necessary to create the custom wooden kiosks. She credited Long’s woodworking experience with the successful construction of the kiosks.

“We also had to program the kiosk buttons to play each of the videos,” Annese added. “Making sure that they will work for months without malfunctioning was definitely one of our key challenges.”

The RIT team was invited to a private opening of the exhibit “and it was very cool to see people watching our videos and enjoying using the kiosks,” Annese noted.

“Nowadays our work is uploaded to YouTube or Facebook and you only get to see comments,” she said. “It was very rewarding to actually witness people enjoying our work.”

The Museum at Bethel Woods, Bethel Woods Center for the Arts is located at 200 Hurd Road, Bethel, N.Y. in Sullivan County. For information, go to www.bethelwoodscenter.org or call 866-781-2922 for museum admission, hours and more.