He is the author or co-author of four books: the New York Times bestseller Nobody: Casualties of America’s War on The Vulnerable from Ferguson to Flint and Beyond; the award-winning Beats, Rhymes, and Classroom Life: Hip-Hop Pedagogy and the Politics of Identity; The Classroom and the Cell: Conversations on Black life in America; and Gentrifier.

Hill is the Steve Charles Professor of Media, Cities, and Solutions at Temple University in Philadelphia. The endowed position was created to train students in journalism and media that can positively impact communities by focusing on potential solutions rather than solely on problems. Prior to that, Hill held positions at Columbia University and Morehouse College.

Danielle Ponder and the Tomorrow People 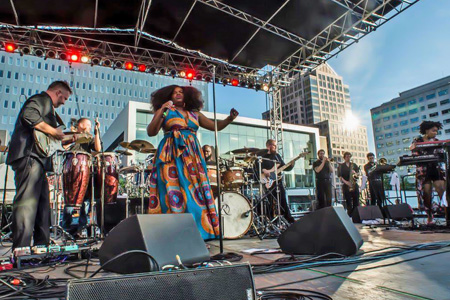 Danielle Ponder and the Tomorrow People have toured internationally, opened shows for artists including the Roots and George Clinton, and cite influences from artists varying from Lauryn Hill to Nina Simone. Their debut EP, Blow Out the Sun, was released in 2016 and touches on themes of love, personal liberation, and political and social issues. When not performing with the band, Ponder works as a criminal defense attorney.

Using the power of words, page, and stage to publicly to affect social and political change and create new ways of thinking, Reenah Golden teaches, presents, performs, and guest-lectures regularly at schools, organizations, colleges, universities, and cultural institutions around the country. She has also been invited to perform her poetry nationally and internationally. She is the co-founder of Kuumba Consultants, an arts-in-education agency dedicated to matching teaching artists of color with youth agencies and schools seeking quality arts and cultural programming. Golden is a native of Rochester, NY and graduate of Rochester Institute of Technology.

For information and to register, visit rit.edu/diversity/expressions.