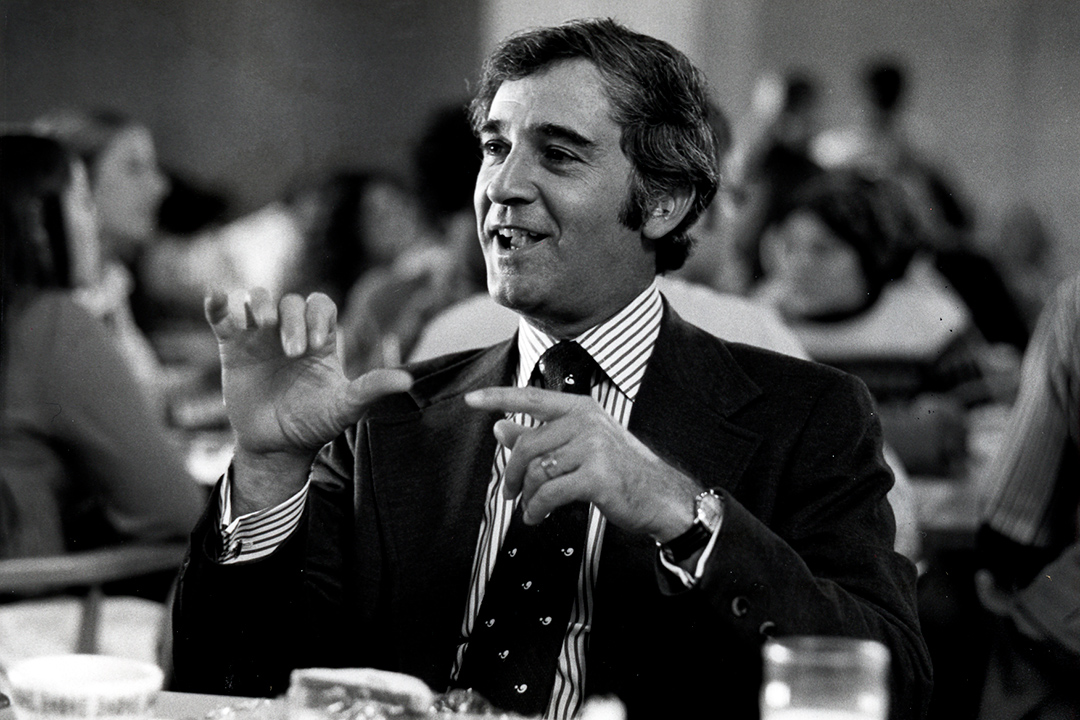 D. Robert Frisina, pictured here in the 1970s, enjoyed interacting with students at RIT/NTID, where he served as founding director.

The founding director of RIT’s National Technical Institute for the Deaf, D. Robert Frisina, died in Florida on Monday, March 29. He was 96.

An international author and lecturer, Frisina was a visionary and a pioneer in the field of deaf education. He was selected by the RIT Board of Trustees as the first director of NTID in January 1967, and he went on to quite literally build NTID from the ground up. Arthur L. Stern, who chaired RIT’s Board of Trustees from 1961 to 1976, said of Frisina, “Few leaders anywhere in the nation could have matched his dynamic leadership in charting the course for the National Technical Institute for the Deaf.”

At the time he was appointed NTID director, less than 1 percent of all college-age deaf individuals were enrolled in postsecondary education. Of those employed, most held unskilled or semi-skilled positions, and there were virtually no deaf people in technical or managerial positions. Frisina’s goal from the start was to improve education opportunities for deaf and hard-of-hearing students to open to them successful career paths on par with those of their hearing peers. 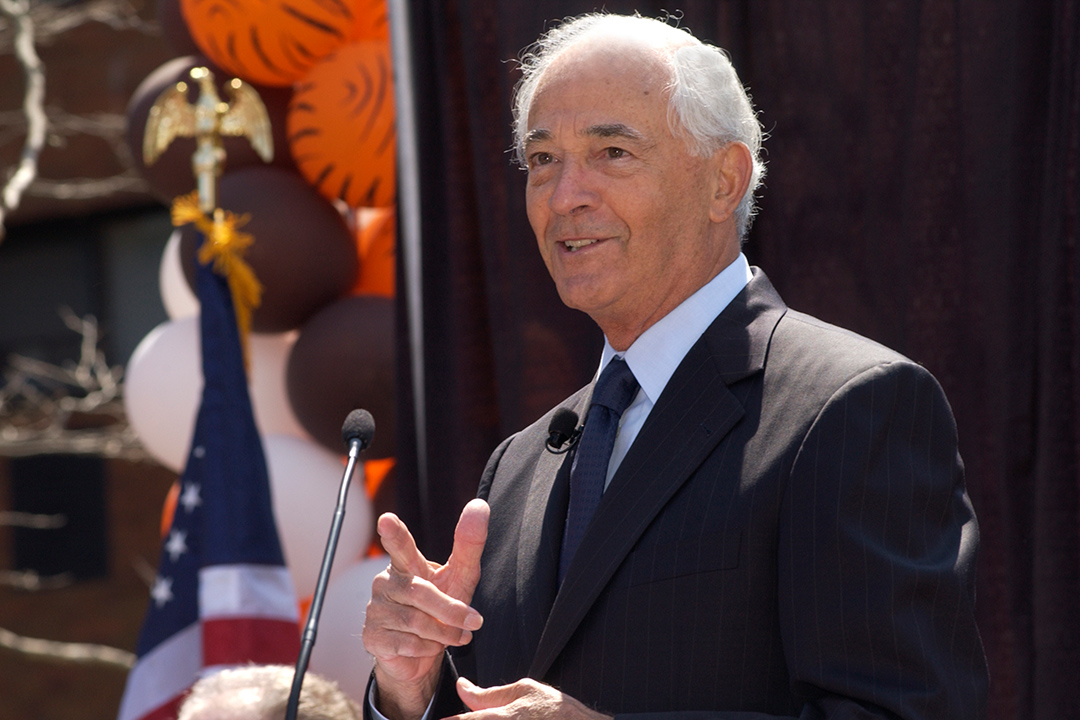 In 2007, RIT/NTID dedicated the D. Robert Frisina Quadrangle in his honor.

He brought with him to RIT/NTID a background in education and deafness as well as an acute understanding of the need for RIT to fulfill its contract with the federal government for operating NTID. When he saw a challenge, he doggedly pursued a solution. He scrupulously selected faculty and staff who were experts in a variety of technical and educational fields and who understood they were embarking on what he called “The Grand Experiment,” an entirely new venture to educate a large number of deaf and hard-of-hearing students at the postsecondary level on a mainstream college campus.

Well known for encouraging faculty and staff to develop innovative ideas, Frisina was known to say that he had two pockets—one for problems and one for solutions. He often would tell people that if they brought him a problem for one pocket, he also expected them to bring a solution for his other pocket.

“Bob was instrumental in developing, encouraging, and mentoring many of NTID’s best leaders over the years,” said Gerry Buckley, current NTID president and RIT vice president and dean. “His foresight, wisdom, and perseverance helped make NTID what it is today.” 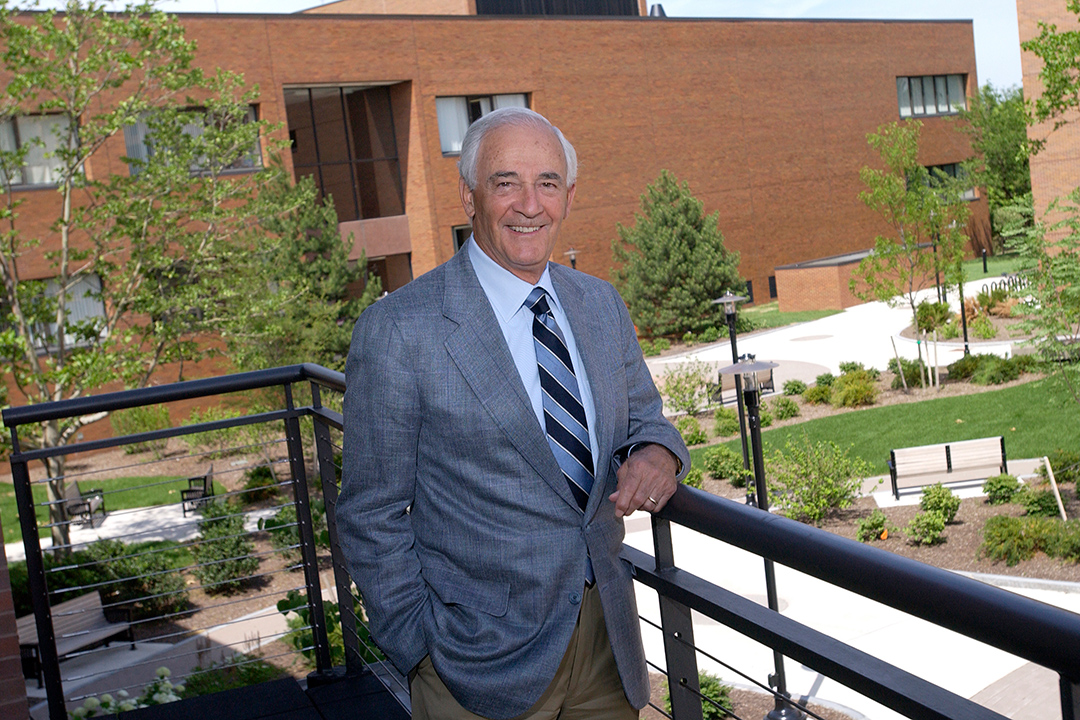 D. Robert Frisina stands on the balcony overlooking the area now known as Frisina Quad, dedicated in his honor in 2007.

Stepping down as leader of NTID in 1976, Frisina continued to serve as an RIT senior vice president for 15 years. In 1993, he formed the International Center for Hearing and Speech Research (ICHSR), which was housed at RIT/NTID, and served as director of ICHSR for 17 years. He also served as a board member and adviser for a number of organizations and earned many RIT awards, including the Presidential Medallion, the Principal Investigator Award, and the RIT Diversity Trailblazer Award. In 2007, RIT/NTID dedicated the D. Robert Frisina Quadrangle in his honor. In 2009, he was named vice president emeritus of RIT.

He held a bachelor’s degree in biology from Westminster College in Fulton, Mo.; a master’s degree in education of the deaf from Gallaudet College; and a Ph.D. in audiology and psychology from Northwestern University.

“He always spoke with tremendous pride about the mission of NTID and the positive impact it has had on the lives of thousands of deaf individuals,” Buckley said. “He said that one of the highlights of his career was receiving a standing ovation from the thousands of alumni who attended NTID’s 50th anniversary celebration in Rochester in 2018.” 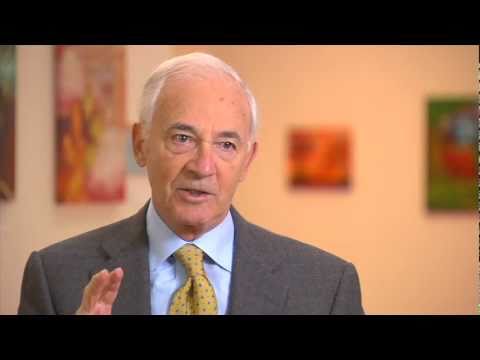