Invisible captioning is the Next Big Idea 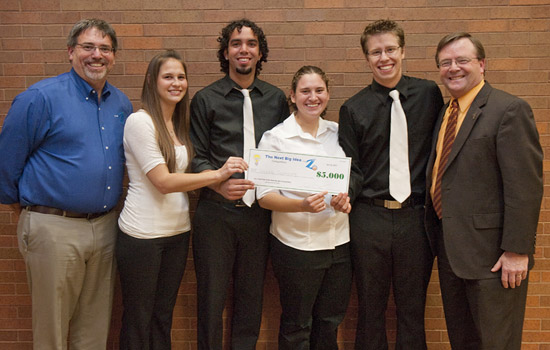 Four teams of students from Rochester Institute of Technology’s National Technical Institute for the Deaf wrapped up months of conception, research, design, engineering and marketing when they showed off their inventions, new technology and business concepts hoping to come up with the Next Big Idea and win a share of $10,000 in prize money.

The competition, sponsored by ZVRS video relay service, encouraged students to create a product, technology or business that would benefit the deaf and hard-of-hearing community. The teams needed to be made up of three to five members, with at least three different majors represented. It was the second year ZVRS has sponsored this competition.

“I am floored,” said Chris Wagner, an RIT/NTID alumnus and vice president of marketing for ZVRS, after seeing the presentations. “Last year I was so impressed. But this year I’m even more impressed. Wherever I go, I brag about how amazing RIT is.”

Each team had 10 minutes to pitch its idea to the panel of judges: five ZVRS employees who happen to be among the 60 RIT/NTID alumni working for the Florida-based company.

First place and $5,000 was awarded to invisibleCAPTIONS, represented by students Samantha Braidi of Vineland, N.J.; Cory Behm of Rochester; Daniel Moreno of Miami, Fla.; and Melissa Kielbus of Fremont, Calif.

Their plan is to make glasses with lenses and a custom filter that would capture ultraviolet light. A movie projector would send out the UV light, but only those with the glasses would see the captions. The glasses would be a cheaper and more efficient alternative to options currently used in movie theaters, including large, unflattering, battery-operated heavy glasses that constantly need adjustment, they said.

“This could be revolutionary,” Behm told the judges. “It’s a whole new way deaf and hard-of-hearing people can access information.”

Second place and $3,000 was awarded to Team Champ: Amie Sankoh of Dallas, Ga.; Robb Dooling of Omaha, Neb.; and Michael Stewart of New Brunswick, Canada. Their product, Volta Tracker, will help locate lost hearing aids or cochlear implants. A small flashing device would be mounted on the item and using a GPS and an application on a smartphone, the device would start to flash or vibrate, making it easier to locate.

Third place and $2,000 was awarded to MotionSavvy, and students Wade Kellard of Cincinnati, Ohio; Ryan Hait-Campbell of Seattle, Wash.; and Jordan Stemper of Waukesha, Wis. MotionSavvy is intended to enable deaf and hard-of-hearing people to use sign language to activate new technology, just as Siri can react to a voice command.

“We feel hearing people have access to new technology, we want to bring that new technology to the deaf and hard-of-hearing community,” Stemper says.

New technology called Leap Motion, available to the public in July, may be able to convert sign language to text and text to speech. The students already have samples of the product for testing and have been accepted in RIT’s E. Philip Saunders College of Business Summer Start-Up Program.

The fourth-placed team was S.A.V.E.D., with students Pierce Hamilton of Fairfield, Conn.; Christopher Fenn of Pittsburgh, Pa.; and Casey Jaeger of St. Louis, Mo. Their idea is to have a dashboard device flash when the sound of a siren was detected to help deaf and hard-of-hearing drivers know when there’s an emergency vehicle near. They hope to have the device as a standard feature on all new vehicles by 2025.

Team members said they may use their prize money to further develop their ideas.

All four projects and team members will be exhibiting during the Imagine RIT: Innovation and Creativity Festival this Saturday.

NTID President Gerry Buckley commended the contestants and their projects.

“We owe this whole experience to ZVRS,” Buckley said. “We thank them for their support. They believe in our students.”

Wagner said ZVRS will sponsor a variation of Next Big Idea again next year for RIT/NTID students.