The theatre opened its doors on October 3, 1974 with a production of Shakespeare's Taming of the Shrew. Originally called the Experimental Educational Theatre (EET) the theater department has a rich heritage of offering challenging, entertaining, and provocative works of theater, all created for both Deaf and hearing audiences. We have produced work in a wide variety of theater styles; Comedy, Musical, Dance, Drama, Classical, Kabuki (Japanese), Experimental, Puppets, and new works by both Deaf and hearing authors. 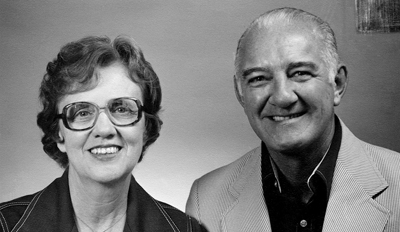 Teacher, author, actor, poet... Robert F. Panara was RIT's first deaf faculty member: founder and first chairman of NTID's Department of English; and founder and director of NTID's Experimental Educational Theatre program. Professor Panara's two decades of service to NTID at RIT and his firm belief in the talent and potential of young deaf people will always be remembered by those with whom he has shared his wisdom and vision.

Shirley Panara was a deaf librarian, sign language instructor, sports enthusiast, and grandmother who loved Jackie Chan movies. She passed away peacefully at Highland Hospital on July 16, 2003 after suffering a stroke. She was 80 and had been happily married for 56 years.

Born in St Louis, Shirley was the only deaf member of the school band at St. Elizabeth's High School, where she played the drums. She was also captain of her high school basketball team and later played semi-pro softball with the Silver City Seals.

Shirley earned a certificate from Mound City Business College, and in 1947 married Robert F. Panara, whom she met at a wedding. When he went to teach at Gallaudet College in Washington, DC, Shirley became a librarian and later a PE teacher and substitute coach. She set up the first co-ed varsity basketball team and led them to a winning season, defeating such teams as Maryland U., American U., and George Washington U. In 1960, she became the first deaf librarian at the Library of Congress.

In 1968, Shirley, husband Bob, and son John moved to Henrietta, NY when Bob founded the English department and Theatre program at NTID. Shirley was quickley hired as the librarian at the Rochester School for the Deaf, where she retired in 1974. For many years, she also taught sign language for the Monroe County Health Association.

Shirley loved all creatures great and small. She had 14 dogs in her life, giving each one TLC, and her love touched many people as well. Shirley also enjoyed pantomime, performing, and teaching; and collected Noah's Ark memorablia. She also loved spending time with her grandchildren, Bill and Erin, and the companionship of her dog, King Pup.

An avid bowler who won many awards, she founded the Eastern Deaf Women's Bowling Association and supported Deaf Women of Rochester (DWR). She could be called the "deaf Babe Didrikson of her era." Along with Bob and John, she loved to play golf and visit with the LPGA golfers when the tour came to town; many of them knew her by name.

An unforgettable moment near the end of her life happened in June. While watching a performance by Japanese Taiko drummers at NTID, Shirley joined them in an impromptu session and played along!