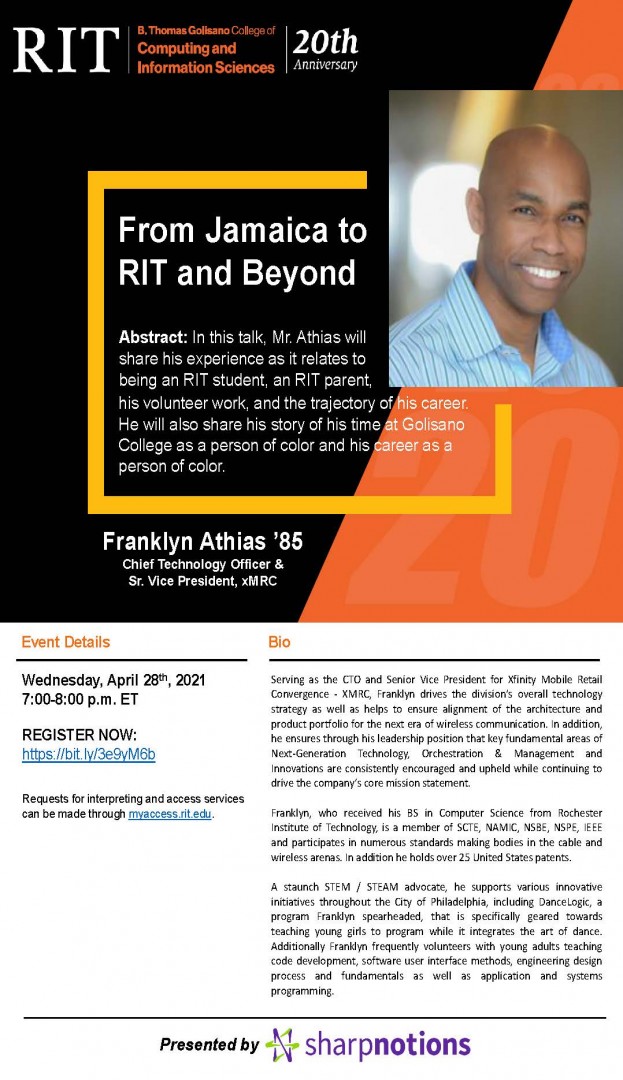 This year marks the 20th anniversary of the founding of the Golisano College of Computing & Information Sciences. To celebrate, we are planning an engaging sequence of events!

We are pleased to announce Mr. Franklyn Athias '85! Serving as the CTO and senior vice president for Xfinity Mobile Retail Convergence - XMRC, Mr. Athias drives the division’s overall technology strategy as well as helps to ensure alignment of the architecture and product portfolio for the next era of wireless communication. In addition, he ensures through his leadership position that key fundamental areas of Next-Generation Technology, Orchestration & Management, and Innovations are consistently encouraged and upheld while continuing to drive the company’s core mission statement.

Previously, Mr. Athias served as the Sr. Vice President of IP Communications and Services for Comcast Cable and was responsible for developing and deploying strategic opportunities within cable to extend services for WiFi, Internet, and Digital Voice.

Throughout his 25+ year career with Comcast, he has spearheaded several IP Architecture programs and initiatives for cable-modem broadband services. Notable accomplishments during his tenure include serving as the Lead Architect for the IMS voice strategy and deployment for residential and business services, Lead Architect for Comcast.net Internet Service, and initiating the evaluation process of the industry’s first Voice over IP service using cable modems. In addition, he has also been credited in teaming up with the Comcast Interactive Capital and Strategic Development organizations, participating in the technical evaluation of early-stage startup companies along with a host of other valuable contributions.

Mr. Athias, who received his BS in Computer Science from Rochester Institute of Technology, is a member of SCTE, NAMIC, NSBE, NSPE, IEEE and participates in numerous standards-making bodies in the cable and wireless arenas. In addition, he holds over 25 United States patents.

A staunch STEM / STEAM advocate, he supports various innovative initiatives throughout the City of Philadelphia, including DanceLogic, a program Franklyn spearheaded, that is specifically geared towards teaching young girls to program while it integrates the art of dance. Additionally, Franklyn frequently volunteers with young adults teaching code development, software user interface methods, engineering design process, and fundamentals as well as application and systems programming.

Franklyn currently resides in the Pennsylvania Tri-State area with his wife and in his free time enjoys reggae festivals, exercising, and international travel.

Register today and join us Wednesday, April 28 at 7 p.m. ET!

Special thanks to Sharp Notions for being the premier sponsor of the Golisano College 20th Anniversary Celebration Speakers Series. More events in this series to be announced!