Seabreeze Amusement Park to be photographed in popular community event 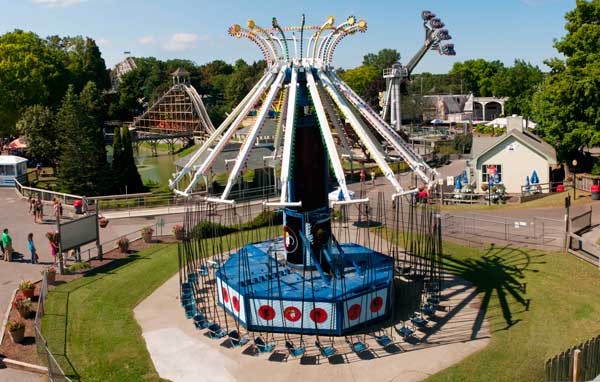 This year’s Big Shot subject will feature numerous rides located at the historic Seabreeze Amusement Park in Rochester. Photographers and light painters alike will head to Seabreeze to make this year’s nighttime photograph on May 3.

Photographing a historic Rochester landmark in grand and unique fashion is the goal of this year’s Big Shot at Rochester Institute of Technology.

As part of RIT’s 27th annual Big Shot, photographers and light painters alike will head to Seabreeze Amusement Park to make the nighttime photograph on May 3.

“We’re really excited to be able to photograph part of Rochester’s rich history,” says RIT faculty member Michael Peres, who co-organizes the event. “This year we are going to stage a huge production because of the venue and we’re always thrilled to have the greater Rochester community involved.”

The community event requires hundreds of volunteers to partake in the nighttime photo-making process. Volunteers use only flashlights and camera flash units to light up the subject. Experts refer to the process as painting with light. RIT photographers take long exposures while volunteers from the community “paint” the subject with light.

Faculty members Michael Peres, Bill DuBois and William Osterman from RIT’s School of Photographic Arts and Sciences and Dawn Tower DuBois from RIT’s National Technical Institute for the Deaf are the main organizers. RIT’s Big Shot photography project began in 1987 and has drawn thousands of volunteers and spectators over the years. Since its inception, past Big Shot photos have captured national and international landmarks including the Intrepid Air Sea and Space Museum, the Royal Palace in Stockholm, Sweden and George Eastman House International Museum of Photography and Film. To view all past 26 Big Shot photographs, go to the RIT Big Shot website.