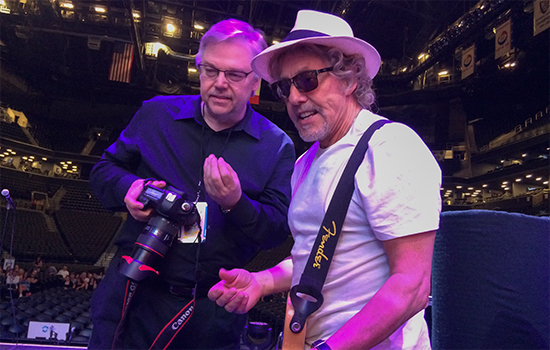 William Snyder ’81 and The Who’s Roger Daltrey talk about a flag reflecting in one of the stage lights during the sound check before The Who’s show at the Barclays Center in Brooklyn, N.Y., on May 26, 2015. Snyder is the photographer for the rock band.

William Snyder ’81 (photography) and Trevor Waite ’99 (electrical engineering technology) are more than just die-hard fans of The Who. They have backstage access and tour with them around the world.

Snyder, program chair of the photojournalism department at RIT and four-time Pulitzer Prize winning photographer and editor, is the photographer for The Who. Snyder’s photos run on the band’s website and before every show on the Jumbotron. His photos were also featured in the book, The Who: 50 Years: The Official History, and during Super Bowl commercials when the band played the halftime show in 2010.

Waite is the monitor technician for the rock band. He has been setting up speakers, cables and other electronics in the empty arenas before each show since 2007. During the show, he assists the engineers with overseeing the sound levels heard by the band and runs on stage if something goes wrong.

Snyder began his relationship with Pete Townshend, The Who’s guitarist, on assignment for The Dallas Morning News in 1993. At the time, Townshend was overseeing his Broadway production of Tommy. They hit it off during the interview until Snyder requested to shoot outside the theater and the rock legend refused. Thrown off by the response, he quickly suggested the Tommy stage instead and Townshend agreed to the alternative. Snyder was the only one to photograph him on that stage.

Over the next five years, they had several email conversations. They officially reconnected in 2000 during a party following a performance of Townshend’s “Lifehouse” with the London Philharmonic Orchestra.

Later that year at the beginning of The Who’s U.S. tour, Snyder met up with Townshend again and shot the band’s performance in Chicago. After the show, he went to the hotel where Townshend was staying and asked if the band needed help shooting pictures for its website. Townshend accepted his offer and invited him to fly with them to Detroit.

“I got to shoot stuff on and off stage,” said Snyder. “It was one of those things that you read about and hear about when you’re a kid.”

Snyder became a freelance photographer for the band and shot 10 performances in the U.S. and two in London. He also did video behind the scenes, which was a new experience for him.

On one of Snyder’s nights off when he was in the crowd with his family at a Dallas show, Townshend thanked him for helping with the band’s website. He also mentioned his preference to be called William instead of Bill.

“It was one of those things as a fan you just think, ‘Oh my god’,” Snyder said. “It was in front of 16,000 or 18,000 people and there were a lot of people there that I knew because I got a lot of feedback afterwards. Everybody started calling me William.”

After the tour, he did shows on and off for the next several years. Then in 2006, he got an email from Townshend asking him to come on the road with them again. This time he officially became an employee for seven weeks and captured the band’s performances from Southern California to Chicago. He traveled on the plane, shared meals and stayed exclusively with band members.

Waite joined the crew a year later. His part-time jobs with the RIT Tech Crew and Water Street Music Hall in Rochester inspired him to pursue a career in sound.

Waite decided to major in electrical engineering technology at RIT after serving four years in the U.S. Navy working on portable radios used on the flight deck.

After graduation, he moved to Florida and got a job as a fire alarm installer, which barely paid his student loans. As a result, he came back to Rochester and started working for eni, a company that makes transformers, and went back to Water Street Music Hall.

“My last day at eni was because the previous weekend I was running monitors for Ted Nugent,” Waite said. “I decided at that point I wasn’t interested in going back to a desk job.”

He eventually landed a job with Eighth Day Sound in Cleveland where he toured with other bands including Prince, Duran Duran and Earth, Wind and Fire. The company got The Who account in 2007 and the monitor engineer who knew Waite from Duran Duran requested him.

Touring with a band is a demanding job, he said. When it comes to adjusting sound, each member of The Who has his own subtle cues.

“We are watching all the members of the band,” Waite said. “If we miss even the slightest movement, you don’t know if they need something turned up or down. Sometimes the gestures are so small and so quick that if we’re not staring pretty much without blinking at the stage we might miss it.”

Snyder also has to pay close attention. Capturing band members at the perfect moment on stage requires hiding in small spaces and a lot of crawling. Snyder can’t get in the way of the band or be a distraction to the crowd so he has to crouch behind equipment and pop his head out for a quick shot. When he crawls around he has to be extra cautious to avoid knocking something over or unplugging anything. One wrong move would be a costly mistake and a huge embarrassment in front of thousands of people.

Now with advancements in technology, remaining invisible to the crowd has become significantly harder on the current tour.

“There is just a lot of equipment where there didn’t used to be and where there used to be equipment that I could hide behind doesn’t exist anymore,” Snyder said. “I’m using a lot more remote cameras and you can use about one or two shots per show because of the perspective.”

While many aspects of the tour have gone through changes, the dedication of the crew remains untouched.

“Working for The Who is like being a part of a family,” Snyder said. “They take care of each other. They are like brothers and sisters that all work incredibly hard. Pete once told me we demand perfection from our people but we pay well. Most people in this crew have been with the band since I started.”

Waite loves touring with The Who because the band acknowledges all the work that the little guys do. While he tries to give the band members their space off-stage, he has held several personal conversations with them.

He remembers a time when he came back to do rehearsals after taking a three-month break. After the band played a few songs, Townshend stepped down into the monitor wing and asked what he had been doing. Waite, thinking it was work related, responded that he was watching the record computer. Townshend gave him a puzzling look and said, ‘And you have been doing that for the last three months?’

“At that point I realized he had asked me what I had been doing personally in my own life, which took me by surprise,” Waite said. “Funny enough I had just gotten married, so I lit right up and said I got married and we started having a real conversation, which I wasn’t expecting.”

He only does freelance work now to spend more time with his wife, Nicole Bukowski ’02 (applied arts and sciences), who he met at RIT Tech Crew. But he will drop everything to go out with The Who.

“It’s like a job but better,” Waite said. “Although you are seeing the same people every show day, you are seeing legends that most people would say you are lucky to be working with.” 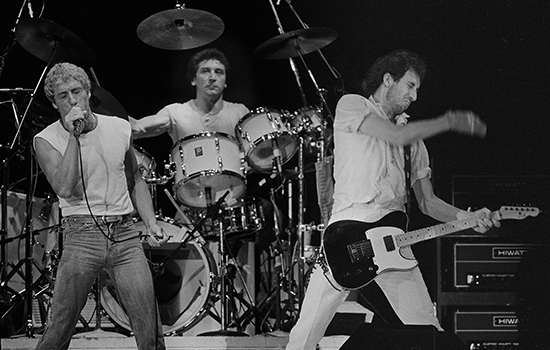 William Snyder shot this photo of The Who in 1980 while working as an intern at The Arizona Republic. He has been a fan for more than 40 years. William Snyder 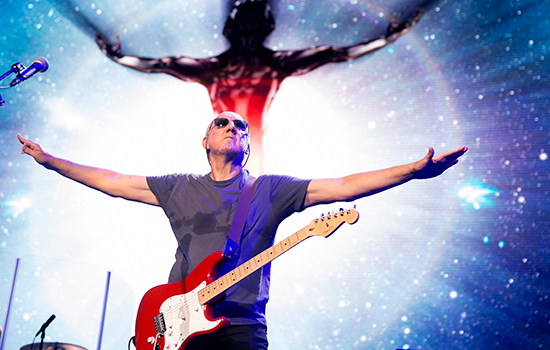 Pete Townshend performs “Sparks” at the Mohegan Sun Arena during The Who Hits 50! tour in Uncasville, Conn., on May 24, 2015. William Snyder 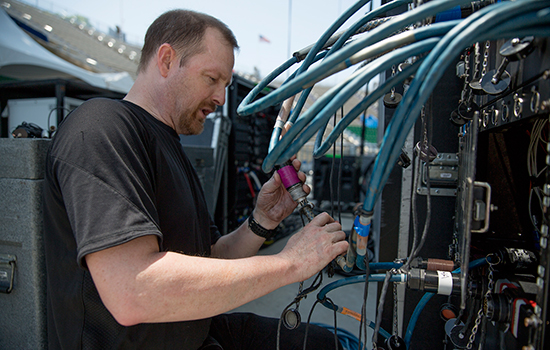 Trevor Waite ’99 checks the connections for the stage sound system before The Who Hits 50! show in Forest Hills, N.Y., on May 30, 2015. Waite is a monitor technician. William Snyder