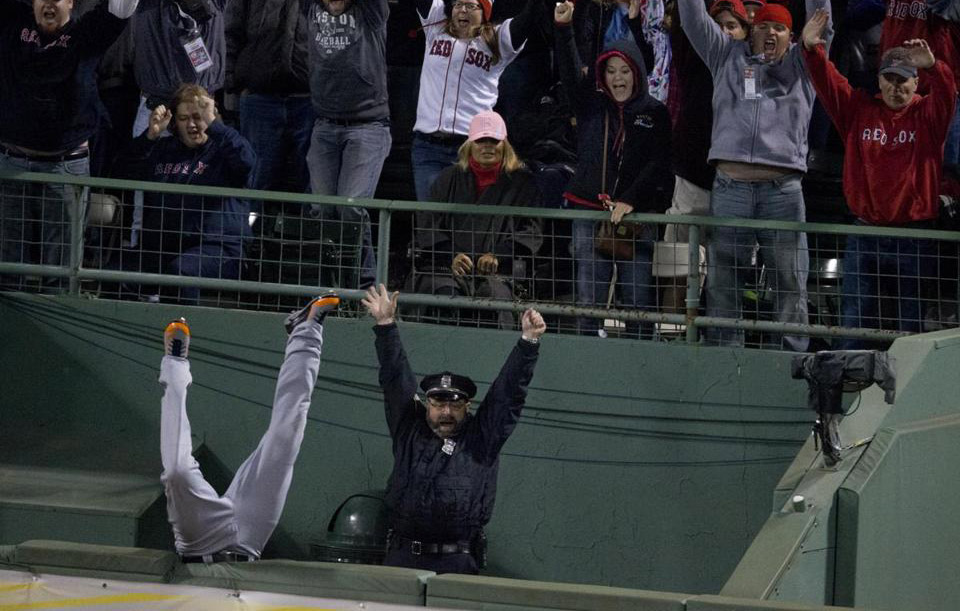 As soon as Boston Red Sox player David Ortiz swung the bat during the eighth inning of Sunday‘s baseball game, Stan Grossfeld knew it was going to be a home run. He turned his camera toward right field, which was where he thought the ball was going. He looked toward the bullpen just in time to see the ball, Detroit Tigers player Torii Hunter and a police officer all came into the frame.

Grossfeld, who works as an associate editor for The Boston Globe, wanted to get to the stadium early to claim the best spot to photograph the game. The press credentials were late in arriving but he was able to talk his way in using the connections he has worked so hard to build throughout his career.

He set up shop with his 800-millimeter lens and monopod in the second level of the stadium. As soon as Red Sox player David Ortiz swung the bat during the eighth inning of Game 2 of the American League Championship Series, Grossfeld knew it was going to be a home run. He turned his camera toward right field, which was where he thought the ball was going. He looked toward the bullpen just in time to see the ball, Hunter and a police officer all came into the frame.

“I knew he was going to go over at that point,” says Grossfeld. “I thought I had the shot but I didn’t know if it was sharp.”

After reviewing his images, he realized how well the photo turned out. Grossfeld didn’t realize how much attention the photo was getting until his 16-year-old son pointed out the buzz on social media.

“For me, it is way too much credit. David Ortiz got the homerun, I just captured it,” says Grossfeld. “There are at least a dozen people behind a photo other than the person who pushes the button.”

It’s not the first time Grossfeld has been in the spotlight. He won two Pulitzer Prizes, one in 1984 for his images showing the effects of war on the people of Lebanon and one in 1985 for images showing famine in Ethiopia and illegal aliens on the Mexican border. In September 2011, he was awarded the Isaiah Thomas Award in Publishing by RIT for his contributions to the industry.

Grossfeld says it’s been fun for him to see the reaction to the Red Sox photo and that it feels great to give the people of Boston something to smile about.

“I’ve covered so much bad stuff in my career so I’m really happy about the joy this is bringing Bostonians,” says Grossfeld, who has worked at The Boston Globe since 1975. “The people of Boston never give up. They are resilient and I think this picture captures that.”

As for whether Grossfeld thinks this is a perfect picture, he says there is always room for improvement. “If there is one thing my RIT background taught me, it is that it could always be better.”

He added that building long-lasting relationships, like the one that got him access to Sunday’s game, is one of the most important things students should focus on. He also advised that students try to pay less attention to their cell phones and more to the people and situations in front of them.

“Nothing beats hard work and hustle,” says Grossfeld. “I believe in showing compassion for others and that good karma goes a long way.”