ASL version of 'Let It Go' released on Sunday 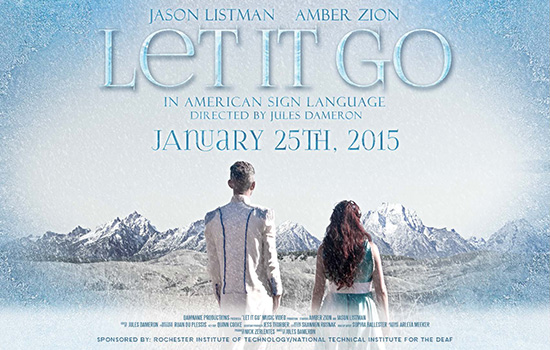 Two graduates from Rochester Institute of Technology’s National Technical Institute for the Deaf whose performances have been viewed by millions will star in an American Sign Language music video of the popular “Let It Go” song, from the Disney movie Frozen.

The video will be released Sunday, two days after an invitation-only screening and networking party Friday at the Complete Actors Place in Sherman Oaks, Calif.

Starring in the video are Amber Zion, ’04, an actress who signed the national anthem at last year’s Super Bowl, and Jason Listman ’07,’09, an assistant professor who teaches American Sign Language to interpreting students at NTID. The video had an all-deaf crew, including noted film director Jules Dameron.

Other RIT/NTID graduates involved include Jess Thurber ’06, assistant producer; Ruan du Plessis ’11, director of photography; and Erik Call ’06, who worked behind the scenes.

The video is expected to be released at 11 a.m. (EST) Sunday on the YouTube page of the Deaf Professional Arts Network, or D-PAN. The network was created by Sean Forbes, a 2008 RIT/NTID Applied Arts and Sciences graduate who performs in live shows and an array of music videos.

“The rise in popularity of music videos in sign language is due in large measure to people like Jules, and RIT/NTID alumni Sean Forbes, Amber, Jason and all those who worked on this video,” said NTID President Gerry Buckley. “We are proud to help sponsor this video as a way to ensure that all audiences—deaf and hearing—get to enjoy the richness and beauty of signed expression.”

The video, which is co-sponsored by RIT/NTID and was approved by Disney, was filmed in September over three days in Paso Robles, Calif., a community two hours north of Los Angeles.

“It was a phenomenal experience to work with a deaf crew, especially with Amber and Jules,” Listman said. “I think the song is perfect because it represents the value of social justice, the concept that everyone deserves equal opportunities in this society and challenge the status quo. We should embrace ourselves and be true to ourselves. Let it go! This applies to a lot of deaf people with multiple identities too.”

“Because the song has metaphors, it is nice to open your mind and translate that into ASL,” said Zion. “I love the challenges, to put all of my hard work into it.”

She said Disney released 25 versions of “Let It Go” in various languages. “They haven’t done one in ASL. I really hope they would add this music video into their list.”

Forbes said he is happy to add the “Let It Go” video to his website. “I’ve always admired Jason and Amber’s work, shown their videos on D-PAN and am glad to see them working together on this project.”

The video is the latest of a series of music videos performed in sign language and posted on YouTube. The technology didn’t exist when Listman was growing up. He discovered music when he was 13, and has since posted five ASL music videos, generating more than 1 million views cumulatively. He says he’s happy there is an outlet that allows him to share his struggles and joys through translating songs into ASL, show others that songs can be translated in sign language and show hearing people that deaf people should be in the spotlight when it comes to signing songs in ASL.

“It makes me feel good,” Listman said. “I’m excited to know I inspire a lot of people out there, especially in the deaf community.”