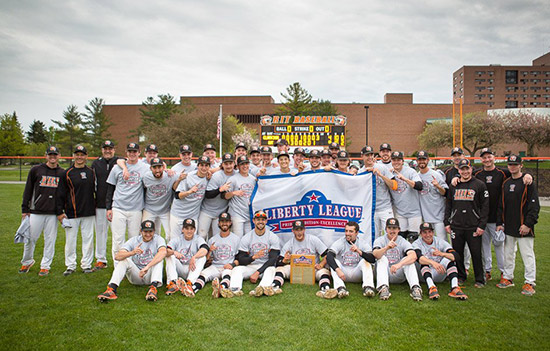 Members of the RIT baseball team celebrate their first Liberty League Tournament Championship after defeating Clarkson University, 9-4, on May 12. The Tigers (33-7) will make their first NCAA Division III Baseball Tournament Appearance in the program’s 65-year history. They enter the tournament with a program record 33 wins, 12 straight victories, and are 26-1 over their last 27 games.

Led by Liberty League Tournament Most Valuable Player Mike Myers (Hamlin, NY/Brockport), the Tigers led 6-0 after three innings and 9-1 after eight, before Clarkson mounted a quick rally with three ninth inning runs. RIT out-hit Clarkson, 15-10, as all nine starters had at least one hit.

Myers enjoyed a tremendous Liberty League Tournament, going 6-for-10 with a home run, double, two walks, four RBIs and six runs scored in the three wins. In addition, Myers caught all 27 innings and threw out one would-be base stealer.

"I am really proud of what the guys accomplished in winning our first Liberty League Championship," said RIT head coach Rob Grow. "It's been an incredible year and we are looking forward to moving on to NCAA regionals next week."

RIT has now won 12 consecutive games and is 26-1 over its last 27 contests. RIT's 33 wins are a single-season program record. The Tigers set Liberty League regular season records with 22 wins and a .957 winning percentage (22-1), then rolled through the postseason tournament, out-scoring No. 4 seed Vassar, No. 2 Union, and No. 3 Clarkson by a combined 26-11 to claim the title.

All-Tournament Team selection Jameson Moran (Geneseo, NY/Geneseo) improved to 6-0 on the season, scattering seven hits, while allowing just one run and striking out five batters over eight strong innings of work to lower his earned run average to 2.20. Brett Bouchard (Fairport, NY/Fairport) came on for his 21st appearance of the season to close out the game in the ninth inning.

Dom Pirro, an All-Tournament Team pick, led Clarkson by going 4-for-5 with a run scored. Chris Miller was 2-for-4 with a solo home run, while Connor Dietrich drove in a pair of runs. Rory Corcoran took the loss on the mound, allowing seven hits and six runs over 2 1/3 innings.

RIT would score three times in the second inning to take a 3-0 lead, as Zeglen led off with a double and moved to third on a single by Myers. With one out, Sammon singled to center field, scoring Zeglen to make it 1-0. Schulz hit a deep drive to right field that landed just out of the reach of the right fielder, scoring a pair of runs.

The Tigers would add to the lead with three more runs in the third inning, knocking out Corcoran and making it a 6-0 game. Gorman started the inning by legging out an infield single. He moved to third on a long double to right field by Brett Kajganich (North Royalton, OH/Holy Name). After Zeglen knocked in Gorman with a sacrifice fly to center field, Myers stepped up and launched a rocket of a home run through the wind to right field for his fifth round-tripper of the season.

Kajganich's third inning double was his 16th of the season, a new RIT single-season record. He was also a Liberty League Championship All-Tournament Team selection.

Miller would get Clarkson on the board with a solo homer to right field in the fifth inning. RIT would answer with a pair of runs in the sixth inning on a run-scoring double by Navada Waterman (Coudersport, PA/Coudersport) and run-scoring single by Gorman to make it 8-1. Gorman would double home Waterman in the eighth inning for his fourth hit of the day, giving RIT an insurmountable 9-1 lead.

Clarkson would not quit and scored three runs in the ninth to make it 9-4. With two outs, Bouchard would field a comebacker and throw to first for the final out, as the Tigers poured out of the dugout to celebrate their first league title.

"I'd like to thank our coaching staff, alumni, and administration for the help and support they have given us throughout the year," said Grow, who played at RIT from 1985-88 and in his 25th season as head coach.

The Tigers have now scored 308 runs in 40 games this season. RIT's pitching staff has compiled a stingy 3.12 earned run average in 332 innings, as five different pitchers have at least five wins.

RIT is headed to the 2017 NCAA Division III Baseball Championship and compete in a six or eight team regional, starting Thursday, May 18. The tournament field will be announced on Sunday, May 14 or Monday, May 15. Stay tuned for more information on www.ritathletics.com