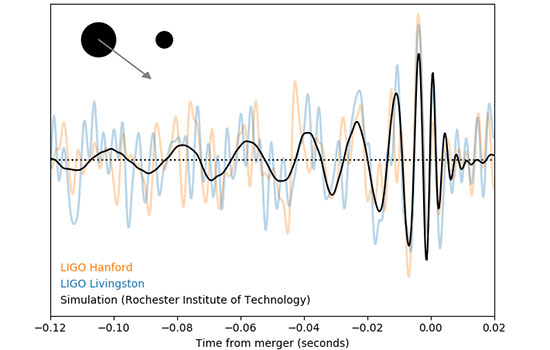 Comparing the GW170104 signal seen by LIGO (in blue and orange) with an RIT computer simulation of a black hole merger (in black). The black circles each represent one of the simulated black holes. Their sizes are in proportion to the black hole masses, with one being twice as massive as the other. The larger black hole was made to spin on an axis, shown by the gray arrow, which points in the direction of the black hole’s ‘north pole.’

Rochester Institute of Technology researchers continue to make significant contributions to gravitational wave astronomy, with the third detection of gravitational waves and a new black hole 49 times the size of our sun.

The LIGO collaboration today announced results from the detection of gravitational waves on Jan. 4. The discovery will be published in the journal Physical Review Letters.

RIT scientists helped the collaboration measure and interpret black hole spins and their alignment. These measurements can tell scientists what happens when massive stars die and transform into black holes.

The gravitational wave signal was produced from the collision of black holes. The newly found black hole, formed by the merger, has a mass about 49 times that of our sun. This fills in a gap between the masses of the two merged black holes detected previously by LIGO, with solar masses of 62 (first detection) and 21 (second detection).

“We can see the outlines of a population of black holes emerge,” said Richard O’Shaughnessy, associate professor in RIT’s School of Mathematical Sciences.

The LIGO paper cites O’Shaughnessy’s upcoming research, which was used in part, to help interpret the most recent event. He will present his work at the American Astronomical Society on June 5 in Austin, Texas.

The new observations rule out the possibility that pairs of heavy black holes have a lot of net-aligned spin and agree with LIGO’s 2015 breakthrough observation, he noted.

“That’s either because heavy black hole spins are small, or because they’re tilted, so their net effect cancels out,” O’Shaughnessy said. “Different teams have made different predictions for black hole spins. The most extreme predictions are ruled out. As for the others, time will tell.”

“At RIT, we are working on improving the spin measurements of the black holes by solving to high accuracy Einstein’s equations and directly comparing those theoretical predictions with LIGO’s observed signals,” Lousto said.

Researchers in RIT’s Center for Computational Relativity and Gravitation directly compared gravitational wave signals to their computer simulations based on Albert Einstein’s equations. The recent observations further tested Einstein’s general theory of relativity and prediction that gravitational waves always move at the speed of light. LIGO saw no evidence that the waves travelled at different speeds.

“This third event lies in an mass range intermediate to the previous two events and shows that black hole mergers are common in the universe,” said Manuela Campanelli, director of RIT’s Center for Computational Relativity and Gravitation and Frontier in Gravitational Astrophysics, an RIT signature research area.

The new detection occurred during LIGO’s current observing run, which began Nov. 30, 2016, and will continue through the summer. LIGO observations are carried out by twin detectors—one in Hanford, Wash., and the other in Livingston, La.—operated by Caltech and Massachusetts Institute of Technology with funding from the National Science Foundation.

LIGO made the first-ever direct observation of gravitational waves in September 2015 and a second detection in December 2015. The breakthrough LIGO paper prominently cites 2005 landmark research done by Campanelli and her team on binary black hole mergers. Based on this milestone work, Lousto and Healy numerically modeled the merger of a pair of black holes and simulated gravitational waveforms that match the first LIGO detection.

LIGO is funded by the National Science Foundation, and operated by MIT and Caltech, which conceived and built the project. Financial support for the Advanced LIGO project was led by NSF with Germany (Max Planck Society), the U.K. (Science and Technology Facilities Council) and Australia (Australian Research Council) making significant commitments and contributions to the project. More than 1,000 scientists from around the world participate in the effort through the LIGO Scientific Collaboration, which includes the GEO Collaboration. LIGO partners with the Virgo Collaboration, a consortium including 280 additional scientists throughout Europe supported by the Centre National de la Recherche Scientifique,, the Istituto Nazionale di Fisica Nucleare,, and Nikhef, as well as Virgo’s host institution, the European Gravitational Observatory. Additional partners are listed at http://ligo.org/partners.php.