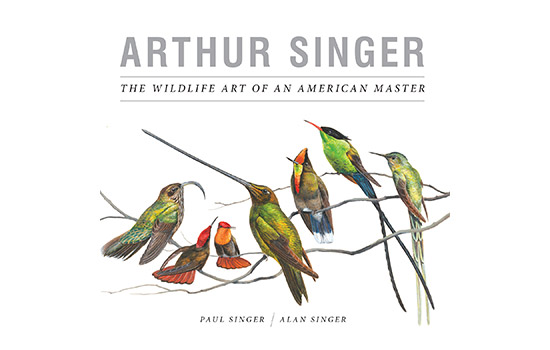 A new book documents the life and work of one of the world’s finest painters of birds. Arthur Singer (1917-1990) redefined the concept of the bird guide with his 1966 release, The Golden Field Guide to Birds of North America, and millions have enjoyed Singer’s work published in books, magazines, prints and commemorative stamps.

The biography, Arthur Singer: the Wildlife Art of an American Master, written by his sons Paul and Alan Singer, illustrated profusely with color images, is published by RIT Press, the scholarly publishing enterprise at Rochester Institute of Technology.

“For years, my father had been in the field drawing and photographing birds, and knowing their behavior, he felt they should be shown naturalistically,” said Alan Singer, a School of Art professor in the College of Imaging Arts and Sciences. “He added light and shadow and developed paintings in his bird guides that show the environment where birds are often seen.”

Born in New York City in 1917, Singer began illustrating wildlife as a young teenager after admiring the work of John James Audobon and taking family trips to the Bronx Zoo and the American Museum of Natural History. Singer loved jazz music and in the 1930s, he befriended jazz greats including Duke Ellington and Cab Calloway, earning early commercial success drawing caricatures of the artists that would be published in local newspapers and jazz magazines across the country. After receiving an art degree from the Cooper Union, Singer joined the army following the U.S. entry into World War II.

When a general noticed Singer’s considerable talent painting a watercolor, Singer was transferred to the top-secret Company C of the 603rd Camouflage Engineers, where he spent three years creating camouflage and other forms of visual deception to mislead German intelligence. The story of this group of artists, dubbed “The Ghost Army,” was chronicled in a 2014 PBS documentary by the same name.

Following the war’s conclusion and a brief stint in the advertising industry, Singer found his calling as a full-time illustrator and artist depicting wildlife, most notably birds. Singer produced some of his most popular works in the 1950s and ’60s, including Birds of the World, and his guide to Birds of North America, which is still in print after selling millions of copies.

Millions saw Singer’s illustrations in 1982 when the U.S. Postal Service issued a set of 50 official state bird and flower stamps illustrated by Singer and his son and co-author of the biography, Alan Singer. The set became one of the best-selling commemorative stamp sheets in U.S. postal history.

The Singer brothers worked on the book for more than two years to commemorate the 25th anniversary of their father’s passing, poring over letters, never-before-seen illustrations and other mementos from the artist’s personal collection. “This is first time the public will be able to get a cross section of my father’s life work from his childhood to his last years,” said Alan Singer.

Arthur Singer: the Wildlife Art of an American Master is available to preorder in hardcover for $60 at the RIT Press website or by calling RIT Press at 585-475-6766. Copies will begin shipping in July.

A companion exhibition at the RIT University Gallery will display a life-spanning selection of illustrations by Singer from Aug. 7 to Oct. 28. A public reception will be held Sept. 8 from 5-7 p.m.