Honorary doctorate will be bestowed 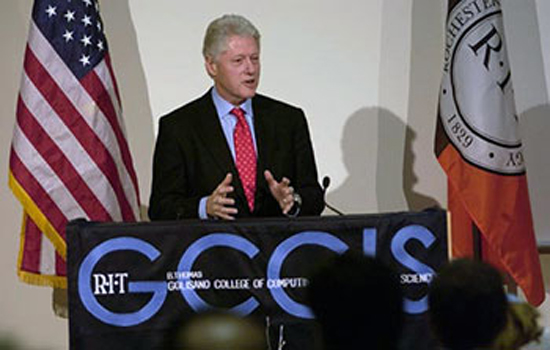 President Bill Clinton will be the speaker at this year’s Academic Convocation.

William Jefferson Clinton will be the keynote speaker at RIT’s 2007 Academic Convocation, part of the university’s 122nd Commencement. A graduate of Georgetown University, he won a Rhodes Scholarship to Oxford University in 1968. He received a law degree from Yale University in 1973 and, shortly thereafter, entered politics in Arkansas where he served as state attorney general and, later, two terms as governor.

Clinton was elected president of the United States in 1992 and again in 1996. His accomplishments as president include increasing investment in education, providing tax relief for working families, helping millions of Americans move from welfare to work, expanding access to technology, encouraging investment in underserved communities, protecting the environment, countering the threat of terrorism and promoting peace and strengthening democracy around the world.

After leaving the White House, Clinton established the William J. Clinton Foundation with the mission to strengthen the capacity of people in the United States and throughout the world to meet the challenges of global interdependence. To achieve this, the Clinton Foundation is focused on four critical areas: health security, with an emphasis on HIV/AIDS; economic empowerment; leadership development and citizen service; and racial, ethnic and religious reconciliation.

Following Hurricane Katrina in August 2005, Clinton and President George H.W. Bush established the Bush-Clinton Katrina Fund to assist survivors in the rebuilding effort. Clinton also served as United Nations Special Envoy for Tsunami Recovery. Clinton will receive an honorary doctorate of humane letters during Academic Convocation, which takes place at 10 a.m. on Friday, May 25, in U Lot