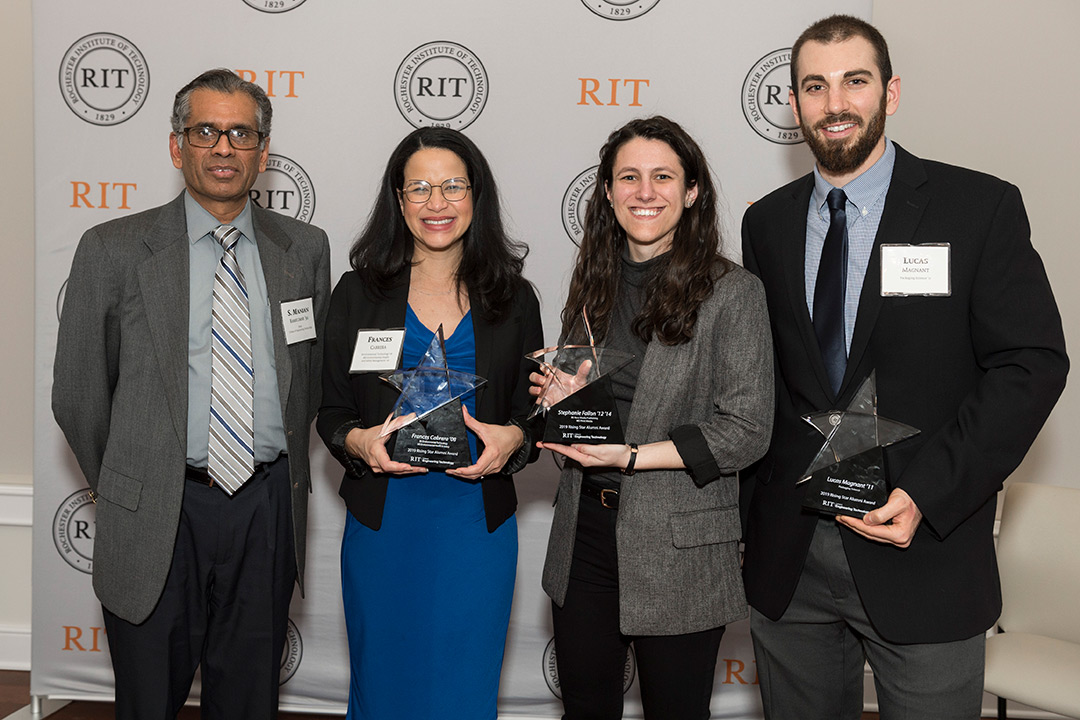 Five alumni from RIT’s College of Engineering Technology were honored with Rising Star awards during a campus reception last month. Given to alumni who graduated from CET within the past five to 10 years, the awardees were recognized for outstanding achievements early in their careers, for significant public service contributions and in helping to advance the careers of new professionals.

All of the alumni have remained active with the university and their respective program departments since graduating, returning to campus to serve on department and college industrial advisory boards, to participate in career fair recruiting activities and to mentor current students on projects and about future careers options.

“College of Engineering Technology alumni are 30,000-strong, and integral to the success of our college and its recognition in the real world,” said S. Manian Ramkumar, interim dean of the college to invited guests. “Our college is known as the place where students learn theory through hands-on, minds-on learning and interactive teams. The alumni we have honored this evening exemplify our commitment and dedication to experiential learning and academic excellence. These alumni ‘hit the ground running,’ and haven’t stopped since graduation. We couldn’t be more proud.”

Jordan Darling ’15 (mechanical engineering technology): As vice president of Nikola Powersport, Darling oversees the divisions of both land and sea vehicles, and with his team, will bring several new off highway vehicles and personal watercraft to market this year. Prior to Nikola Powersports, Darling founded Free Form Factory Inc., creating the manufacturing technology for personal watercraft, designing and building the first mainstream electric personal water craft, until being acquired by Nikola Corp. in 2017. He holds several patents in powersports and manufacturing technologies.

Frances Cabrera ’08 (environmental technology, environmental health & safety management): Cabrera is vice president at Barclays, joining its corporate real estate service team in 2011. She is part of the central environmental team for the bank, developing carbon reporting protocols and implementing green building initiatives, primarily for company data centers. Recently, her role has expanded into the health, safety and operational risk areas of the organization, and she has become part of the global operational governance team for her department. Cabrera also is co-founder and co-chair of Barclay’s Environmental Network of the Americas, which helps bring together employees from all parts of the company to promote more ‘green’ financial products and client engagement. She has been part of the environmental health and safety management department’s industrial advisory board since 2011.

Mark Dabrowski ’08 (computer engineering technology): In 2008, Dabrowski co-founded Teldio, a two-way radio applications company. Currently the director of research and development, he also has taken on the role of interim co-CEO. He has received several young professional awards and made the top 100 Wireless Wavemakers list. Outside of the workplace, he is director of technology for Water Rangers, a not-for-profit organization, where he helps citizens learn about, and advocate for, their local rivers, lakes and streams. He is also part of the founding team for TEDx Kanata.

Lucas Magnant ’11 (packaging science): Magnant has been at Keurig for four years. As engineering manager, packaging engineering for the international company, Magnant leads a six-member supply chain packaging engineering team, as well as design and dynamics labs. The group is responsible for all design and performance validation for secondary/tertiary packaging, plus primary bottles and cans, as well as productivity pipeline development and delivering company-wide pack productivity targets.

Stephanie Fallon ’12, ’14 (new media publishing, print media): As associate manager of Prepress and Digital Production for ESPN The Magazine, Fallon oversees image editing, print production and digital edition output. During her nearly four years on the team, ESPN The Magazine has won multiple GAA Golden Cylinder awards for print quality, as well as the prestigious ASME Ellie award for general excellence. In addition to her professional career, Fallon is involved in community organizations such as the American Legion Auxiliary’s Empire Girl State Program, which teaches high school senior girls from New York state about politics and government. A former member of the group, Fallon has been a volunteer and staff member for more than 10 years.