‘Delve into dungeons’ at Imagine RIT 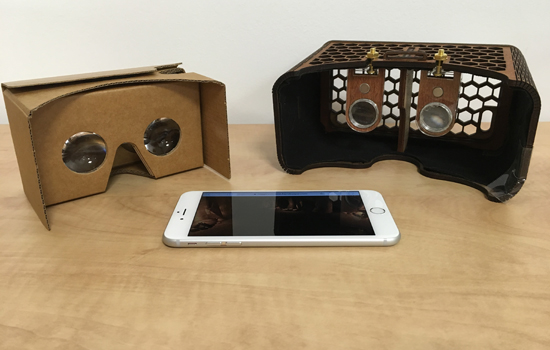 RIT’s Center for Media, Arts, Games, Interaction and Creativity (MAGIC) hosts several exhibits in Student Innovation Hall, including “The MAGICal World of Virtual Reality,” where visitors can create their own 3D environments and view them using cell phones and virtual reality viewers.

A new exhibit at RIT’s Imagine festival allows visitors to create their own imaginary two-dimensional dungeon maps, and then view them in a 3D format using virtual reality (VR) technology.

“The MAGICal World of Virtual Reality” features new technology called DelVR, a toolset developed by 13 students in RIT’s Center for Media, Arts, Games, Interaction and Creativity. According to Project Manager Doug Mansell, DelVR is a web application designed to help game enthusiasts create dungeon maps for popular role-playing games, and then view them using their mobile phones along with low-cost, easily assembled virtual-reality headsets such as Google Cardboard.

“During the Imagine festival, visitors to our booth will actually create on computers their own dungeons, including hallways, rooms and props such as crates, crystals and firepits—similar to what’s found in games like Dungeons and Dragons and other role-playing games,” said Mansell, a fourth-year game design and development student from Salt Point, N.Y.

A link to their dungeon designs can be sent to friends and fellow gamers who can view them—in 3D—on cell phones with the assistance of virtual reality devices.

Mansell said what’s new is the increased use of virtual reality in the gaming environment, although some hindrances to VR experiences still exist for the casual user. He cited that most incorporate large headsets that are expensive and require high-tech graphics cards. The students’ creation is much more accessible, using only a cell phone and a $15 Google Cardboard or similar device.

“Virtual reality is very new in the gaming industry,” said Mansell. “We wanted to dip our toes in the technology and have something really exciting to demonstrate at Imagine. It has really cool applications, like in this table-top gaming environment.”