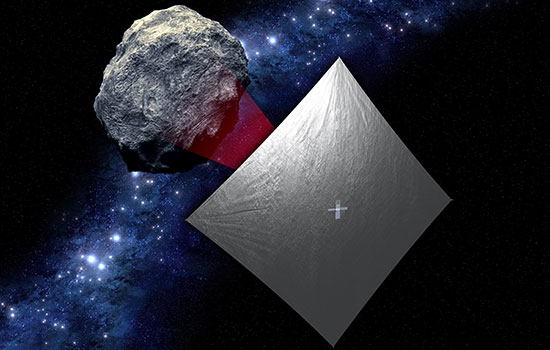 Spacecraft outfitted with sails and propelled by the sun are no longer the stuff of science fiction or theoretical space missions. Now, a Rochester Institute of Technology researcher is taking solar sailing to the next level with advanced photonic materials.

“Diffractive films may also be designed to replace heavy and failure-prone mechanical systems with lighter electro-optic controls having no moving parts,” he said.

“CubeSats are becoming of great national importance for science, security and commercial purposes,” Swartzlander said. “The potential to raise, de-orbit or station-keep hundreds of CubeSats from low Earth orbit would be a recognized game changer that would build enthusiasm and advocacy among the growing small-satellite community of students, entrepreneurs and aerospace scientists and engineers.”

NEA Scout will be the first CubeSat science mission having attached sails. It is one of 13 satellites that will conduct science and technology investigations as part of NASA’s Exploration Mission-1. EM-1 is slated to launch this year on the new Space Launch System rocket. When deployed, NEA Scout’s aluminum coated polyimide sail will reflect sunlight to propel the reconnaissance robotic spacecraft on its two-year cruise.

Swartzlander said diffractive metafilm sails could correct known limitations of reflective metallic sails—overheating, inefficient use of photons and excessive tilt of the spacecraft—because the new materials can:

“Diffractive sails may also be designed for laser-based propulsion, a decades-old concept that has recently attracted significant interest from private investors, resulting in a program called Breakthrough Starshot,” Swartzlander said.

A leader in his field, Swartzlander has conducted pioneering research on the optical vortex coronagraph, optical vortices, solitons, coherence theory, optical tweezers and optical lift. He is editor-in-chief of the Journal of the Optical Society of America B. 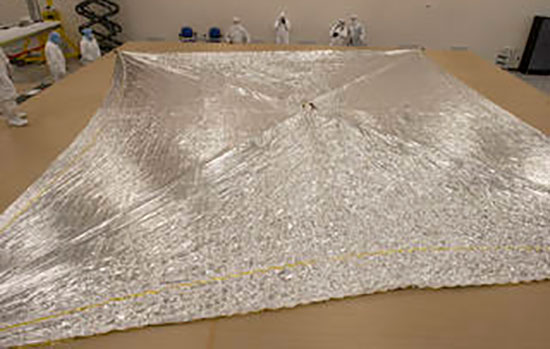