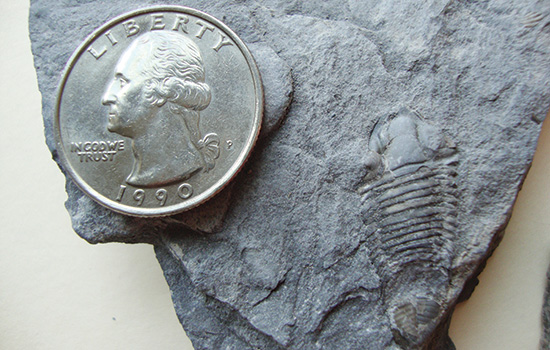 The trilobite fossil, found during RIT's

The 12-year-old held 350 million years  of history in the palm of his hand.

While chipping away at large rocks in Little Beard’s Creek in Livingston County, Nate Yax dislodged a trilobite, an ancient sea creature that lived before dinosaurs roamed the Earth.

The tiny specimen was among the  biggest finds at the bioscience summer camp “Fun with Fossils,” sponsored by the Center for Bioscience Education and Technology in RIT’s Institute of Health Sciences and Technology. More than 70 middle- and high-school-age kids attend  the center’s bioscience exploration and discovery camps annually. This year’s  discovery was the kind that makes kids  like Nate, who love foraging for fossils,  end up really “digging” science.

“I went to one rock that was huge, propped up a little bit, I chipped a couple of times at it, and I got one,” says the  seventh-grader from Wayland-Cohocton Middle School. “I opened it up and said,  ‘Oh my God, yes!’ Because I had finally found a trilobite that day.”

A dipleura dekayi trilobite looks like  a cross between a horseshoe crab and a centipede. It is from the Middle Devonian Period, a time millions of years ago when Earth was predominantly water.

“It was like a sea potato-bug,” says Nate, laughing.

While not the first trilobite ever found, Nate’s was one of the smaller ones discovered in the area. It was fully intact, with no broken or missing parts. It was also a complete set, consisting of the fossil and its “counterpart,” the rock with the fossil’s impression, says John Handley, a fellow of the Rochester Academy of Science and a research associate with the Paleontological Research Institution in Ithaca. He and Logan Newman, the camp instructor, a  biology teacher at East High School, led  the campers on the dig this past summer.

“The significance of it is the fact that  it is small,” says Handley ‘96 (imaging  science). “It’s a young trilobite. It could  be diminutive because of the environment or a ‘child’ growing to adulthood. But we don’t know for sure because it has to be looked at by experts.”

Nate donated the fossil to the Museum of the Earth, part of the Paleontological Research Institution. The museum houses one of the largest fossil collections in the United States.

New York has significant rock formations with some old rocks exposed, close to the surface. Many of those layers are fossil-bearing, particularly from the Devonian and Silurian geological formations of  more than 300 million years ago, with  findings renown throughout the world,  says Handley. It was not surprising to  him that Nate tapped into a rock and  unearthed a tiny bit of history.

“One of the advantages of having kids out in the field is that they are not preconditioned to look for certain things,” Handley says. “Nate was looking at a rock that many people would not have looked at because it was in a streambed. We have to look at these fossils as data. You are collecting data about this ancient life form, and we’re getting the whole story.”

For Nate, there was never a question  of keeping the fossil. “I figured I’d either lose it or something would happen to  it in my house because I have two dogs.  Just finding it was the fun part for me.  I have other trilobites at home, different species. Before I even knew it was rare  I was just so happy because I had found  a trilobite.” 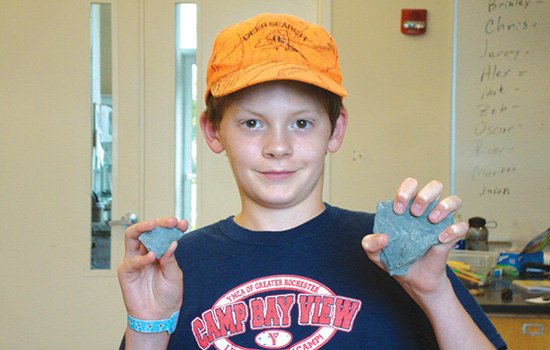