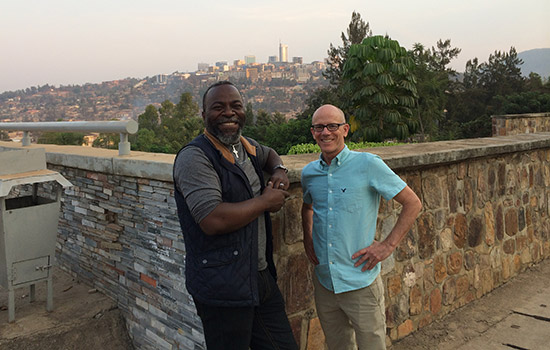 Associate Professor Ernest Fokoue, left, and Professor Anthony Vodacek on a recent trip to Rwanda where they are working to develop higher education.

Professors in RIT’s College of Science are working with faculty at the University of Rwanda and the University of Kibungo, promoting that nation’s development by helping to build graduate programs and a culture of scholarship in a country healing from civil war and genocide.

Higher education in Rwanda has been a priority during Anthony Vodacek’s two-year tenure as RIT’s Paul and Francena Miller Chair in International Education. Through strategic use of travel funding, Vodacek—whose tenure as chair ends in December—has created the potential for collaborative research opportunities and meaningful international experiences for students.

Since 2008, Vodacek, a professor in RIT’s Chester F. Carlson Center for Imaging Science, has visited Rwanda nearly 20 times. His work there focuses on remote sensing and environmental research and has led to many contacts in higher education.

Vodacek’s colleagues at the URwanda public education system invited him to work on proposals to build graduate centers through a World Bank program. URwanda was awarded four African Centers of Excellence in Higher Education, three of which named RIT as their primary international partner. They are the Centers of Excellence in Data Science, the Internet of Things and for Teaching and Learning Mathematics and Science. RIT’s role will be to provide teaching and research-supervision of MS and Ph.D. students and collaboration on joint proposals and journal articles.

“The problem is that if they don’t return, it’s a significant brain drain,” Vodacek said.

The total population in Africa is 1.2 billion, and more than 600 million are under the age of 20, Vodacek said.

Many students in this generation of African scientists, engineers and designers will be shaped by the World Bank’s Centers of Excellence, and RIT’s expertise will be part of their education, said James Myers, associate provost of International Education and Global Programs.

“RIT’s global strategy focusses on being a leader engaged in the Centers of Excellence reflecting our strengths in science, engineering, technology and the arts,” Myers said.

During the proposal process, Vodacek recruited Ernest Fokoué, an associate professor in the School of Mathematical Sciences, and Scott Franklin, director of RIT’s Center for Advancing STEM Teaching, Learning & Evaluation.

With Miller chair funding, Vodacek, Fokoué and Franklin traveled to Rwanda to establish research collaborations and present at conferences. In July, RIT co-hosted a scientific conference at the University of Kibungo, a small private institution, and met with the leaders of the African Centers for Excellence at URwanda.

“My own feeling is that Africa is going to be the continent of this century in a similar way the development of Asia marked the end of the last century,” Vodacek said. “My effort as Miller Chair is to position RIT to contribute to development in Rwanda and ultimately across Africa.”