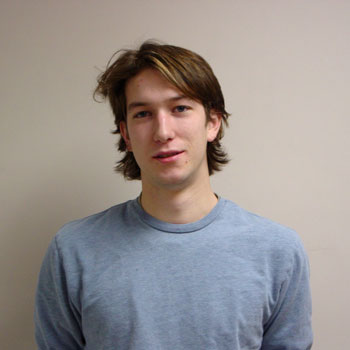 Graduate student Dwight Cooke, a student in the Kate Gleason College of Engineering at Rochester Institute of Technology, won the top award in the graduate research paper category at the American Indian Science and Engineering Society Conference held recently in Portland, Ore. He was one of several RIT students attending the annual event focusing on American Indian and First Nations students in the science, technology, engineering and mathematics fields in United States colleges.

“This was my first time at the AISES conference,” says Cooke, a sixth-year mechanical engineering graduate student. He is a St. Regis Mohawk Tribe member from Castleton, N.Y. “One thing I realized during the presentations, and after I won the award for the graduate oral presentation, was how well I have been prepared for creating and speaking for presentations such as this.”

Cooke’s paper, “Modeling the intrusion of a gas diffusion layer into flow channels of a proton exchange membrane fuel cell,” details how the gas diffusion layer material deforms while it is compressed in an operating fuel cell, he explains. The results help to gain insight on material properties and potential decreased performance depending on the compressive force.

Six students, including Cooke, attended the conference along with three RIT professors. RIT third-year environmental science major Robyn Wilson (Cherokee/Keetoowah) won third place for undergraduate presentation. Both Cooke and Wilson are members of the RIT chapter of the American Indian Science and Engineering Society and part of the Future Stewards Initiative. FSI, a partnership between RIT and Native American, Alaska Native and First Nations governments developed to provide educational and experiential programs for future leaders of tribal communities.