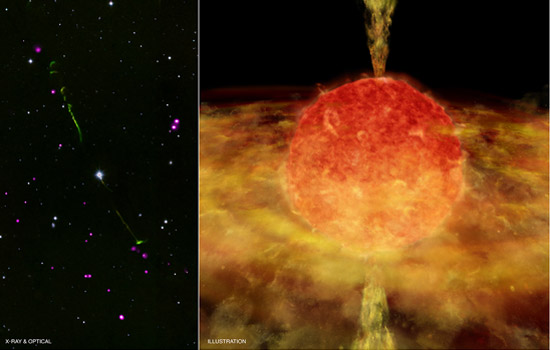 The composite image on the left shows X-ray and optical data for BP Piscium (BP Psc), a more evolved version of our Sun about 1,000 light years from Earth. Chandra X-ray Observatory data are colored in purple, and optical data from the 3-meter Shane telescope at Lick Observatory are shown in orange, green and blue. BP Psc is surrounded by a dusty and gaseous disk and has a pair of jets several light years long blasting out of the system. A close-up view is shown by the artist’s impression on the right.

The disk and the jets, seen distinctly in the optical data, provide evidence for a recent and catastrophic interaction in which BP Psc consumed a nearby star or giant planet. This happened when BP Psc ran out of nuclear fuel and expanded into its “red giant” phase.

An astronomer may have caught a cannibalistic star in the act of devouring a companion and making a second generation of exoplanets from the resulting orbiting disk.

Using data from NASA’s Chandra X-ray Observatory, Joel Kastner, professor at Rochester Institute of Technology, has found evidence that a variable star in the constellation of Pisces, BP Piscium, is not the young star it appears to be, but is more likely a one billion-year-old red giant that has gobbled up a star or planet in its vicinity.

The star’s extreme properties have puzzled astronomers since Kastner and Ben Zuckerman, professor at the University of California, Los Angeles, first looked at BP Psc 15 years ago. Conflicting characteristics have defied the star’s classification as either young or old.

Kastner attributes the star’s potentially deceptive youthful appearance to two things: an orbiting disk that resembles the sort that forms planets around young stars and prominent jets extending from the poles of the star that eject material at high velocity. A typical young star accretes material from its orbiting disk as debris from the disk falls onto the star. In turn, the star incorporates about 90 percent of the material and recycles the remainder through its jets.

Crucial details left Kastner and his colleagues doubtful about the youth of the star, however. For one thing, the star is isolated, whereas most young stars form in clusters.

“As hard as people have looked, they have not been able to find a young star near BP Psc,” says Kastner, a professor in RIT’s Chester F. Carlson Center for Imaging Science. “That was one of several things that made Ben [Zuckerman] and me suspect that it wasn’t actually young.”

Second, this enigmatic star in the Pisces constellation lacks the large abundance of lithium on its surface that is typical of young stars. Older stars lose their lithium in nuclear reactions when mixing and churning folds the gases into the center of the star. According to Kastner, other key spectral features involving the star’s radius and surface gravity also point to the star’s advanced age.

Kastner is ready to close the debate with data obtained from the Chandra X-ray Observatory.

“The last piece of evidence, which, to me, is the nail in the coffin that BP Psc is old rather than young, is that its rate of X-ray production is very similar to old, yet rapidly spinning, giant stars that have surface temperatures similar to BP Psc,” Kastner says.

If BP Psc were a young star, it would emit X-rays in the hundreds, even up to a few thousand, in a day’s observing time with Chandra, Kastner notes. Instead, it is a weak X-ray source.

“We stared at BP Psc for one day with Chandra and only detected about 18 X-rays,” Kastner says. “We could almost name them.”

The rate of X-rays coming from the star are in keeping with a class of rapidly rotating old stars having similar temperature to BP Psc, Kastner says. This class is thought to be the result of one star swallowing another close companion star. These giant stars’ rates of X-ray production and their rapid spinning suggest they have engaged in such stellar cannibalism.

“These giant stars’ companions have fallen inside and spun them up,” Kastner says. “But we’ve never actually caught one in the act. I think BP Psc is an example of such an interaction. Our working speculation is that we are observing the star right at the point at which it has swallowed its companion and hence formed a disk. Some of the material that used to be its companion has fallen onto the star and some has been shot out at high speeds, and that’s what we’re seeing.”

The enigmatic star is likely about a billion years old and just entering the red giant stage in its life cycle in which it swells to digest its star or planet companion.

“It could be a small star or a large planet,” Kastner says. “We don’t know which it could be, but we’re very interested in finding out.”

More work needs to be done on the variable star in Kastner’s study. Astronomers are presently deciphering infrared spectra to determine the specific kinds of dust orbiting the star and look for evidence of planets forming in the disk.

“In order to understand the extrasolar planets that are now being discovered by the dozen, we need to figure out how planets might be forming and therefore where we should go look for them,” Kastner says. “I think this object is especially interesting because it gives us a good shot at finding young planets around an old star.”

Kastner’s findings were published in a recent issue of the Astrophysical Journal (Letters), and include contributions by Rodolfo Montez, a doctoral candidate in the astrophysical sciences and technology program in RIT’s Center for Imaging Science. Other co-authors were Nicolas Grosso of the University of Strasbourg, Ben Zuckerman from University of California, Los Angeles, Marshall Perrin from the Space Telescope Science Institute, Thierry Forveille of the Grenoble Astrophysics Laboratory in France and James Graham from University of California, Berkeley.

About RIT: Rochester Institute of Technology is internationally recognized for academic leadership in computing, engineering, imaging technology, and fine and applied arts, in addition to unparalleled support services for students with hearing loss. Nearly 17,000 full- and part-time students are enrolled in more than 200 career-oriented and professional programs at RIT, and its cooperative education program is one of the oldest and largest in the nation.