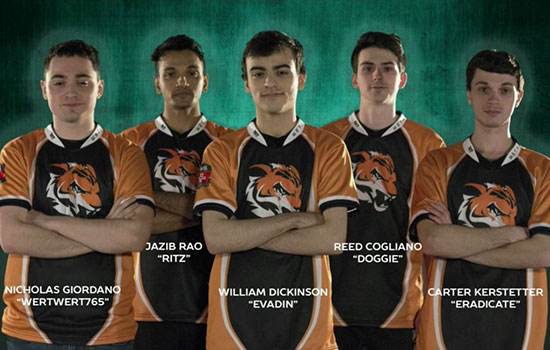 An RIT esports team is ranked as one of the top collegiate Dota 2 teams in North America, making it to the finals of the AVGL and CSL college championships in April.

A team of Rochester Institute of Technology students has become one of the best collegiate Dota 2 teams in North America, making it to the finals of two national championships.

On April 15, the RIT esports team was flown out to compete in the finals for the American Video Game League’s (AVGL) April Anarchy, a national collegiate esports championship hosted in Long Beach, Calif. Playing in front of an in-person and online audience, RIT was beat by a student team from University of British Columbia. For second place, the RIT team won $3,000.

On April 28, the RIT team is heading back to California to take on McMaster University in the final four of the Collegiate Starleague (CSL) Grand Finals. The winner of that match will face the winner of University of California, Davis vs. Stony Brook University. The top team will win $10,000.

“The tournaments are a great experience because not only do we get flown out to LA, but we are treated like celebrities,” said Reed Cogliano, a second-year computer science major from Carlisle, Mass.

“I like playing Dota 2 casually, however it is nice to be more competitive with it and actually play to win,” said Kerstetter. “I like being able to compete and have the chance to play more competitive and coordinated games with a team.”

The RIT team practices about four times a week, depending on how busy they are with classes.

“They try to get scrims against decent teams, but due to their dominance this year, it’s been hard to regularly find teams that are good enough for them to get something useful out of the games,” said Belisle, who is manager of the team. “The game is ridiculously complicated and takes immense dedication to play at a high level.”

According to the RIT team, what makes them successful is their different playstyle.

“A lot of teams like to group up and go for the easier execution five-man strategies, but RIT is good at countering this through split pushing,” said Benjamin Morgan. “The extra pressure on their lanes forces them to use TPs in bad situations, splitting them up and allowing us to pick better engagements. This also delays the games, allowing us to take over late in the game where we are probably the strongest.”

Dota 2 is a computer game where two teams of five players must occupy and defend their own bases on the map. Players control one of the 115 possible powerful characters, known as “heroes,” who all have unique abilities and styles of play. A team wins by being the first to destroy a large structure located in the opposing team’s base, called “The Ancient.”