The Eye Has It: How Student-Geologists Learn in the Field 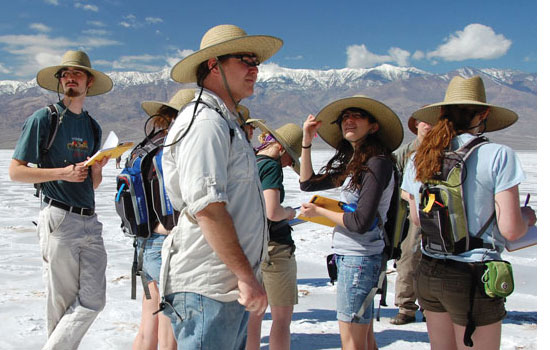 A group of students from the University of Rochester wear eye trackers while exploring Badwater Basin in California’s Death Valley National Park. Scientists from RIT and UR are teaming up to learn how beginning geologists gain expertise in the field and whether the experience can be simulated through virtual field trips.

Sending 13 people into the wild wearing eye trackers was a risky idea.

Nevertheless, the National Science Foundation funded the five-year joint project between RIT and University of Rochester to explore how novice geologists learn in the field and how their learning experience might translate to the classroom. Through the use of eye-tracking analysis and the capture of ultra-high resolution imagery, the project aims to improve the training of future geoscientists and create interest in a field experiencing low enrollment despite international concern about energy resources, climate change, earthquakes and volcanic hazards.

The project introduces a new way to explore differences between novices and experts, and how people absorb information from their surroundings. For RIT, the study also represents an early collaborative effort involving the Center for Student Innovation.

UR cognitive scientist Robert Jacobs, who leads the overall project, tapped his RIT colleagues Pelz and Mitchell Rosen, research professor in the Center for Student Innovation, to provide the technological component of the study. RIT, which received nearly half of the $2 million NSF grant, is conducting the eye tracking and analysis, and the audio and visual capture of the natural scenery.

The backdrop for the first field trip in the study was a nine-day excursion, March 7–15, connected to an introductory geology course, Earthquakes, Volcanoes and Mountain Ranges in California: A Field Quest, taught by John Tarduno, a geophysicist at the UR.

Pelz and alumnus Jason Babcock, tracked the eye movements of 10 UR students and three experts observing geological formations from San Francisco to Yosemite National Park. The subjects wore a backpack developed by Babcock’s company, Positive Science, containing two DVRs, and donned special glasses equipped with two tiny cameras—one pointed at the their right eye, the other at the observed scene. Each subject also wore a wide-brimmed hat to block sunlight from the cameras.

Pelz and Babcock collected nearly two terabytes of data and broke new ground tracking a large group outdoors in the sunlight for significant amounts of time. Rosen and imaging science doctoral student Brandon May collected another two terabytes worth of visual and aural data. They captured the scenery through high-resolution panoramic stills, hemispherical video and still photography and are currently preparing the images for presentation in semi-surround environments.

“Students will visit these presentations so the scientists can experiment with methods for recreating the field experience in a ‘virtual field trip’,” Rosen says. “Eye tracking and other analyses will reveal the extent to which the benefits of on-site geological training can be brought into the classroom.”

“Much of the captured imagery is really breathtaking,” Rosen continues. “Our goal was to bring back vistas that include the visual cues that geologists use out in the field to interpret geological history. With the latest high-resolution imaging combined with the mobile and computing capacity, even battery capacity—everything has come together to allow us to go out and capture these fabulous scenes from remote geological sites and present them back here as if you were actually there yourself.”