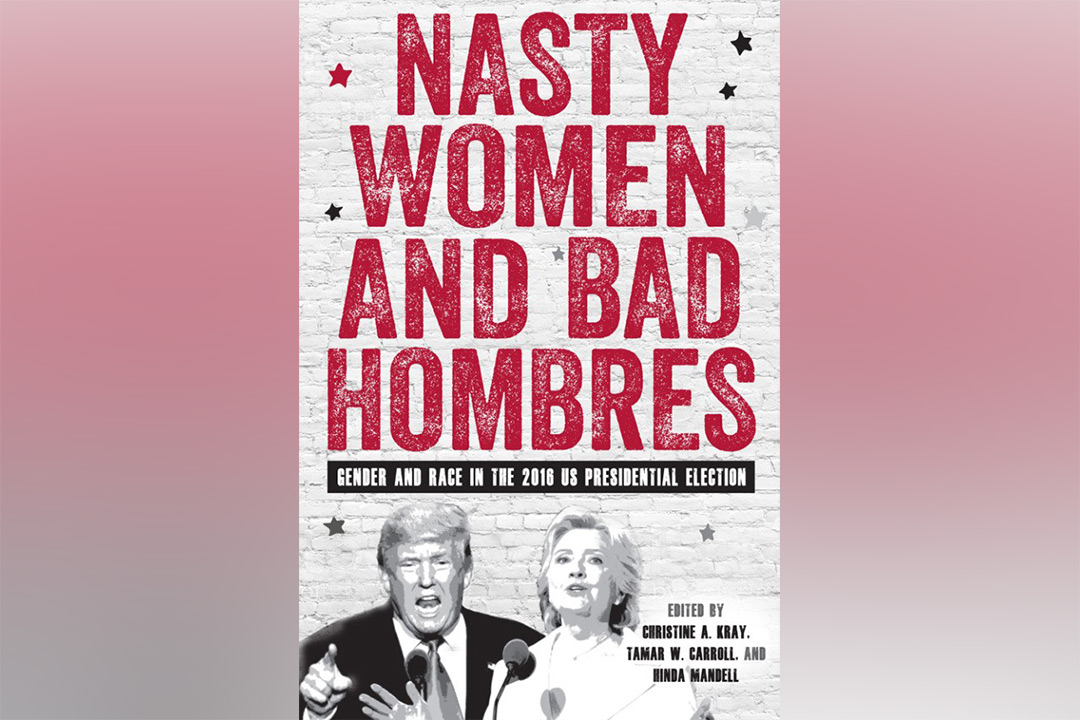 Although it’s been nearly two years since Donald Trump won the 2016 presidential election, what many thought was impossible remains a divisive outcome for millions of Americans.

A new book, Nasty Women and Bad Hombres: Gender and Race in the 2016 U.S. Presidential Election, edited by three Rochester Institute of Technology faculty members in the College of Liberal Arts, looks at how Donald Trump, Hillary Clinton and American voters invoked ideas of gender, race and history in that election.

The election was historic because Hillary Clinton was the first woman nominated by a major political party for the presidency, and as such, her campaign linked her with suffragist struggles. Trump’s “Make America Great Again” slogan, in combination with comments regarding trade, Muslims, immigration, crime and cities, sounded to some observers like “Make America White Again,” said Christine Kray, one of the book’s editors.

Kray said the idea for a book came during the run-up to the 2016 presidential election.

“There was a lot of attention being paid to Susan B. Anthony’s grave” in Mt. Hope Cemetery in Rochester, Kray said. On election day, thousands of people stood in line for hours to pay their respects to Anthony and leave their “I Voted” sticker on her gravestone. “People were excited about the notion we might have the first female president almost 100 years after women got the right to vote.”

She said gender played a larger role in 2016 than in any other presidential election.

“People were really paying attention to gender during the campaign, not only because Hillary Clinton was a woman. Donald Trump’s behavior drew attention to gender issues from the Access Hollywood tape to the playboy image that he had cultivated over the years,” she said.

Kray said the book has a section focused on conservative views, one chapter explaining why Christian evangelicals were so hostile to Clinton, a chapter discussing why some Republican women view some of Trump’s pre-election comments as “locker room talk,” and a chapter that maintains Clinton’s presidential bid was compromised because of her husband’s past sexual misconduct.

“The authors aim to be fair,” Kray said. “People might have their own opinions, but the authors try to analyze the issues and talk about the topics in a dispassionate tone.”

In the weeks leading up to and following the 2016 presidential election, Carroll said she was surprised of the extent of misogyny directed at Clinton, documented in a chapter in the book on election paraphernalia such as bumper stickers, T-shirts and internet memes.

“At the same time, it was inspiring to study the creativity and innovation of activists using social media and other tools to challenge misogyny and racism and to create progressive social change in their communities,” Carroll said.

Mandell said she hopes the book will help explain the country’s divisiveness and the hateful rhetoric that emerged during the presidential campaign.

“I hope that after reading this book, our readers will have a better understanding of how we got to this political moment, and how to make sense of it,” Mandell said. “The goal is for readers to situate the 2016 election within a historical arc by privileging our nation’s complicated relationship of gender, race and their intersections.”

Mandell said she hopes the book will be adopted in undergraduate courses in history, anthropology, sociology, criminal justice, political science, communication and gender and women’s studies. “There is also plenty of room for the lay reader. Because the outcome of the 2016 election was so personally felt in the U.S., we wanted essays that captured people’s lived experiences in a journalistic style.”

Nasty Women and Bad Hombres, published by University of Rochester Press, is available through the publisher’s website, in bookstores and through Amazon.