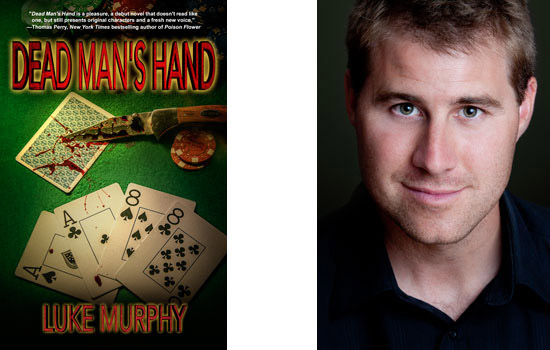 Former professional hockey player and RIT alumnus Luke Murphy is the author of Dead Man’s Hand, a crime thriller that has been described as a “fast, gritty ride,” by USA Today bestselling author Anne Frasier.

Becoming a published novelist was one of the farthest things from Luke Murphy’s mind as he skated up and down the Frank Ritter Memorial Ice Arena during his time as a player on the RIT men’s hockey team. Nearly a decade and a half after graduating from RIT, Murphy ’99 (marketing) has released his debut novel, Dead Man’s Hand.

The crime thriller tells the story of an aspiring professional football player named Calvin Watters who gets framed for murder in the fast-paced world of the Las Vegas gambling scene. The concept of a would-be professional athlete is a familiar topic for Murphy. Growing up, he was determined to become a professional hockey player—a goal that he would realize shortly after his graduation from RIT.

Murphy, who had a successful collegiate career under former RIT hockey head coach Eric Hoffberg, was invited to an NHL training camp with the Florida Panthers after graduating.

“As a hockey player, Luke was always creative; he had the ability to make plays and I tried to encourage his creativity,” Hoffberg says. “Luke was a big part of our success as a team and he has been supported by our team culture and by me to chase his dreams.”

He played several pre-season games with Florida before an injury put him on the sidelines and put his career in jeopardy. He was granted a second chance and received a minor league contract, and for the next six seasons he was moved around from team to team.

“I got to play in some great cities,” he says. “My hockey career was a fun ride, but it was one that had to end.” At age 29, Murphy decided to call it quits, citing a series of injuries and his desire to settle down with his wife as factors in his retirement.

“I think everyone who comes to RIT for hockey hopes to be able to play forever,” Hoffberg says. “The fact that Luke has been able to chase after his dreams both as a hockey player and as an author is an inspiration for us all.”

After moving back to his hometown of Shawville, Quebec, Murphy was faced with the difficult task of starting a new career. Armed with his hockey experience and a degree in marketing, he moved through a series of jobs varying from working in a mill, to promoting tourism for the Quebec government, to writing a sports column for a newspaper. He eventually went back to school and earned a degree in education from the University of Ottawa—he now teaches elementary school.

His inception as an author, however, would come years earlier, while he was still playing professional hockey. During a stint in Oklahoma City, Murphy suffered an extensive injury to his eye that required him to spend most of the season recovering. While he was waiting to get back on the ice, he spent some time helping his future wife, Melanie, with a creative short story assignment for a class that she was taking at LaSalle College in Montreal. Murphy helped her create some characters for the story, and his love for creative writing was born.

“I’d always had a passion for reading,” he explains. “I started writing just as a hobby, but then I thought, why not go all the way?”

Murphy says that he is not the kind of person to go only half way on things. He eventually hired an editor and an agent, and secured a publisher, Imajin Books.

He says that his time at RIT was beneficial in aiding his quest for a new career. “I’ve had to do a lot of work on my own, and I market myself every day,” he says. “My time at RIT, including the people I met and the experiences I had on and off the ice, built my character. It helped make me who I am today.”

Dead Man’s Hand is available at Barnes & Noble @ RIT and on Amazon.com in paperback and for the Kindle e-book reader. 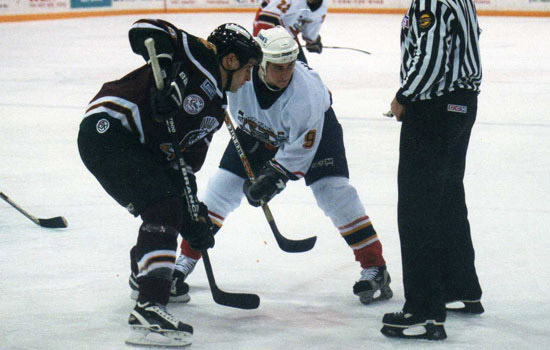