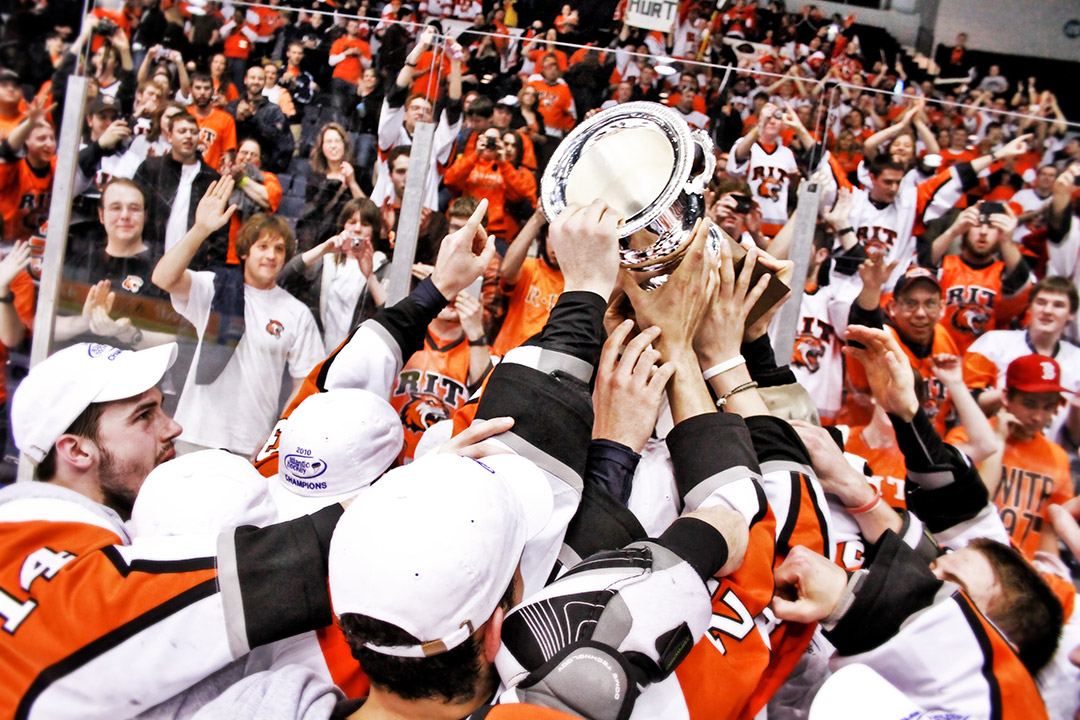 The men’s hockey team celebrates with Tiger fans after winning the Atlantic Hockey championship. The win propelled the Tigers to the NCAA tournament and eventually the Frozen Four in 2010.

The success of the RIT’s men’s hockey team was one of the most inspiring stories in college hockey in 2010. With their first-ever appearance at the NCAA Division I Frozen Four tournament in Detroit, the RIT Tigers captured the imagination of hockey fans across the nation with their underdog perseverance and play. 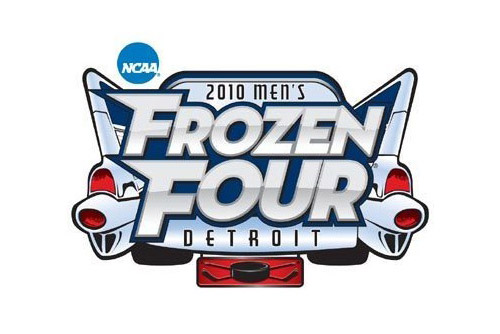 The Tigers created a frenzy on campus and ignited school spirit. Here was a team that offered no athletic scholarships, had only been Division I for five years, and yet the team was advancing in the tournament by beating top-ranked teams full of professional hockey draft picks. ESPN, Sports Illustrated, the New York Times, and USA Today all took notice. The Tigers eventually lost in the national semi-final game vs. the Wisconsin Badgers, a perennial powerhouse that has won six NCAA championships. But the Tigers had thrust themselves into the spotlight with college hockey’s elite programs.

As we celebrate the Frozen Four Tigers this Saturday (7:05 p.m. vs. Canisius), here’s a look back at the remarkable 2010 run. 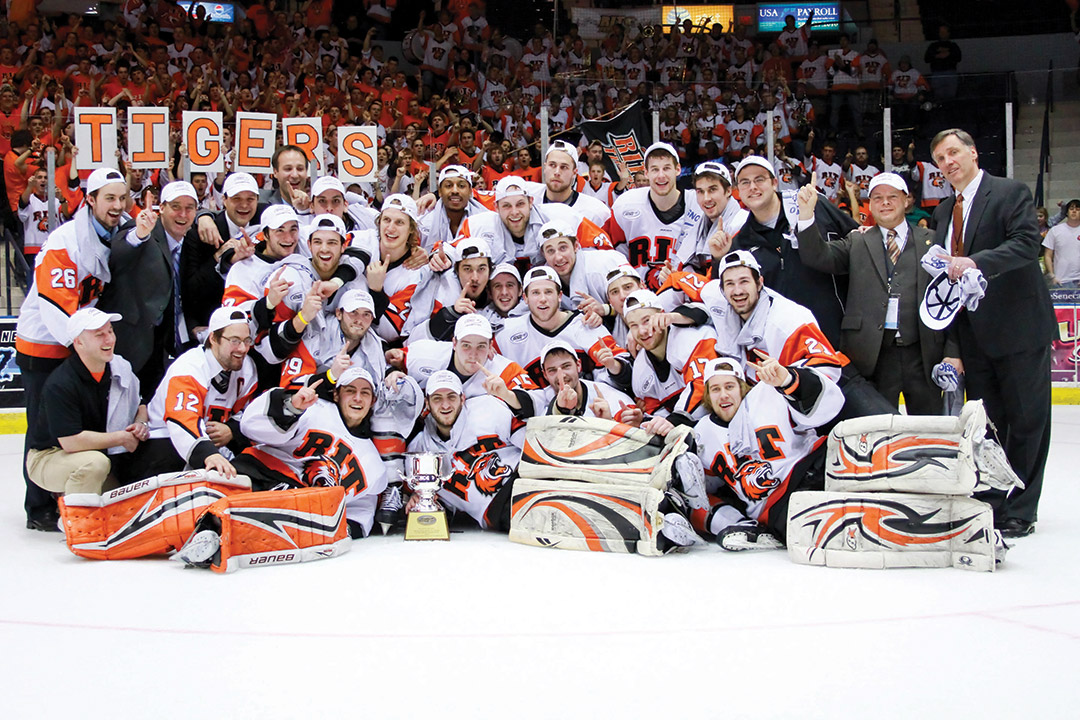 The 2010 Atlantic Hockey champions, who earned the right to play in the Division I NCAA tournament for the first time in RIT men’s hockey history.

Under the leadership of RIT President Al Simone, RIT took the step to become a DI program and completed its first season in 2006 at the higher level with a 9-24-2 record. But under the guidance of Head Coach Wayne Wilson, the team adjusted and won the Atlantic Hockey Association regular-season title the following year. In 2009, the Tigers again won the regular season title, but were upset in overtime in the conference championship, denying the team a chance to appear in the NCAA tournament.

In 2010, it all came together. The Tigers cruised to an Atlantic Hockey championship with a victory over Sacred Heart. Next up, a first-ever appearance at the DI NCAA tournament with 16 remaining teams. But it would mean facing the University of Denver—a program that has now won eight NCAA titles. The Pioneers in 2010 were ranked No. 1 in the nation for most of the season and had 14 NHL selections on its roster. RIT had none. The final score: RIT 2, Denver 1.

RIT routed New Hampshire the next night to win the East Regional and advance to the Frozen Four to be held at Ford Field in Detroit. The party was on. The team arrived back on campus with a police escort on the New York State Thruway, arriving at the Sentinel to thousands of adoring fans, including one of its biggest cheerleaders—President Bill Destler. 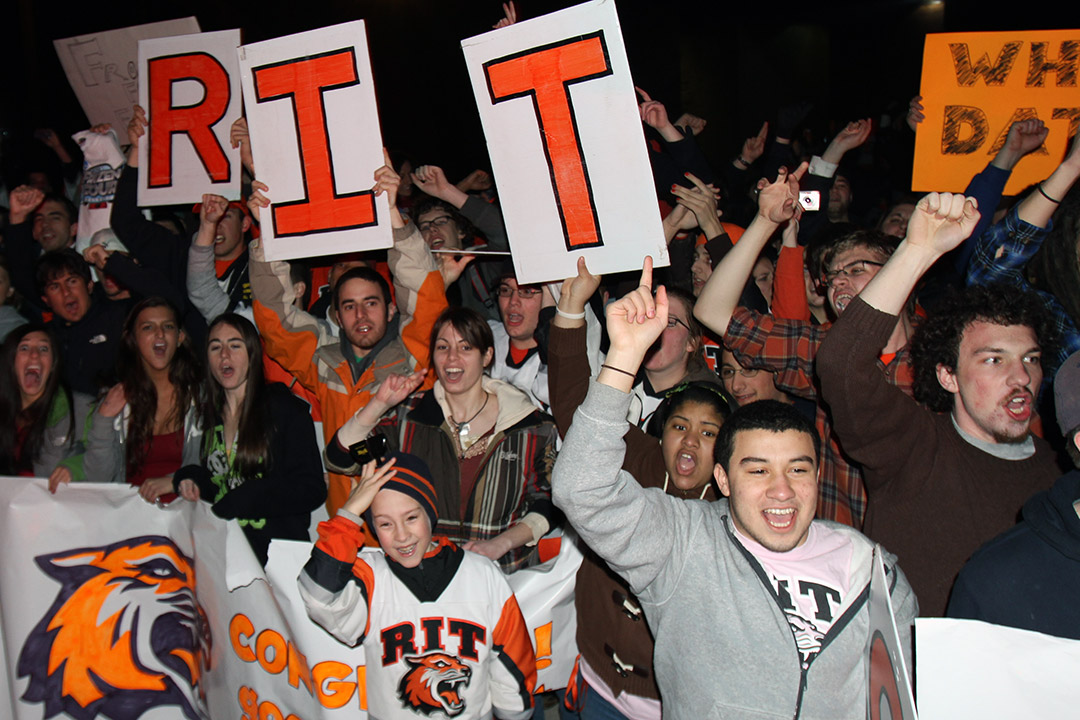 Thousands of RIT fans greeted the men’s hockey team at the Sentinel statue at 1 a.m. after the Tigers clinched a trip to the NCAA Frozen Four in 2010.

“This means everything to the RIT community,” Destler said at the time. “This has excited the community like nothing I can ever remember. The campus has been electrified.”

RIT was off to the Frozen Four with Wisconsin, Boston College (eventual champion) and Miami University riding the wave of a 12-game winning streak. Thousands of Tiger fans made the trip to Detroit’s Ford Field. The experience included:

“I think this is typical of what happens nationwide when a university has a high-profile sport or athletics program and something big happens,” Lou Spiotti, executive director of athletics, said in 2010. “People want to be on a campus where there’s things happening, where there’s pride, there’s electricity, and it pulls people together.” 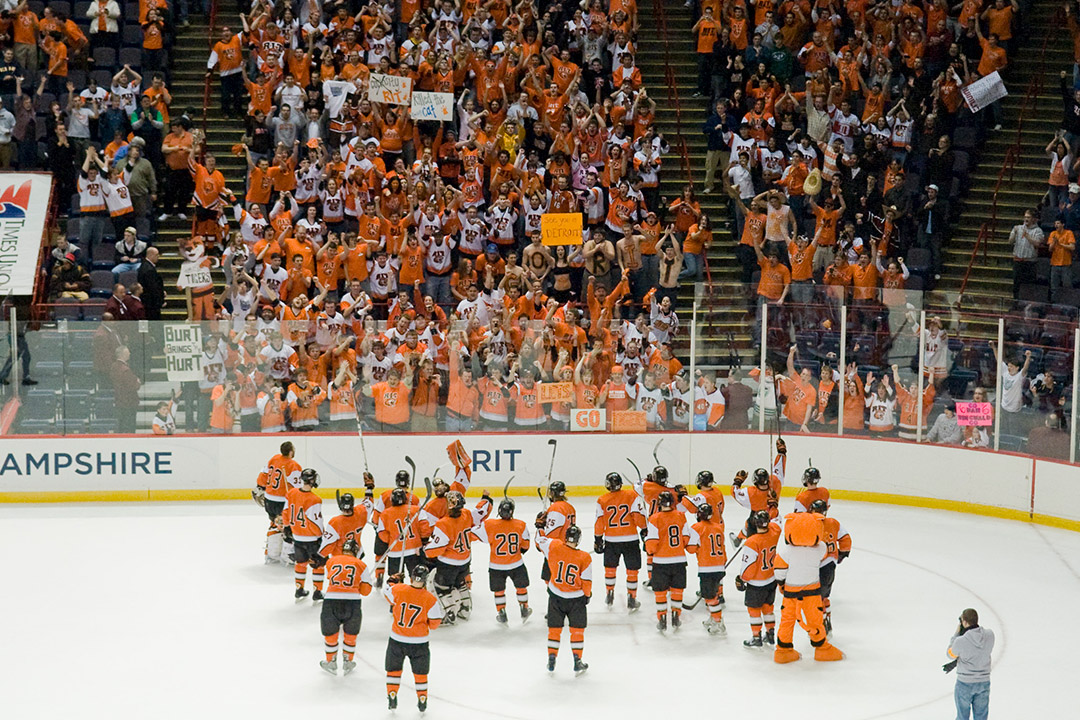 The men’s hockey team salutes Tiger fans in Albany after winning the NCAA East Regional and advancing the Frozen Four. RIT upset the University of Denver and the University of New Hampshire to advance in 2010.

After the Wisconsin loss, the Detroit Free Press had this to say: “Somebody else will win the national championship, but the RIT Tigers earned something different, and almost as cool: a feeling that they belonged with the big boys.”

The accolades for the Tigers continued to pour in after the Frozen Four run. Wilson was named Division I men’s hockey national coach of the year; forward Mark Cornacchia received an NCAA award for the player at the Frozen Four with the highest cumulative grade point average (3.85); and several Tigers signed professional contracts. This included defenseman Chris Tanev, who signed with the NHL’s Vancouver Canucks where he continues to play today and serves as an alternate captain.

The Frozen Four run brought momentum to the rest of the RIT athletics program. The women’s hockey team won the DIII national championship in 2012 and immediately moved to Division I the following season. RIT’s remaining DIII teams joined the Liberty League in the 2011-2012 season. And the team’s popularity meant it was time to leave a standing-room-only packed Ritter Arena, and build new. The Gene Polisenni Center opened in 2014 with fan capacity of 4,300. 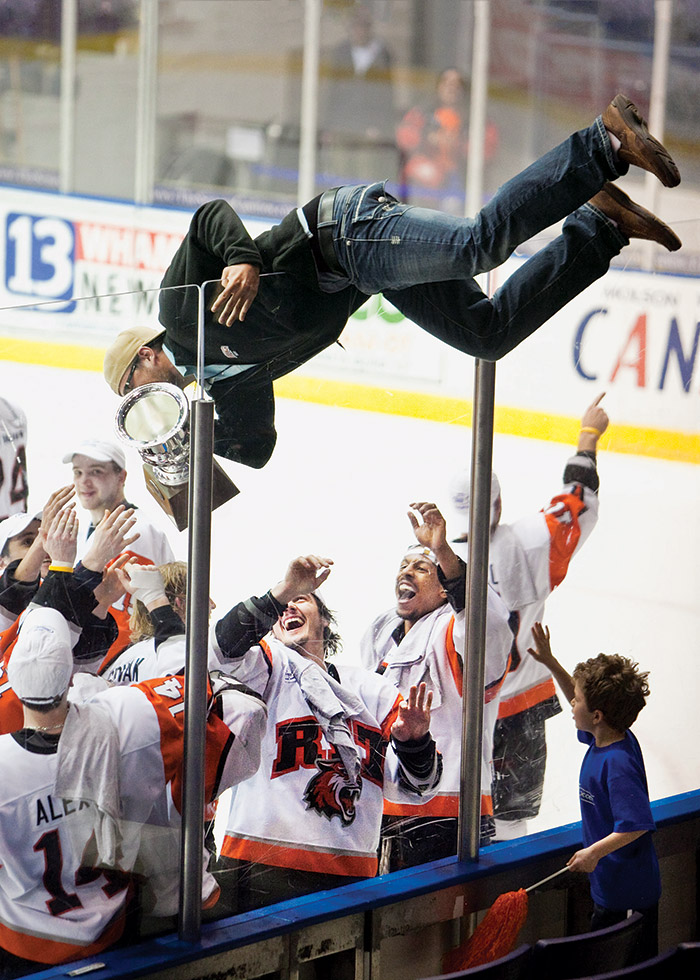 Injured RIT Tiger Riley Clark climbs over the glass at Blue Cross Arena to reach his teammates following the team’s first Atlantic Hockey championship, which sprung RIT on its Frozen Four run. Photo by Daniel Wodecki, which originally appeared on the cover of Reporter magazine.

What: The RIT men’s hockey team who played in the 2010 NCAA Frozen Four will be honored on Saturday, Jan. 25.

Women’s game: The 2010 team will attend the women’s hockey game at 2 p.m. Saturday in the Gene Polisseni Center.

Fan Fest: Members of the 2010 team will be in the Gene Polisseni Center lobby at 5:30 p.m. Saturday signing autographs. T-shirts will be handed out to fans on a first-come, first-serve bases. Players cards will also be handed out.

Men’s hockey game: The 2010 team will be featured in a ceremonial puck drop prior to the men’s game vs. Canisius at 7 p.m. Saturday.