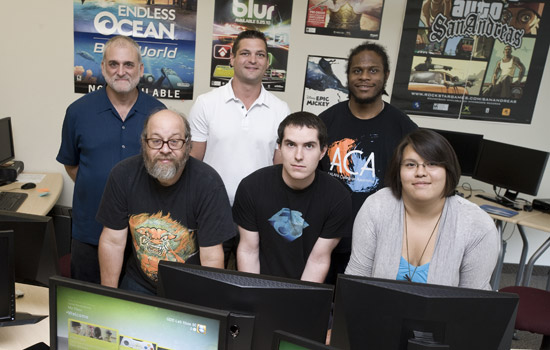 RIT and St. John Fisher College have teamed up to develop a computer game that enhances the experience of therapy for young people with anxiety. Team members include, back to front and from left to right, Dr. Laurence Sugarman, Robert Rice, Kenneth Stewart, Stephen Jacobs, John McDonald and Ivy Ngo.

Researchers say tuition and pressure to achieve top grades are just a few of the reasons that today’s young people suffer from increased anxiety and seek therapy.

In order to enhance the experience of therapy, a team of students and faculty from Rochester Institute of Technology and St. John Fisher College is designing and building a groundbreaking computer game to help young people improve their everyday skills in self-control.

“The use of physiological controllers in a personalized game platform allows us to help our patients help themselves in a new way,” says Dr. Laurence Sugarman, director of the Center for Applied Psychophysiology and Self-Regulation in RIT’s College of Health Sciences and Technology.

The game starts with assessments that help the players learn about and describe their anxieties and repetitive behavior by turning the players into game characters. Using physiological sensors that are built into the game hardware, players then learn how to monitor the physiological manifestations of anxiety and stress, or what is commonly called their fight or flight response. Finally, the players use those same sensors as controllers to move themselves through the game by monitoring and controlling their characters and the stress responses they represent.

“The game was inspired by clients and will involve client input and feedback throughout the development process,” says Rice.

Sugarman says games involving physiological health are newly emerging, yet none combines aspects of assessment, cognitive behavioral therapy and biofeedback in a creative and customizable setting. This game allows a unique extension of the therapist’s role that provides a fun, engaging platform for therapeutic change, while collecting data on psychophysiological change.

The development team expects to use the prototype for clinical trials this fall, prior to developing it for a broader use.