4,150-seat arena will be home to Division I men’s and women’s Tiger hockey; community asset 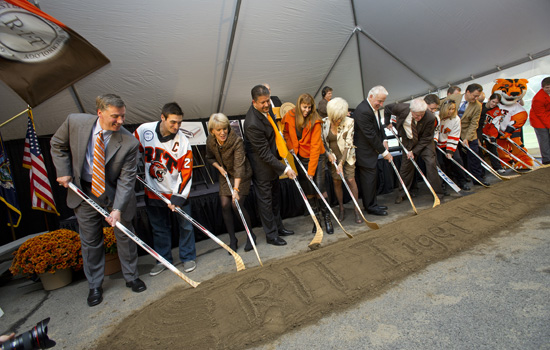 A new athletic venue and multi-purpose facility will soon rise on the RIT landscape. University leaders and dignitaries broke ground Oct. 19 on the 4,150-seat Gene Polisseni Center on the south side of campus. Construction will continue for two years with an opening planned for the 2014­­­-2015 season for the Division I men’s and women’s hockey teams.

“The popularity of our hockey teams has grown so much that we can’t handle ticket demand from our fans,” says RIT President Bill Destler. “The Gene Polisseni Center will allow us to accommodate our fans and attract prominent teams from across the nation to play the Tigers on campus. The arena will also be a wonderful venue for the Rochester community to converge on the RIT campus.”

The Gene Polisseni Center will nearly double the current capacity of 2,100 spectators at Ritter Arena and provide modern amenities that will significantly enhance the game experience for Tigers fans. BBB Architects, a world-renowned architectural firm based in Toronto, created the arena’s design. The firm specializes in sports and entertainment venues, serving as architects for the Air Canada Centre in Toronto, General Motors Place in Vancouver and the current redesign of Madison Square Garden in New York City. LeChase Construction Services, based in Rochester, has been selected to build the facility and manage its construction.

The Gene Polisseni Center site is directly south of the Student Alumni Union and adjacent to the existing athletic turf field. The location creates an “athletics spine” running north to south between the residence halls and the university’s academic corridor. Additional sporting and student recreation facilities within close proximity to the new arena include Clark Gymnasium, Gordon Field House and Activities Center, RIT Stadium, the turf field, tennis courts and the Frank Ritter Arena, which will continue to remain open as an ice skating venue.

“Hockey has been a unifying force at RIT, so the location will be at the heart of campus,” says Mary-Beth Cooper, senior vice president of student affairs. “Enhancing the fan experience is among the key priorities in the design of the new arena.”

“This is a huge step for both of our hockey programs,” adds Lou Spiotti, executive director of intercollegiate athletics. “It paves the way for more team progress, stronger campus spirit and student engagement and enhanced connections with our alumni and the greater Rochester community.”

More than $9 million of the targeted $15 million fundraising goal has been raised as a result of Tiger Power Play — The Campaign for RIT Hockey. The multi-purpose facility will cost about $35 million. RIT is developing a business plan for the venue’s operation intended to cover the remaining expenses. A $4.5 million partnership between the Polisseni Foundation and RIT trustee B. Thomas Golisano, founder and chairman of Paychex Inc., resulted in the naming of the facility as the Gene Polisseni Center.

The future arena will be LEED (Leadership in Energy and Environmental Design) certified by the U.S. Green Building Council.

For a quick look at key components of the visit the Gene Polisseni Center: Fast Facts article webpage. 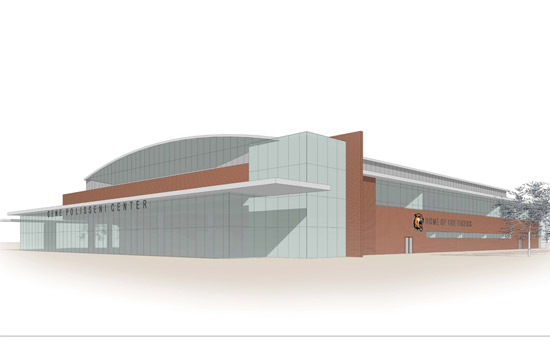 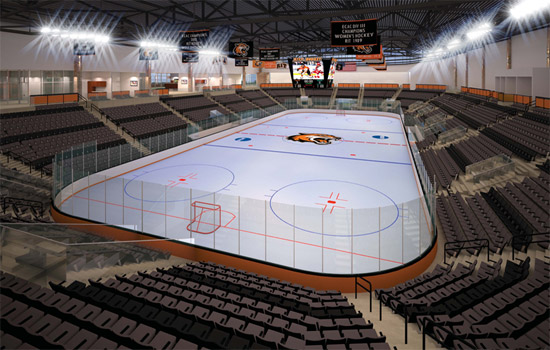 Rendering of inside of Gene Polisseni Center BBB Architects