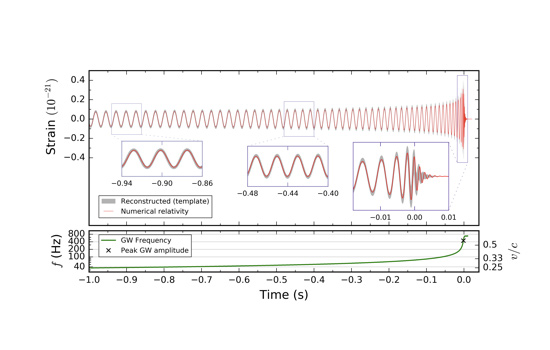 A reconstruction of the gravitational wave signal in the top panel compares observations from the LIGO detector in Livingston, La., in gray with a signal calculated from a numerical relativity simulation, in red. The time is counting down in seconds leading to the merger of the two black holes at zero. RIT researchers contributed to the simulations that reproduced the event and determined properties of the final black hole. The lower panel shows how the frequency of the gravitational waves changes with time and increases as the black holes spiral together. The black cross marks the point where the amplitude of the signal was largest and is approximately the time of the merger. The image was adapted from figure five in the upcoming LIGO paper in Physical Review Letters.

Gravitational waves from a second pair of colliding black holes has validated the landmark discovery from earlier this year that confirmed Einstein’s general theory of relativity. Rochester Institute of Technology scientists contributed to the initial breakthrough and to the second discovery announced Wednesday by the Laser Interferometer Gravitational-wave Observatory.

The second gravitational wave was observed by the LIGO Scientific Collaboration and the Virgo Collaboration on Dec. 26, 2015, toward the end of the first science run of the Advanced LIGO detectors. The findings, which will appear in the journal Physical Review Letters, validate the new field of gravitational wave astronomy and reveal diversity of size and spin among black holes in the universe.

“This detection corroborates our previous one,” said Richard O’Shaughnessy, assistant professor in RIT’s School of Mathematical Sciences and a member of RIT’s LIGO group. “We can now demonstrate with complete confidence that it wasn’t a fluke because we saw something again. And, critically, we’re going to see sources that are not just like the first sources but include a wide range.”

The landmark discovery occurred on Sept. 14, 2015, and was publicly announced on Feb. 11. The scientific breakthrough confirmed predictions in Albert Einstein’s general theory of relativity and involved the merger of black holes that weighed 29 and 36 solar masses.

The LIGO detectors captured the final seconds before the landmark merger in September. This time, LIGO observed a longer, murkier signal from the smaller masses, including the last 27 orbits of the black holes before the merger. The signal is three times longer than the previous one but quieter and not as visible in the data.

“This signal isn’t obvious,” John Whelan, principal investigator of RIT’s group in the LIGO Scientific Collaboration. “We had to use a more sophisticated technique to find it called matched filtering.”

Critical parts of the matched filtering strategy used to discover this new signal were prototyped in a project co-led, under Whelan’s supervision, by then-RIT post-doctoral researcher Satya Mohapatra, now part of the Massachusetts Institute of Technology’s LIGO group.

“We know what inspirals look like, and we’ll search for systems of different masses and we’ll see if one of them fits well,” said Whelan, associate professor in RIT’s School of Mathematical Sciences and graduate program coordinator of RIT’s astrophysical sciences and technology program. “When you change the mass of binary black holes, you change the frequency at which these things happen and that changes which parts of the wave form are most important.”

This time, LIGO captured earlier stages of the “chirp” signal. The black holes were less massive than those in the landmark Sept. 14 merger and radiated at a higher frequency upon impact. The frequency fell within LIGO’s sensitivity band and resulted in a longer signal.

Besides being smaller, one black hole is nearly twice the size of its companion. Because the larger, spinning body was not perpendicular to the orbital plane, the orbit wobbled, or precessed, and produced a complicated gravitational wave signal.

Carlos Lousto, professor in RIT’s School of Mathematical Sciences, and James Healy, postdoctoral researcher in the Center for Computational Relativity and Gravitation, produced numerical simulations to track the spin-effect of the oddly aligned black hole and helped identify the astrophysical properties of the massive black hole formed at the end.

“We also contributed to the formula for determining the final properties of the merged black hole and specific simulations to reproduce the precessing event, which is a project we have worked on for the last few years,” said Lousto, an American Physical Society Fellow.

The first gravitational wave signal took 10 days to simulate on a supercomputer, while the more complicated signal in the second event took two months to produce. Lousto used the techniques from the 2005 landmark research led by Manuela Campanelli, director of the RIT’s Center for Computational Relativity and Gravitation and a member of the LIGO Scientific Collaboration.

The Center for Computational Relativity and Gravitation is a research hub in the College of Science and an RIT Research Center of Excellence. Campanelli has positioned the center to become a leader in gravitational wave and multimessenger astronomy, which combines information from gravitational waves and the electromagnetic spectrum. Under her leadership, RIT is supporting a gravitational wave astronomy research initiative at the center as part of new strategic investments designed to promote areas of interdisciplinary, frontier research at the university.

“We are working to push the frontiers in multi-messenger astronomy and will pursue opportunities to play a role in developing next-generation gravitational wave detectors,” said Campanelli, professor in RIT’s School of Mathematical Sciences and an American Physical Society Fellow. “This is an exciting new era for astrophysics and for science in general that will be remembered in history.”

Several RIT scientists and students in the Center for Computational Relativity and Gravitation, are authors on the LIGO paper that will appear in the journal, Physical Review Letters. They are John Whelan, Richard O’Shaughnessy, Carlos Lousto, James Healy, post-doctoral research fellow, graduate students in RIT’s astrophysical sciences and technology program Jacob Lange and Yuanhao Zhang, and physics undergraduates Monica Rizzo, a second-year student, and Jackson Henry, who recently graduated.

The LIGO Observatories are funded by the National Science Foundation and were conceived, built and are operated by Caltech and MIT. The observatory consists of twin detectors located in Livingston, La., and Hanford, Wash. The LIGO Scientific Collaboration includes the GEO Collaboration and the Australian Consortium for Interferometric Gravitational Astronomy.

Advanced LIGO’s next data-taking run will begin in the fall. Further improvements in detector sensitivity could increase the volume of the universe sampled by an additional one-and-a-half to two times. The Virgo detector in Italy is expected to join in the latter half of Advanced LIGO’s second observing run.