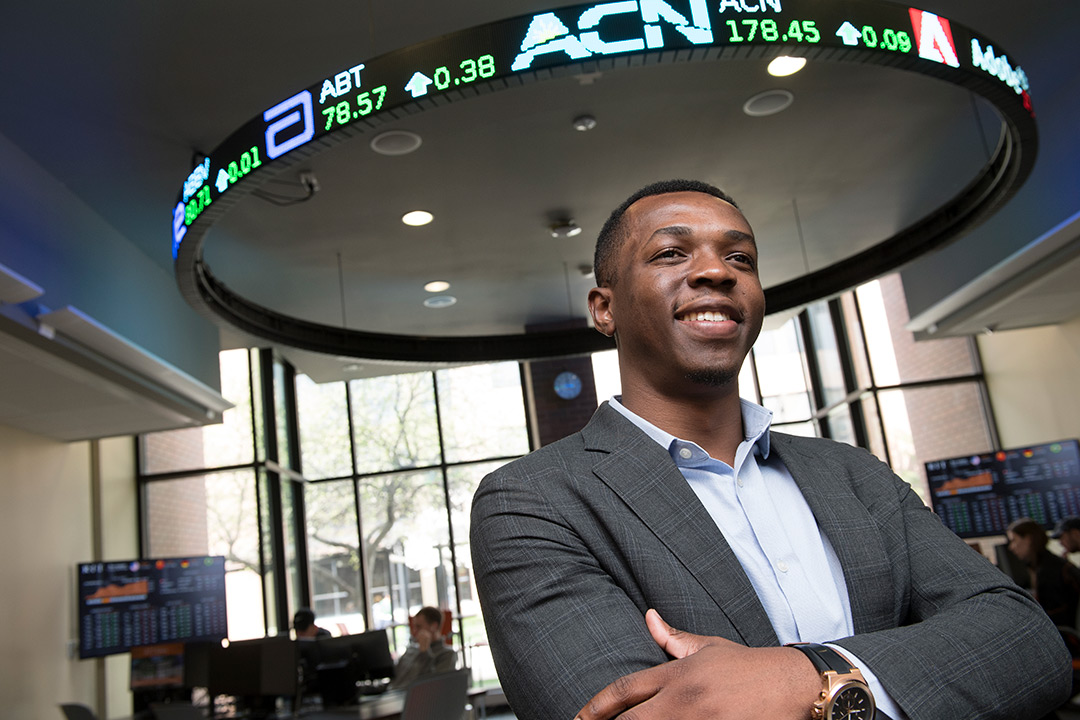 Austin Okwudili, a 2019 graduate of Saunders College of Business, will be a project manager at On The Mark, a utility locating service company in Rochester.

When RIT student Austin Obiora Okwudili accepts his diploma on May 11 in front of family and friends, he says that he will fondly remember his late father and the legacy he left behind—always encouraging his children to work hard, be positive, persevere and, most importantly, keep the faith.

A native of Anambra State in Nigeria, Okwudili will earn his MBA from Saunders College of Business. He received his undergraduate degree in computer science from the American University of Nigeria and worked for several years as the business development and IT manager at his father’s furniture making and real estate business in Nigeria.

“My father wasn’t formally educated, but he always worked hard and saw opportunities everywhere,” said Okwudili. “He was good at his craft and he collaborated with other firms around the world, including in China and Italy, to grow the business. But through it all, all he ever wanted was for his children to be educated and to be better than he was.”

After a brief stint with an IT firm in Nigeria that allowed him to use his computer science skills, Okwudili decided to apply to business school to boost his business acumen and build leadership skills, keeping on the dream to fulfill his father’s wish for his son to be a lifelong learner. Okwudili’s plan was to study in the United States “because the opportunities in the U.S. are endless,” and return to Nigeria to help his mother run the family business. He applied and was accepted to RIT in 2016.

“I had seen New York in the movies, but I was shocked when I arrived at the Rochester airport,” he laughed. “This wasn’t the New York that I thought it was. But now, this is my home.”

A co-op assignment as a data scientist with The Hershey Co. in Pennsylvania helped optimize the business process for the company. He wrote a program designed to predict when the price of peanuts would rise and worked with a group of fellow interns to use the company’s social media accounts to increase revenue. “My co-op ended before the company fully implemented my program, but it had the potential to save Hershey’s more than $8 million. I worked with so many great people at that company and was able to present my findings to the company’s top leaders.”

At Hershey’s, Okwudili led the interns as an ambassador for the program, which included planning social activities and helping the interns acclimate to their work environment. He was also a source of encouragement for his colleagues.

“I have always enjoyed helping people, even as far back as elementary school and high school,” he said. “Nigeria has a very high drop-out rate and I did what I could to motivate students to stay in school by tutoring and mentoring. And, I enjoyed my role as a mentor for other interns at Hershey’s.”

A second co-op as an IT manager for a Rochester firm has led to permanent employment. After graduation, Okwudili will be a project manager for On The Mark, a utility locating service company.

“I’m excited to grow with the company and rise up the corporate ladder,” he said. “There are about 50 employees now, but it’s growing quickly and I predict that it will double within the next few years.”

Okwudili credits his good fortune to Saunders’ intense focus on using technology to solve problems. He said that he considers the other students to be his colleagues and the professors are always helpful. “The education at Saunders College allowed me to experience business from a high level, while still getting an in-depth look at basic business operations. I learned how to understand the concepts and adapt and work quickly. I think being inquisitive and having an open mind to learning from others are key components to my success.”

Throughout his career at RIT, Okwudili also took advantage of opportunities offered through the Simone Center for Entrepreneurship and Innovation, enrolling in an entrepreneurship class and participating in two Tiger Tank competitions with two different start-up ideas. He was actively involved in the college and remained a graduate student ambassador for the business school throughout his MBA program. He was also vice president of alumni relations for Delta Sigma Pi business fraternity and was vice president of the Saunders Multicultural Business Association.

“A lot of my inspiration comes from my mother and the rest of my family,” he added. “My mother barely made it through high school and when my father died, she had to run the business. Today, she is the company’s president and chairman of the board. I was taught to remain strong and trust in my faith. When I see someone struggling, I always encourage them to never give up. I believe that everything will always work out the way it’s supposed to.”