Hockey arena to be named the Gene Polisseni Center 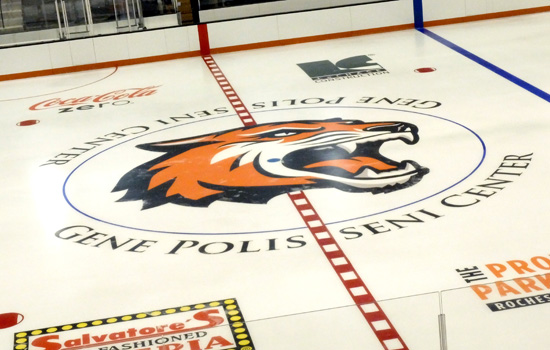 The legacy of a prominent businessman, philanthropist and avid sports fan is now intertwined with the future of hockey at Rochester Institute of Technology. Today, the university introduced the identity of its forthcoming arena as the Gene Polisseni Center.

The announcement came during the first intermission of the Atlantic Hockey Association contest at Frank Ritter Arena between the RIT Tigers and the Air Force Falcons. RIT President Bill Destler declared that naming of the facility results from a $4.5 million partnership between the Polisseni Foundation and B. Thomas Golisano, founder and chairman of Paychex Inc. and an RIT trustee.

Gene Polisseni, who founded the Polisseni Foundation with his wife, Wanda, served as vice president of marketing at Paychex until his passing in 2001. Since that time, the foundation has focused its support toward improving quality-of-life issues related to education, human services and civic improvement across the Rochester region.

The $4.5 million commitment becomes the most recent and most significant gift in support of Tiger Power Play—The Campaign for RIT Hockey, which aims to raise $15 million of the total $30 million cost of construction for the new arena.

“My father believed that sports were key to building a strong sense of community,” says Gary Polisseni, Polisseni Foundation board member. “The success of RIT’s hockey program has become a unifying force for the Rochester community, and the Polisseni Foundation is proud to enhance that connection through its commitment to help build the Gene Polisseni Center.”

Golisano, who spent eight years as owner the National Hockey League’s Buffalo Sabres, remembers his friend and colleague’s passion for hockey. Polisseni organized many youth and adult amateur leagues throughout the area, so Golisano calls his backing of the Gene Polisseni Center a fitting tribute.

“I remember afternoons when Gene would suit up in his Sabres gear in preparation for game night in Buffalo,” recalls Golisano. “He understood firsthand how sports could make a community feel about itself, and I am proud to help create a legacy dedicated to Gene’s passion for competition and camaraderie here at RIT.”

“This is an extraordinary partnership that provides a giant step toward our goal of creating the highest quality game-day experience for our players, students and the fans of RIT hockey throughout the local community,” Destler says. “The support of the Polisseni Foundation and our long-time benefactor and friend Tom Golisano heightens our resolve to make that a reality.”

Tiger Power Play—The Campaign for RIT Hockey kicked off in November 2010 to engage alumni and other supporters of RIT men’s and women’s hockey in fundraising for a new on-campus arena. The Polisseni-Golisano partnership provides the third commitment of $1 million or more to the campaign since that launch.

The Gene Polisseni Center will feature state-of-the-art amenities and approximately double the seating capacity of Ritter Arena, which accommodates 2,100 fans.

“RIT enjoys a tradition of hockey excellence,” Destler explains, “including national championships at the Division II and Division III levels and our 2010 appearance in the NCAA Division I Frozen Four tournament. We are now in need of a facility that will heighten our status among the elite programs in collegiate hockey.”

Construction of the Gene Polisseni Center is expected to cost $30 million to $35 million, and RIT has developed a business model for the facility’s operation that the university expects will cover the remaining expenses. While it will serve primarily as a venue for ice hockey, the arena will become a multi-purpose facility.

A timeframe for the start of construction has not yet been identified.