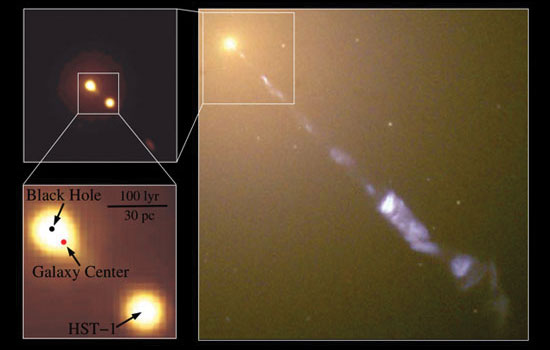 Hubble Space Telescope Images of M87. At right, a large-scale image taken with the Wide-Field/Planetary Camera-2 from 1998 (NASA and the Hubble Heritage Team (STScI/AURA), J. A. Biretta, W. B. Sparks, F. D. Macchetto, E. S. Perlman). The two images at left show an image taken in 2006 with the Advanced Camera for Surveys’ High Resolution Channel. The position of the supermassive black hole is indicated by the black dot in the lower left panel, and a knot in the jet (HST-1), which was flaring in 2006, is also indicated on this panel. The red dot indicates the center of the galaxy’s light distribution, which is offset from the position of the black hole by 22 +/- 3 light years.

The discovery, made through observations of the Hubble Space Telescope data, will help scientists refine their understanding of how galaxies are made and how they evolve.

Messier 87 is a massive elliptical galaxy that, at 60 million light years from Earth, is one of our most impressive and closest galactic neighbors. It is known for its brilliant and dense nebulae of stars and a distinctive jet of sub-atomic particles that is propelled from its active center.

The team has found that the supermassive black hole thought to be at the center of M87 has been is displaced. The most likely cause is a previous merger between two older, less massive black holes, but the displacement may also be due to the propulsive energy of M87’s iconic jet.

“The M87 jet may have pushed the supermassive black hole away from the galaxy center,” says lead author Daniel Batcheldor, assistant professor of physics at Florida Institute of Technology and former research scientist at RIT.

The study of M87 is part of a wider Hubble Space Telescope project directed by Andrew Robinson, professor of physics at RIT. “What may well be the most interesting thing about this work is the possibility that what we found is a signpost of a black hole merger, which is of interest to people looking for gravitational waves and for people modeling these systems as a demonstration that black holes really do merge,” says Robinson. “The theoretical prediction is that when two black holes merge, the newly combined black hole receives a ‘kick’ due to the emission of gravitational waves, which can displace it from the center of the galaxy.”

David Merritt, professor of physics at RIT, adds: “Once kicked, a supermassive black hole can take millions or billions of years to return to rest, especially at the center of a large, diffuse galaxy such as M87. So searching for displacements is an effective way to constrain the merger history of galaxies.”

Many galaxies have similar properties to M87, so it is likely that supermassive black holes are commonly offset from their host galaxy centers. David Axon, head of the School of Mathematical and Physical Sciences at the University of Sussex, says: “In current galaxy formation scenarios galaxies are thought to be assembled by a process of merging. We should therefore expect that binary black holes and post coalescence recoiling black holes, like that in M87, are very common in the cosmos.”

Earth’s own galaxy is predicted to merge with the Andromeda galaxy, which could then result in a similar wandering SMBH at the heart of the new galaxy–in about 3 billion years.

“The result of that merger will likely be an active elliptical galaxy, similar to M87,” says Eric Perlman, associate professor of physics and space sciences at Florida Institute of Technology. “Both our galaxy and Andromeda have supermassive black holes in their centers, so our result suggests that after the merger, the supermassive black holes may wander in the galaxy’s nucleus for billions of years.”

The research was presented at the American Astronomical Society Conference May 25 in Miami and will be published as “A Displaced Supermassive Black Hole in M87,” by D. Batcheldor, E. Perlman (Florida Institute of Technology); A. Robinson, D. Merritt (Rochester Institute of Technology) and D. Axon, University of Sussex, Astrophysical Journal Letters.

About RIT: Rochester Institute of Technology is internationally recognized for academic leadership in computing, engineering, imaging technology, and fine and applied arts, in addition to unparalleled support services for students with hearing loss. Nearly 16,800 full- and part-time students are enrolled in more than 200 career-oriented and professional programs at RIT, and its cooperative education program is one of the oldest and largest in the nation.

For two decades, U.S. News & World Report has ranked RIT among the nation’s leading comprehensive universities. RIT is featured in The Princeton Review’s 2010 edition of The Best 371 Colleges and in Barron’s Best Buys in Education. The Chronicle of Higher Education recognizes RIT as a “Great College to Work For.”