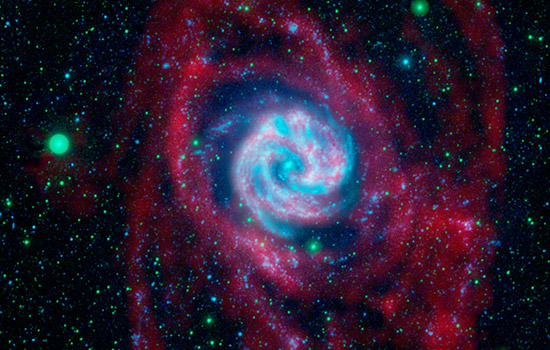 RIT researchers propose that the outer gas disk of spiral galaxies could be teeming with black holes that emit gravitational waves as they collide. Shown here is the Southern Pinwheel galaxy seen in ultraviolet light and radio wavelengths. The radio data, colored here in red, reveal the boondocks of the galaxy where orbiting black holes might exist.

The outskirts of spiral galaxies like our own could be crowded with colliding black holes of massive proportions and a prime location for scientists hunting the sources of gravitational waves, said researchers at Rochester Institute of Technology in an upcoming paper in Astrophysical Journal Letters.

The RIT study identifies an overlooked region that may prove to be rife with orbiting black holes and the origin of gravitational-wave chirps heard by observatories in the United States and Italy. Identifying the host galaxies of merging massive black holes could help explain how orbiting pairs of black holes form.

Conditions favorable for black-hole mergers exist in the outer gas disks of big spiral galaxies, according to Sukanya Chakrabarti, assistant professor of physics at RIT and lead author of “The Contribution of Outer HI Disks to the Merging Binary Black Hole Populations,” available online at https://arxiv.org/abs/1710.09407.

Until now, small satellite or dwarf galaxies were thought to have the most suitable environment for hosting black-hole populations: a sparse population of stars, unpolluted with heavy metals like iron, gold and platinum—elements spewed in supernovae explosions— and inefficient winds that leave massive stars intact.

Chakrabarti realized the edges of galaxies like the Milky Wavy have similar environments to dwarf galaxies but with a major advantage— big galaxies are easier to find.

“The metal content in the outer disks of spiral galaxies is also quite low and should be rife with black holes in this large area,” Chakrabarti said.

A co-author on the paper, Richard O’Shaughnessy, assistant professor of mathematical sciences at RIT and a member of the LIGO Scientific Collaboration, said: “This study shows that, when predicting or interpreting observations of black holes, we need to account not only for differences between different types of galaxies but also the range of environments that occur inside of them.”

A deeper understanding of the universe is possible now that scientists can combine gravitational wave astronomy with traditional measurements of bands of light. Existing research shows that even black holes, which are too dense for light to escape, have a gravitational wave and an optical counterpart, remnants of matter from the stellar collapse from which they formed.

“If you can see the light from a black-hole merger, you can pinpoint where it is in the sky,” Chakrabarti said. “Then you can infer the parameters that drive the life cycle of the universe as a whole and that’s the holy grail for cosmology. The reason this is important is because gravitational waves give you a completely independent way of doing it so it doesn’t rely on astrophysical approximations.”

Chakrabarti and O’Shaughnessy are members of RIT’s Center for Computational Relativity and Gravitation. The center is a hub of multimessenger astronomy research and home to the Frontiers in Gravitational Wave Astronomy initiative, an RIT signature research area.