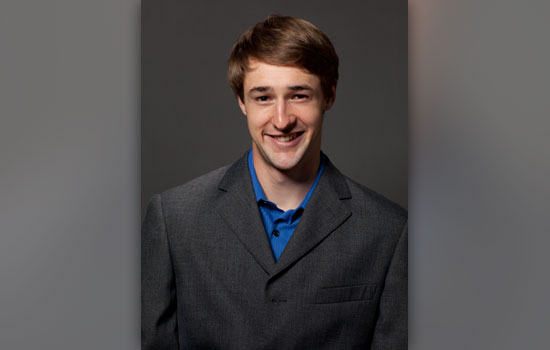 The students living on the residence hall floor where Kevin Dickey serves as a resident advisor have accused him of being an insomniac. That might be because he spends the majority of his time devoted to his intensive studies in imaging science.

Academics have certainly been Dickey’s main focus at RIT. He is a recipient of this year’s Greater Research Opportunities undergraduate fellowship. Sponsored by the EPA, this award enhances and supports environmental education and research for undergraduate students.

Recipients of the fellowship can attend two scientific conferences of their choosing. Dickey, who is a third-year imaging science student, hopes to be able to go to a conference hosted by SPIE, an international not-for-profit society for optics and photonics.

“Kevin is a student who is great at his science and has all the tools necessary to make effective use of everything he learns,” says Carl Salvaggio, professor and undergraduate program and minor coordinator in the Chester F. Carlson Center for Imaging Science. “There is little that he won't be able to accomplish in his career.”

As part of the fellowship, students also participate in a 12-week summer internship at an EPA research facility. Dickey, whose scientific interests focus on environmental applications of remote sensing, hopes to conduct his internship in Alaska or Hawaii.

“I’d like to be an end-to-end user of a remote sensing system. This means having the technical background to utilize and improve current systems, combined with environmental knowledge to be able to make a substantial impact,” he says.

“The GRO award from the EPA is a great program,” says Salvaggio. “It provides Kevin the opportunity to gain valuable experience to help him practice his trade and to better guide what he will study when he returns to campus.”

Dickey has already attained a great deal of real-world experience through multiple projects during his undergraduate studies. He participated in the inaugural Freshman Imaging Project, which assigned the task of creating an imaging device—an ambitious project typical of a senior design class—to first-year students.

He feels that the project, which results in the creation of a working prototype, is a good way for freshmen to get their feet wet. “The only limitation that exists for first-year students is their willingness to commit,” he says.

Last summer, he worked on co-op with United Technology Corporation’s ISR Systems group, where he wrote software to perform statistical analysis of large data sets. He says that it was a valuable work experience, even though coding isn’t his favorite aspect of imaging science.

“I did quite a bit of programming,” he says. “But I prefer to work with people.”

In the rare instance that he has free time, he enjoys road biking and has sung in two different a cappella groups. He also serves as an unofficial mentor for younger imaging science students and manages to maintain an impressive 3.8 GPA. He cites the imaging science faculty as being instrumental in his success.

“There is an excellent student to teacher ratio,” he says. “I suggest that all students take advantage of the program and the opportunity to learn multiple disciplines.”