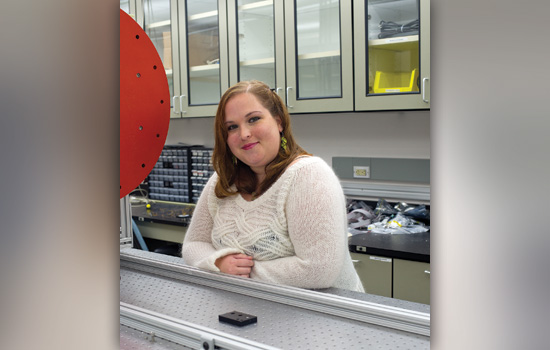 Creativity—in the forms of both imaging science research or quilting—comes easily for Kim Kolb, a graduate student in the Chester F. Carlson Center for Imaging Science. Go to kimkolbquilts at www.Etsy.com to see her quilts, decorations and accessories.

Kim Kolb’s Ph.D. crunch culminated  in a whirlwind trip to Florence, Italy,  that had nothing to do with the  Medici, DaVinci or the Arno River.  (Well, perhaps DaVinci.)

Kolb, a graduate student in RIT’s Chester F. Carlson Center for Imaging Science, arrived in time for the Scientific Detector Workshop on Oct. 4 to share findings about an imaging system that could bring higher sensitivity and clearer vision to space missions.

Imaging arrays of Geiger-mode  avalanche photodiodes, or GM-APDS, count each photon, or unit of light,  carried in an “avalanche,” or a flurry of electrons. The technology was developed at Massachusetts Institute of Technology Lincoln Laboratory and advanced in  partnership with RIT’s Center for Detectors in the College of Science with funding from the Gordon and Betty Moore Foundation.

Kolb spent the summer testing and characterizing the devices in the RIT Center for Detectors. In September,  she and her colleagues irradiated three  of the detectors at Massachusetts General Hospital Francis H. Burr Proton Therapy Center to imitate the damaging effects  of space.

The posters Kolb presented in Florence, and the paper published in the conference proceedings, describe those results, which measure the usability of the radiation-damaged detectors.

Early this fall, she won a fellowship from NASA’s Earth and Space Science program to compare and contrast the  new Geiger-mode photodiodes with  two other single-photon detectors— linear-mode avalanche photodiodes  and electron-multiplying charge-coupled devices. But most of her original work and contributions will have to do with  the GM-APDS, Kolb says. Her dissertation will recommend the best single  photon counting device for specific NASA  applications, including the detection of exoplanets—or Earth-like planets  outside our solar system—high-contrast imaging, adaptive optics and array-based LIDAR.

“Kim’s research has the potential to dramatically transform our perception  of the universe and also our ability to probe the human body,” says Don Figer, director of the Center for Detectors at RIT. “She has been more deeply  embedded in the center’s research than any other graduate student we have had, and she is now in a unique position in the world to do the most meaningful development of new photon-counting detectors.”

Kolb initially joined the Center for Detectors as a senior undergraduate in the microelectronics program. After  gaining industry experience, she returned to RIT on a fellowship from the military contractor BAE Systems to pursue a  master’s degree from the Center for Imaging Science.

“I feel really lucky,” she says. “There’s a lot of opportunity that I’ve been given that I feel I need to live up to.”

Results from Kolb’s research on the Geiger-mode photodiodes will further  the center’s bid to develop technology suitable for NASA exoplanet missions and to uncover the physics behind  mysterious dark matter and the universe-accelerating force dark energy.

“At the end of the day, all I’m trying  to do is to count photons,” Kolb says.  “It might seem tedious and small to get  so embroiled in tiny details and incremental improvements, but the more  photons we can collect, the more we  can know. It’s about exploring the  universe. It’s about exploring our home on a bigger scale.”