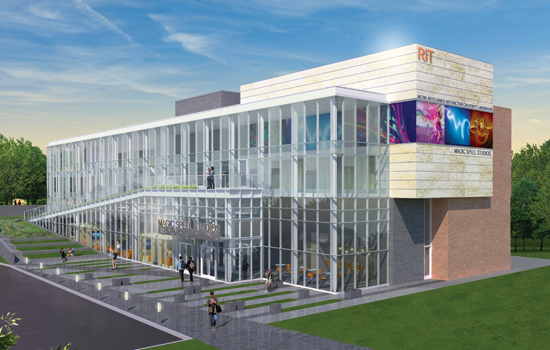 Through MAGIC Spell Studios, RIT is creating a public-private partnership to capitalize on the university’s faculty expertise and student talent and create new businesses.

RIT is at the epicenter of a public-private partnership that could catapult the region as a leader in the rapidly growing digital media industry.

RIT has received a total $13.5 million in funding from New York state, plus $3 million from Dell and $12.4 million from Cisco Systems Inc. that will be used to launch MAGIC Spell Studios, a university program that will link RIT’s internationally ranked academic programs with high-tech facilities needed to commercialize computer gaming, film and animation, graphic design and imaging sciences projects.

“We are thrilled that Governor Andrew Cuomo and the state leadership see the economic development value in our MAGIC Spell Studios, and we are very appreciative of this essential support,” said RIT President Bill Destler. “And we are especially pleased to have such distinguished corporate partners as Cisco and Dell. Together, we will create a center that will contribute significantly to the transformation of the Greater Rochester economy.”

“RIT is a pioneer in the digital media industry — and today, we’re setting the stage to bring that innovation to the next level,” Gov. Cuomo said. “This investment will open the door to limitless possibilities through MAGIC Spell Studios, and I am proud that our administration is helping to further RIT’s potential. Today is a reminder of how New York’s high-tech economy is moving forward, creating jobs and new opportunities in our communities, and I look forward to seeing the project’s long-term success.”

A state-of-the art studio, to be located in a new building on RIT’s campus, is expected to create 35 to 50 jobs in the first five years, with a goal of 100 jobs over the next 10 years. It will be focused on helping RIT students launch companies right here, propelling an industry that has been taking hold locally with entrepreneurial enterprises such as Darkwind Media, a company created by four RIT students that employs 17 and is moving into RIT property at 40 Franklin St. in downtown Rochester as part of the START-UP NY program.

“As someone who achieved a Bachelor of Fine Arts in graphic design from RIT, I couldn’t be more excited about the contribution that SMP and Cisco are making through this partnership,” said Kristin Rorapaugh, CEO of SMP Corp., the local distributor for Cisco. “As a fellow entrepreneur I look forward to working with all the students who launch their businesses as a result of this initiative.”

“Dell is thrilled to be a part of the remarkable work being done here at RIT,” said Ed Cichone, director of enterprise solutions for Dell. “The work by MAGIC Spell Studios promises to redefine digital media, game design and development, and will be a valuable element of economic development in the Rochester area. New York state, Dell and RIT’s efforts are well aligned to make the IT leaders of today and tomorrow Future Ready.”

Creation of MAGIC Spell Studios, with investment from the state and industry, will make the Rochester region highly competitive for attracting and developing a digital media cluster. The digital media field takes advantage of increasing convergence between the film/animation and video gaming industries, visible by the tools and methods used to create such blockbuster films as the Lord of the Rings and Iron Man, as well as others.

On the gaming side, industry analysts predict that with explosive consumer demand for smartphones, tablets and other devices, the international market will reach $102.9 billion by 2017. According to the Entertainment Software Association, the video game industry grew four times faster than the American economy between 2009 and 2012, with employment up by more than 30 percent and the average employee earning average annual compensation of up to $95,000.

Among the graduates of its nationally ranked School of Film and Animation are several Academy Award winners. MAGIC Spell Studios would tap into the talented pool of RIT students to make production assistance available to filmmakers, allowing the region to create new opportunities for the state’s popular film and television tax credit program, which Gov. Cuomo has championed as an economic development tool. RIT has experience in this arena, including placing students as camera production assistants for the Rochester-filmed portions of The Amazing Spider-Man 2.

“The largest budget item on any film budget is labor,” said Malcolm Spaull, administrative chair for RIT’s School of Film and Animation. “MAGIC Spell Studios offers skilled and professional labor at very affordable rates. The reputation of RIT film graduates’ on-set capabilities are second to none and this initiative allows for the benefit of these collective talents to be available to film productions, while giving these new professionals important experience and résumé building opportunities.”

RIT’s game design and development program is consistently ranked among the top in the country, and its alumni are industry leaders in computer science, software engineering, computing and information science and imaging science. Alex Kipman, a 2001 graduate of RIT’s B. Thomas Golisano College of Computing and Information Sciences, is named as the primary inventor on more than 100 patents since joining Microsoft in 2001 and has led four major breakthrough products for the company, including Kinect in 2010 and Microsoft HoloLens, which will bring holograms to Windows.

Two digital media projects in design at MAGIC have garnered numerous industry awards. Super Daryl Deluxe won the 2015 Intel University Games Showcase and the 2015 Microsoft U.S. Imagine Cup and is headed to compete in the Microsoft World Semifinals. The game’s creators, two RIT students, are incubating a gaming company in MAGIC Spell Studios. Another gaming project, Splattershmup, created by an RIT class, is being showcased at the Digital Games Research Association in Germany.

One of MAGIC Spell Studios’ goals is to create local job opportunities, giving talented graduates and others a reason to stay, helping reverse “the brain drain” of local college graduates. MAGIC Spell Studios would join a growing industry cluster, including START-UP NY company Darkwind Media, which is part of a downtown Innovation Zone. An industry cluster is attractive to job seekers because it offers a broader array of future opportunities, making it more likely they can stay in the region even if they switch employers.

“RIT produces talent that helps drive the industry at every major games studio and internationally, with alumni as close as Rochester and as far away as Tokyo,” said Andrew Phelps, founder and director of RIT’s Center for MAGIC (Media, Arts, Games, Interaction and Creativity), under which MAGIC Spell Studios operates. “The MAGIC Spell Studios effort is focused not just on placing our graduates in existing studios, but rather on growing smaller studios and founding new ones, with the current industry trend moving away from a few large publishers toward several small and mid-sized independent studios.”

Destler said MAGIC Spell Studios is the perfect example of how a university can both serve its students well and be an economic driver. 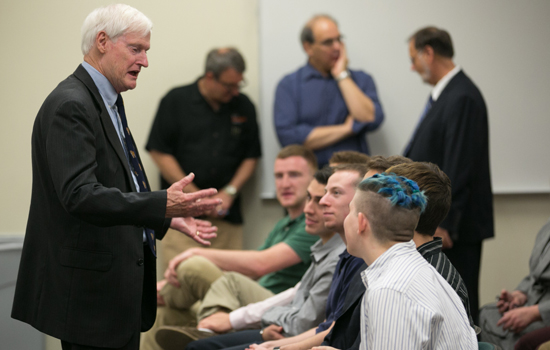 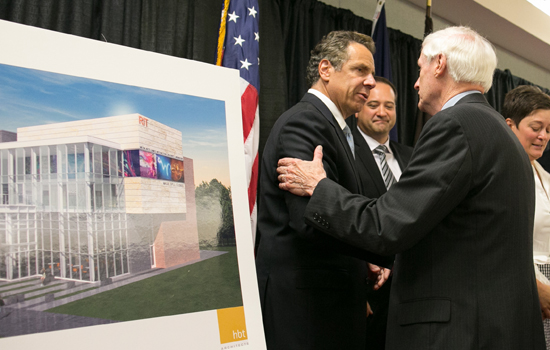