Inspiring students with enthusiasm and curiosity 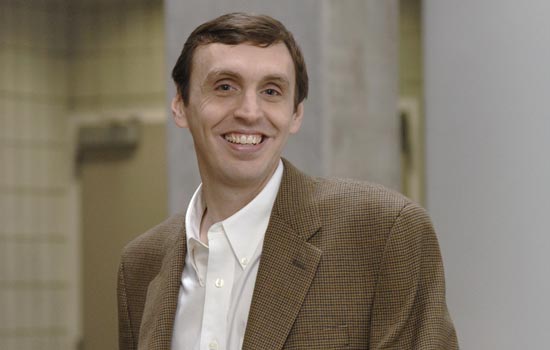 Harkin: Inspires students by bringing enthusiasm and curiosity to the classroom

Mathematics runs in the extended family for Professor Anthony “Tony” Harkin, whose father, father-in-law and brother-in-law are all mathematicians. Harkin absorbed his father’s enthusiasm for mathematics as a young boy. He saw how his father, then a professor at State University of New York at Brockport, enjoyed teaching and doing math.

“Mathematicians really love what they do, and I saw it in my father,” Harkin says. The winner of this year’s Richard and Virginia Eisenhart Provost’s Award for Excellence in Teaching, Harkin conveys some of that same enthusiasm and sense of curiosity to his own students. “What I like about RIT students is that they have the same attitude as I do,” says Harkin, an assistant professor in the School for Mathematical Sciences in the College of Science. “They just enjoy being immersed in science and technology, and when they take classes they know that mathematics is important.”

Harkin joined RIT three years ago after completing a post-doctoral fellowship at Harvard University. He earned his doctorate in mathematics at Boston University, a master’s in scientific computing at Massachusetts Institute of Technology, and bachelor’s in mathematics and physics at SUNY Brockport.

“What’s unique about RIT is that it’s an institute of technology, and everyday we get to work on the sorts of things that we saw at the Imagine RIT Festival,” Harkin says. “I try to convey to students the fun of exploring the frontiers of math and science and being able to work on the kinds of projects they’re surrounded by at a place like this.”

Harkin has many research interests, including applied mathematics, and directs the Center for Applied and Computational Mathematics. This branch of math tries to solve real-world problems using mathematical modeling, numerical analysis and other mathematical tools for analyzing equations and assumptions. Applied mathematics is often a collaborative effort, tapping multiple disciplines to model, for instance, meteorological phenomena, such as cyclones and tsunamis (using partial differential equations) or to solve problems in analyzing networks like electrical grids or scheduling problems of an airline (using tools of optimization theory).

The Consortium for Mathematical Methods in Counterterrorism is also one of Harkin’s interests. He and colleague Bernard Brooks co-organize an annual conference with Harkin’s longtime friend, Jonathan Farley, a mathematician at Caltech. Harkin created a Web site clearinghouse on mathematics and counterterrorism. Harkin and Brooks’ long-term goal is to secure funding for the consortium to bring speakers to RIT and to support student research.

“I enjoy the balance at RIT of doing high-quality teaching and high-quality research and, for me, you can’t separate them. As professors we want to show by example that we’re using mathematics. We’re showing students that by following our curiosity they can do the same.” Harkin adds: “And there’s a sense of obligation to the next generation. My professors passed along their knowledge to me, and I feel a duty to the next generation to help them reach their potential.”