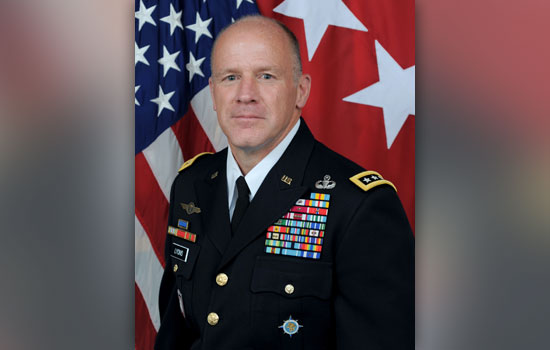 As the 13th USTRANSCOM commander, Lyons leads more than 144,000 logistics and transportation professionals. Lyons was promoted to the rank of four-star general before he was confirmed as commander.

Lyons’ experience spans 35 years of military service. Lyons, who was a member of ROTC at RIT, began his career in Germany during the Cold War and subsequently held a wide variety of assignments to include command of troops at every level, multiple operational deployments and more than six years of experience in joint assignments.

As a battalion commander in 2003, he participated in 3rd Infantry Division’s major combat operations to invade Iraq. Since 2003, he has spent more than 40 months deployed to the U.S. Central Command area of responsibility in support of Operation Iraqi Freedom and Operation Enduring Freedom in Afghanistan. He also served as the 14th USTRANSCOM deputy commander from 2015-2017.

“I enjoyed my time at RIT,” he said. “It was both academically and physically challenging in a way that helped shape a passion for lifelong learning.”