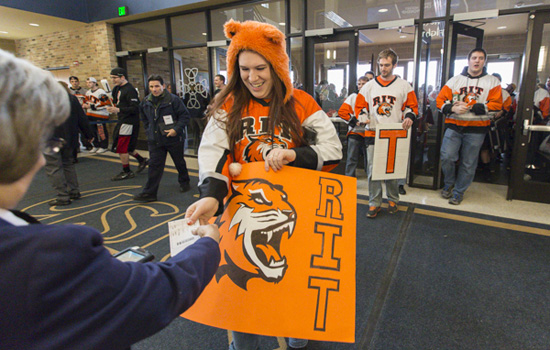 RIT Tiger spirit was felt across the country this weekend as students, alumni, faculty and staff gathered in a variety of places to cheer on the men’s hockey team in the NCAA Tournament.

RIT Tiger spirit was felt across the country this weekend as students, alumni, faculty and staff gathered in a variety of places to cheer on the men’s hockey team in the NCAA Tournament.

On the Henrietta campus, hundreds — many wearing RIT hockey jerseys — gathered both Saturday and Sunday evenings to watch the playoff games on the screens at the Gene Polisseni Center, dining on pizza and other goodies provided by the university to mark the celebration.

And on the Notre Dame campus in South Bend, Ind., site of the games, the team was cheered on by its loyal RIT Pep Band and Corner Crew, whose members boarded a bus at 5:30 a.m. Saturday to make the road trip, returning to campus early this morning. More than 50 alumni from Indiana, Michigan and the Chicago area also came to support the Tigers and attended a pre-game party on the Notre Dame campus prior to the Minnesota State Game.

It was an exciting finish to a magical season for both RIT men’s and women’s hockey, which started with the opening of the Gene Polisseni Center and ended with NCAA Tournament Elite 8 appearances.

Despite the loss to the University of Nebraska Omaha on Sunday, the men’s team made history Saturday in the victory over Minnesota State. It was the first time in the history of the NCAA Hockey Tournament that a No. 16 seed upset a No. 1.

For RIT students and alumni, it was an exciting run and a chance to show off their Tiger pride.

“The No. 1 experience about this whole thing has been the social aspect,” said Teryn Ryone, a fourth-year mechanical engineering student from New Field, N.Y., who plays trumpet in the band. “We have really gotten to know each other as a band being with each other the past few days.”

The Corner Crew and Pep Band electrified the Notre Dame arena. “I think we give the team extra energy when they need it. The team feeds off it,” said Ryone. “When the team needs a lift, we play the ‘hey song.’ It’s our all-purpose song to get everyone going.”

Gabi Potts, an industrial engineering major from Danville, Vt., was with the band during the 2010 NCAA regional run in Albany, which led to the men’s team reaching the Frozen Four.

“There are a lot of amazing similarities,” she said prior to Sunday night’s loss. “There have been a lot of heart-beating moments. It’s unbelievable. It’s been a great weekend and many of us will be back for 8 a.m. classes.”

Many of the alumni joining the celebration came decked out in Tiger gear.

“We have a lot to be proud of at RIT,” said Greg Pollock, a 2012 graduate and former Student Government President now living in Michigan. “Hockey is our unifying piece and the glue that brings everyone at RIT together.”

Elizabeth Garver ’82 (MFA, weaving and textile design), and her husband, Richard Gray ’82 (MFA, photography), didn’t have to travel far for the game. They live in South Bend, Ind.

“We both had a terrific experience at RIT and fond memories,” said Gray, who chairs the art, art history and design department at Notre Dame. “Sports is the great ambassador. It is great to be here to support the team.”

Lou Spiotti, RIT’s executive athletic director, greeted alumni throughout the weekend and spoke of how proud he was of both the men’s and women’s teams and the excitement they have brought to both the campus and the Rochester community.

“I think matching rings are in order for these amazing men and women,” added Sandra Johnson, RIT senior vice president for Student Affairs.