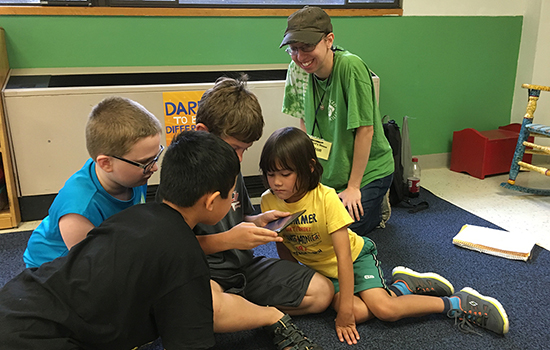 Sarah Bishop, a fourth-year game design and development student from Annapolis, Md., play tests her latest video game creation with youngsters at Margaret's House. Bishop and her student development team created “Grasshopper's Winter” last fall and continued to develop the game as part of the 10-week summer Co-Up program, a partnership between RIT's Simone Center for Student Innovation and Entrepreneurship and the MAGIC Center.

For the second consecutive summer, Rochester Institute of Technology’s Center for Media, Arts, Games, Interaction and Creativity (MAGIC) has earned the right to brag about the unique digital projects multidisciplinary student teams have created over the last 10 weeks.

Each summer, MAGIC’s Co-Up program, in partnership with the Simone Center for Student Innovation and Entrepreneurship, offers students the opportunity to earn cooperative education experience and a stipend, work alongside faculty and staff mentors, and gain valuable business advice—all while developing digital products fit for the marketplace. The 10-week program was made possible through financial support from members of the RIT Board of Trustees.

“From the beginning of the summer to the end, the games look different, the software looks different and the questions that the students are asking are different,” said Andrew Phelps, professor and director of RIT’s MAGIC Center. “Students are thinking about how to accomplish their goals, and we are fortunate that the RIT Board of Trustees continues to see the value and potential of this Co-Up program and our students.”

Phelps also said that each year the kinds of projects that are showcased are varied and unique, and often extend beyond the game space.

“It’s important that our Co-Up students remember that the end of the summer isn’t the end of their projects—it’s the beginning,” he added. “They are now asking themselves, ‘Where do we go from here and how do we get there?’”

This summer’s five student teams and their projects were:

Developer Sarah Bishop says Grasshopper’s Winter is “a game about small bugs and their busy lives.” The RIT students created the all-ages, family-friendly, touch-enabled mobile app that transposes the classic “Ant and the Grasshopper” tale from simple children’s book to a “click-and-stick” mobile game. The team plans to publish and sell the app and will publicize the game on social media and at RIT’s Imagine RIT festival in the spring.

Attunement Arena is a fast-paced combat game focused on the player’s desire to harness control over powerful elements. Before a match, each player selects different abilities and modifies them with rituals to develop their personalized characters. The game’s creators developed matches on thematic stages with shrines where objectives will become available for battle. Players must balance between attempting to claim an objective and harming their opponents.

The team plans to sell its game on both the Steam and Twitch platforms before the end of the year, and secure crowdfunding through the Patreon platform.

Shareeek is an advertising web application for consumers and marketers that operates through a reward system. Users are given the opportunity to watch a short advertisement and answer a short survey. In exchange, these users are entered into a lottery in which they become eligible for a monetary prize. This form of “agreed-upon advertising” allows users to make the active decision to view company advertising, resulting in a partnership between users and advertisers. The team intends to initially market its app locally, with the hope of supporting student- and alumni-run businesses.

Gibraltar, a U.S. Imagine Cup “Games Division” finalist, allows its players to move adorable robots around a board in an attempt to capture territory and claim victory for their faction. Developer John Miller and his partner Danielle Carmi are hoping that they have succeeded in creating a light-hearted, yet competitive and intellectual experience that friends can play on the bus or during lunch. The fast-paced game can be played on tablets, opening it to a larger group of players who will appreciate it for its accessibility and ease of play. Gibraltar will release on several platforms and services including Steam and the itch.io website.

The student team of Children Among Giants has created Whisper of a Lullaby, a third-person adventure game developed using the Unreal 4 engine. Users play from the perspective of a dreaming child and experience emotional trials and tribulations that need to be overcome in order to grow throughout the game.

Originally developed in 2015 as a final project for Game Design and Development II, the game will be produced in alpha or demo format for display at conventions such as Game Developers Conference and PAX (Penny Arcade Expo).