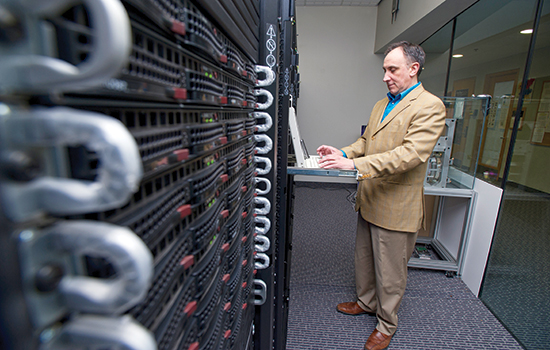 The supercomputer at RIT’s Center for Computational Relativity and Gravitation was built over the last decade with National Science Foundation funding. An NSF and RIT-funded upgrade this year will double its capacity.

Rochester Institute of Technology researchers helped pinpoint the precise location of a gravitational wave signal—and the black hole merger that produced it—detected by gravitational wave observatories in the United States and in Europe.

For the first time, LIGO and the French-Italian Virgo were used to triangulate the position in the universe where the binary black hole merger occurred 1.8 billion years ago. The black holes are 25 and 31 times the mass of the sun before the collision and 53 times the sun mass after, when a merged black hole formed.

The signal was detected on Aug. 14 by the LIGO detectors in Louisiana and Washington and the Virgo detector near Pisa, Italy. The findings were announced today in a news conference in Turin, Italy, and will appear in Physics Review Letters.

The addition of the third observatory has widened the window on the universe, said RIT professor Carlos Lousto. “We now can pinpoint where those black holes collided in the universe with 10 times higher precision than we had with only two detectors,” Lousto said. “Astronomers can look more accurately toward this direction in sky with conventional telescopes to see if there is an electromagnetic counterpart to such cosmic collisions.”

John Whelan, RIT associate professor and the principal investigator of RIT’s LIGO group, said, “Our Virgo colleagues, who have been collaborating on the analysis since our first joint initial detector runs 10 years ago, have now joined the advanced detector network. We now have, for the first time, three advanced gravitational wave detectors observing together.”

Richard O’Shaughnessy, RIT assistant professor, adds that, “with Virgo, we can now reliably point to where a gravitational wave signal came from. We can tell astronomers when and where to point their telescopes.”

The current study cites 2005 breakthrough research by Lousto; Manuela Campanelli, RIT professor and director of the Center for Computational Relativity and Gravitation; and Yosef Zlochower, RIT associate professor, which solved Albert Einstein’s strong field equations. The group was one of the first to simulate a black hole on a supercomputer. Their “moving puncture approach” has been adopted by other research groups and helped lay the foundation for gravitational wave astronomy.

“Our supercomputer simulations of black-hole collisions continue to be crucial to determine the astrophysical parameters of those extreme objects and they provide important information for modeling their history, from the death of their progenitor stars to their final merger into a larger black hole,” Lousto said.

Educating the next generation of gravitational wave astronomers is taken seriously at RIT’s Center for Computational Relativity and Gravitation. 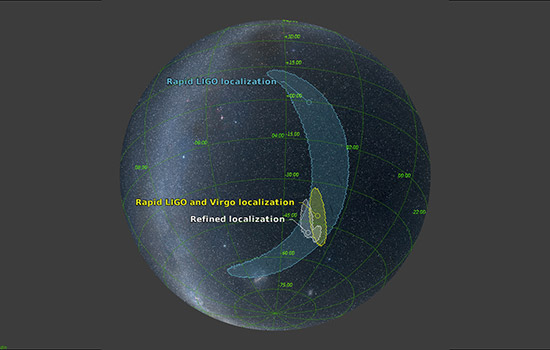 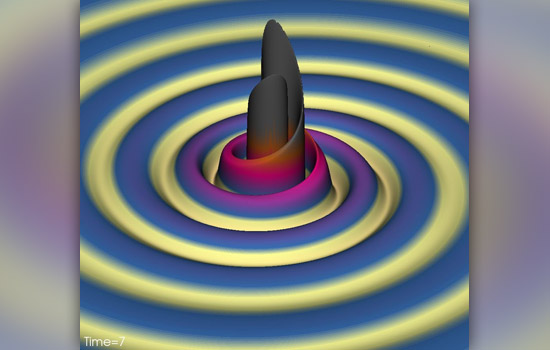 A simulation of gravitational waves produced by the collision of binary black holes. Center for Computational Relativity and Gravitation, Nicole Rosato