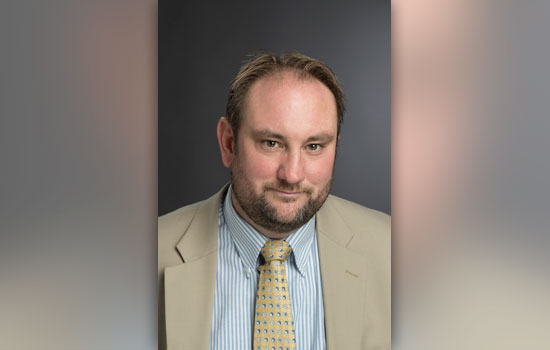 Michael Laver, chair of the Department of History at Rochester Institute of Technology, has been named an ACE Fellow for the 2018-19 academic year by the American Council on Education (ACE).

The ACE Fellows Program, established in 1965, is designed to strengthen institutions and leadership in American higher education by identifying and preparing faculty and staff for senior positions in college and university administration. Forty-five Fellows, nominated by the senior administration of their institutions, were selected this year.

“It’s a real honor to be nominated for the ACE fellowship, and I hope that the leadership skills I learn over the course of the year will prove useful at RIT, especially as we embark on this new chapter of our university’s history,” he said. “While I’ll be studying leadership in higher education in general, I’ll be focusing in more specifically on interdisciplinarity and the opportunities that collaboration across the university can help guide RIT into an increasingly complex higher education future.”

Laver, who was nominated for the program by RIT Provost and Senior Vice President for Academic Affairs Jeremy Haefner, will spend the academic year at a college or university to be determined later. The ACE Fellows Program combines retreats, interactive learning opportunities, campus visits and placement at another higher education institution to condense years of on-the-job experience and skills development into a single semester or year. ACE Fellows spend an academic year working with a college or university president and other senior officers at the host institution, while also developing a network of higher education leaders from across the country and abroad.

“I am delighted that Professor Michael Laver will be an ACE Fellow for 2018-2019,” Haefner said. “Michael has already demonstrated his ability to lead at the institutional level, having co-chaired the Middle States Self Study Committee. The ACE Fellows Program will enable him to study higher education at various institutions and bring this learning back to RIT.”

Haefner said RIT “has a proud tradition of both sending participants to the program, as well as hosting Fellows from other colleges and universities because we believe strong, informed leadership is essential to the success of higher education.”

Nearly 1,900 higher education leaders have participated in the ACE Fellows Program over the past five decades, with more than 80 percent of Fellows having served as senior leaders of colleges and universities.

“For more than a half-century, the ACE Fellows Program has been a powerful engine fueling the expansion of a talented and diverse higher education leadership pipeline,” said ACE President Ted Mitchell. “We are excited to welcome this new class of Fellows and look forward to each enjoying a transformative experience that will help advance individual leadership readiness while also enriching the capacity of institutions to innovate and thrive.”

Laver, who has been at RIT for 10 years, teaches East Asian history. His research focuses primarily on the Dutch East India Company, and more broadly, early modern Japan. His most recent book, The Sakoku Edicts and the Politics of Tokugawa Legitimacy, was published by Cambria Press in 2011.

He served as co-chair of RIT’s accreditation process (Middle States Commission on Higher Education) in which RIT was one of 15 institutions piloting new accreditation standards. He also served as chair of the Academic Senate for two years, a time in which RIT adopted an ambitious new strategic plan and overhauled its tenure and promotion policies. And he served as program director for international and global studies, an interdisciplinary degree program in the College of Liberal Arts in which position he was responsible for overhauling the governance of the degree program to reflect a more robust interdisciplinary involvement.

Laver is an ordained priest in the Episcopal church and serves the parish of Saint John’s in Sodus, N.Y. He serves on the board of the Lutheran-Episcopal Campus Ministry at RIT and teaches a course in the histories of Christianity.