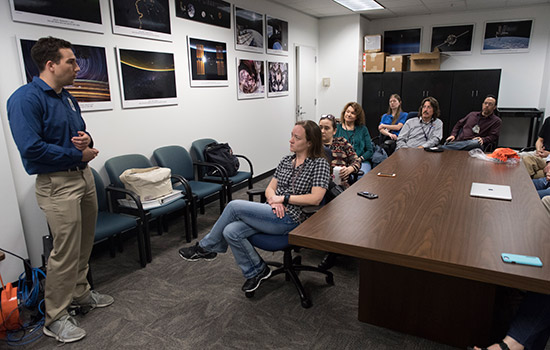 Kevin Moser, an imaging science student from Rochester, Minn., presented an algorithm on May 3 to NASA officials at Johnson Space Center.

An informal collaboration among RIT students, alumni and professors culminated in a meeting last week at NASA’s Johnson Space Center in Houston.

Kevin Moser, an imaging science student from Rochester, Minn., and RIT alumnus Peter A. Blacksberg ’75 (photography) made the trip south to meet with the heads of various NASA departments and present an algorithm that Moser spent the last year developing under the Center for Detectors at RIT.

Moser’s work represents the culmination of research and development done by several student predecessors on the Cosmic Radiation Damage Image Repair (CRIDR) project. The algorithm he developed will remove the effects of bad pixels damaged by cosmic rays that penetrate detectors in the commercial cameras used to take photographs by astronauts on the International Space Station. It replaces values in the bad pixels with a statistical representative of values in surrounding pixels.

“This project was initially just summer work for me, but I had the opportunity to turn it into my senior project and continue to work on it throughout the year,” said Moser, who became involved after responding to an online job posting in 2016. “Seeing it all come together and having the opportunity to visit the Johnson Space Center was really rewarding.”

Moser will present his work during the Center for Imaging Science senior project presentations on Friday, May 12.

Blacksberg, who has a passion for both photography and space, bought a ticket to hear astronaut Don Pettit speak in New York City in 2014. During the lecture, Pettit pointed out spurious pixel values in certain images that he said were the result of damage caused by high-energy particles that cause detectors in cameras to deteriorate when exposed to the harsh radiation environment in space.

Blacksberg recognized this as a problem that needed a solution and knew that RIT was the place to find it.

“I approached Dr. Pettit after the lecture and introduced myself,” said Blacksberg. “I asked him if he was familiar with RIT and gave him a business card. Little did I know that a friendship would form.”

In April 2015, Blacksberg arranged for Pettit to visit campus to present his work to the RIT community. It was during this visit that Pettit met with a handful of RIT professors and student researchers to discuss ways to reduce the damage to photographs caused by cosmic rays in space.

Don Figer, director of the Center for Detectors, was part of the meeting.

“Peter and Don came to us with this problem a few years ago, looking for a way to ‘fix’ damaged images,” Figer said. “This project is very different than any other project I’ve worked on because ours tend to have a standard project management flow, and this one does not. It’s more collaborative, and we’ve had several students work on it, Kevin being the current one.”

When Pettit was pointing out the damaged pixels in his images, he was referring to regions of his photographs that contained pixels with values of stark contrast to their neighbors. Visually, these appeared as very bright spots in an otherwise dark scene and vice versa. A similar effect can be seen in a flat-screen TV that has pixels that are permanently “on.”

“When a photograph is taken in space, some of the pixels are altered in a way that causes them to produce their own signal,” said Figer. “Detectors normally produce a little bit of signal anyway, but cosmic rays are damaging the detectors in a way that is causing the pixels to produce bigger signals than they typically would. We use the word ‘damage’ to describe it.”

While damaged images could be opened in Photoshop and touched up individually, this process is unfeasible for NASA, where images come in at a rate of 10,000 to 50,000 per week.

The algorithm developed by Moser and others at RIT provides a post-processing fix to the problem.

“Kevin’s algorithm isn’t finding the real information and putting it back in the pixel, rather it’s finding the bad pixel and then replacing the signal in that pixel with an average of the surrounding pixels,” Figer said.

Although the algorithm does produce some false positives and false negatives, it marks a big step forward in the efforts to find a long-term solution. Pettit said that he is excited to see the results of the continued efforts in the future.

“I can see many applications for the process both for my photographs and those of Earth-bound astrophotographers,” Pettit said. “I am especially pleased to have RIT involved with our NASA photography and photo science folks—many of them are RIT alumni. What really matters is inspiring the next generation to be involved in science and discovery, and I think RIT is doing just that.” 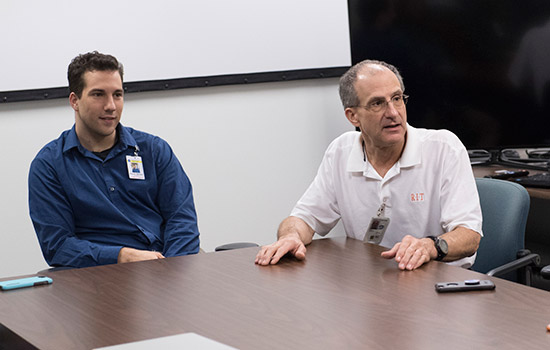 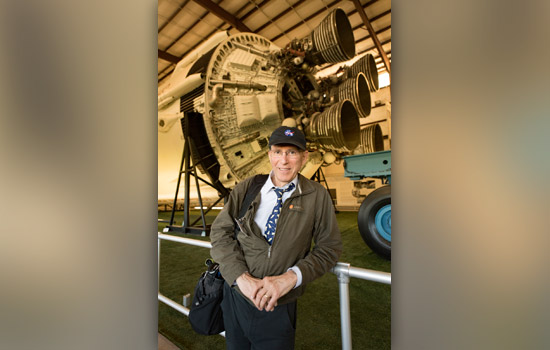 Peter A. Blacksberg ’75 (photography) arranged the meeting with NASA officials.