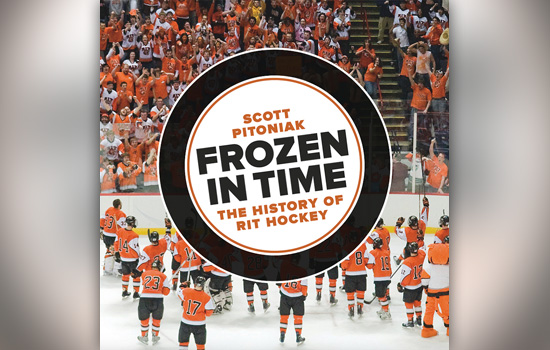 Scott Pitoniak’s new book, Frozen in Time: The History of RIT Hockey, features stories from the people that brought the RIT hockey program from a rag-tag club to prominence.

From hand-me-down uniforms to winning it all at multiple NCAA tournaments, the history of RIT hockey is a tale of persistence and perseverance.

Award-winning columnist and author Scott Pitoniak explores the stories and people behind RIT’s men’s and women’s hockey teams in his new book, Frozen in Time: The History of RIT Hockey, published by RIT Press, the scholarly publishing enterprise at Rochester Institute of Technology.

Pitoniak’s first exposure to the RIT hockey program came in February 1985, when the new Democrat and Chronicle journalist covered just a few games and realized that RIT had the talent to make a run at achieving another title. Sure enough, RIT won the NCAA Division III ice hockey championship that same year.

“Throughout the years, I remained impressed with the program’s consistent excellence, both on the ice and in the classroom, and the fans’ Pacific-Ocean-deep passion and zany antics,” said Pitoniak. “The goal of the book was to capture the people, places and moments that have made the sport such a vital part of campus life and pride for nearly six decades.”

The colorful book—with 150 photos—traces the school’s hockey roots back to the humble beginnings as a hockey club in the late 1950s, when a motley crew got the program off the ground. It also explores the daunting challenges pioneering women overcame in order to launch their program in the mid-1970s.

The book chronicles the 2010 men’s squad that reached the NCAA Frozen Four, just five years after making the leap from Division III to Division I, and the 2012 women’s team that won the NCAA Division III National Championship on home ice. It also introduces the Corner Crew cheering section, the new home of the Tigers—the Gene Polisseni Center—and includes a list of individual and team records.

You don’t have to be a sports fan to appreciate this book. Pitoniak weaves together the evolution of both award-winning teams with engaging first-person interviews. His archival research introduces readers to many of the unique personalities that have made RIT hockey an evolving success.

Book signings with Pitoniak will be held: