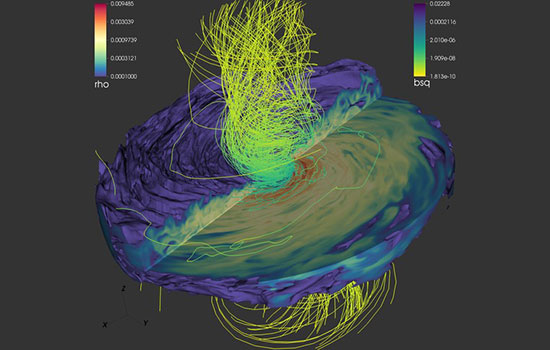 A new simulation of supermassive black holes—the behemoths at the centers of galaxies—uses a realistic scenario to predict the light signals emitted in the surrounding gas before the masses collide, said Rochester Institute of Technology researchers.

The RIT-led study represents the first step toward predicting the approaching merger of supermassive black holes using the two channels of information now available to scientists—the electromagnetic and the gravitational wave spectra—known as multimessenger astrophysics. The findings appear in the paper “Quasi-periodic Behavior of Mini-disks in Binary Black Holes Approaching Merger,” published in the Astrophysical Journal Letters.

“We’ve performed the first simulation in which an accretion disk around a binary black hole feeds individual accretion disks, or mini-disks, around each black hole in general relativity and magnetohydrodynamics,” said Dennis Bowen, lead author and postdoctoral researcher at RIT’s Center for Computational Relativity and Gravitation.

Unlike their less massive cousins, first detected in 2016, supermassive black holes are fed by gas disks that surround them like doughnuts. The strong gravitational pull of the black holes that inspiral toward one another heats and disrupts the flow of gas from disk to black hole and emits periodic signals in the visible to X-ray portions of the electromagnetic spectrum.

“We have not yet seen two supermassive black holes get this close,” Bowen said. “It provides the first hints of what these mergers will look like in a telescope. The filling and refilling of mini-disks affect the light signatures.”

The simulation models supermassive black holes in a binary pair, each surrounded by its own gas disks. A much larger gas disk encircles the black holes and disproportionately feeds one mini-disk over another, leading to the filling-and-refilling cycle described in the paper.

“The evolution is long enough to study what the real science outcome would look like,” said Manuela Campanelli, director of the Center for Computational Relativity and Gravitation and a co-author on the paper.

The launch of the space-based Laser Interferometer Space Antenna, or LISA, slated for the 2030s, will detect gravitational waves from colliding supermassive black holes in the cosmos. When operational in the 2020s, the ground-based Large Synoptic Survey Telescope, or LSST, under construction in Cerro Pachón, Chile, will produce the widest, deepest survey of light emissions in the universe. The pattern of signals predicted in the RIT study could guide scientists to orbiting pairs of supermassive black holes.

Bowen and his collaborators combined simulations from RIT’s Black Hole Lab computer clusters and the Blue Waters supercomputer at the National Center for Supercomputing Applications at the University of Illinois at Urbana-Champaign, one of the largest supercomputers in the United States.

In an upcoming paper, the authors will explore further the correlation between gas flowing in and out of the accretion disks and fluctuating light emissions. They will present predictions of light signatures scientists can expect to see with advanced telescopes when looking for supermassive black holes approaching merger. 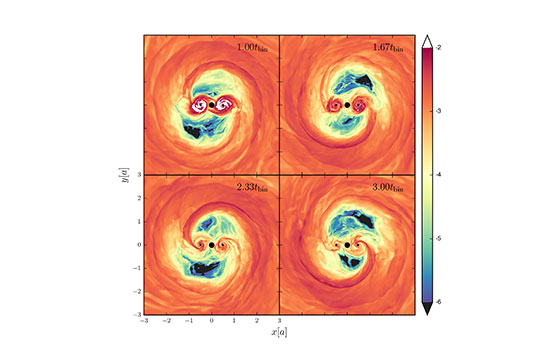 Two supermassive black holes at the center of a large gas disk are on a collision course in a time sequence simulated by RIT scientists. An alternating flow of gas fills and depletes mini disks feeding the black holes, shown above. Characteristic light signals emitted in the gas could mark the location of the invisible masses. (Note: The dot at the center of the image is not part of the simulation.) RIT Center for Computational Relativity and Gravitation 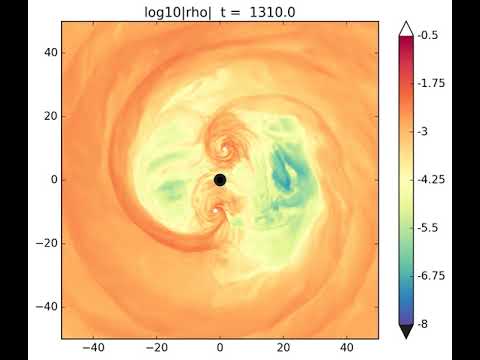